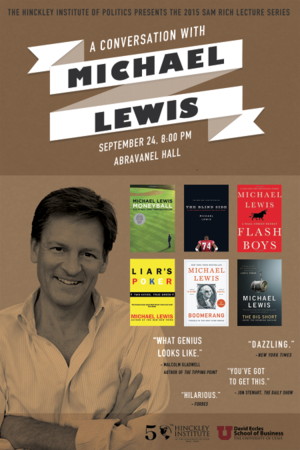 (May 7, 2015) —The University of Utah’s Hinckley Institute of Politics is excited to announce the 2015 Sam Rich Lecture, “A Conversation with Michael Lewis.”

Lewis’ acclaimed New York Times bestsellers include Moneyball, The Blind Side, Flash Boys, Boomerang, and Liar’s Poker—to name a few. His book on the financial meltdown, The Big Short is currently being made into a widely-anticipated film starring Brad Pitt, Christian Bale, Ryan Gosling, and Steve Carrell.

After graduating from Princeton and the London School of Economics, Lewis worked at the bond desk at Salomon Brothers. His bold exposé on the industry shook the nation and resulted in a number-one bestseller “Liar’s Poker.” He left the financial world to become a journalist and frequently contributes to the New Republic, New York Times Magazine, Slate, Vanity Fair, and Bloomberg.

The event will take place at Abravanel Hall the evening of September 24 and promises to sell out well in advance. Tickets will be available for purchase the morning of June 22 from ArtTix, but can be secured a week earlier by registering on pre-sale lists available here.