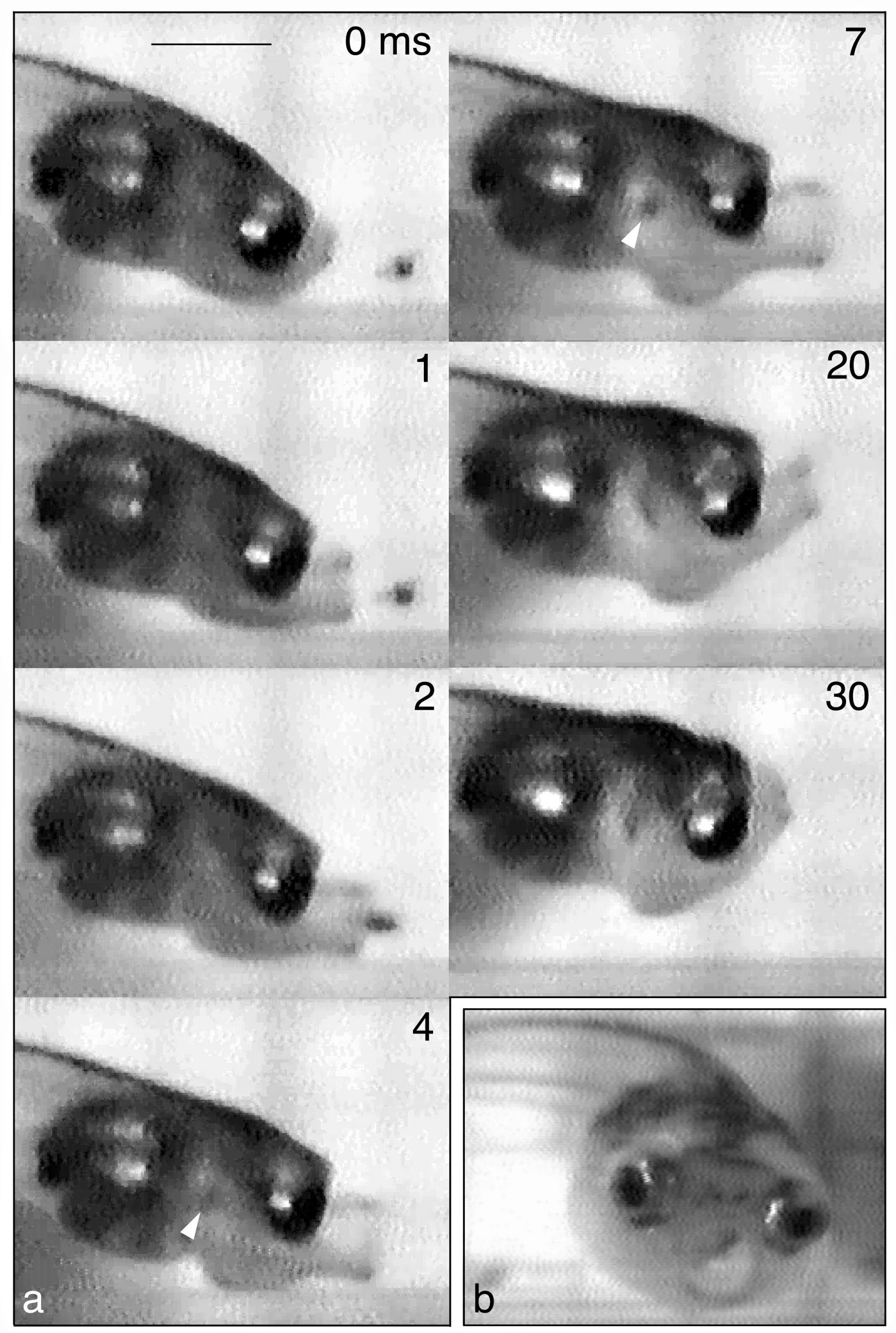 November 6, 2002 — A University of Utah biologist used a high-speed video camera to identify a tiny tadpole’s distinct way of eating dinner. Instead of filtering food from water like other species of frog larvae, the petite polliwog extends its tube-shaped mouth, and then sucks in immature shrimp, water fleas or other prey in a mere six one-thousandths of a second.

“They first track individual prey organisms visually, and then chase and capture them by mouth using a suction mechanism. This feeding behavior is unique among frogs” and similar to what many fish do, scientists wrote in the Nov. 7 issue of the British journal Nature.

Why should anyone care about such unusual dining behavior?

“These animals tell us something about how aquatic animals that are really tiny function, how they face different physical challenges than animals of our size,” says biologist Stephen Deban, a postdoctoral researcher at the University of Utah. “There is incredible diversity in organisms, and organisms have tried all sorts of things to survive and reproduce. I just like to appreciate the diversity, and to see what kinds of bizarre solutions animals come up with to solve problems they face. In this case, the tadpoles have come up with a solution almost identical to what fish have come up with, and it evolved independently.”

Deban conducted the study with Wendy M. Olson, a biologist at Dalhousie University in Halifax, Nova Scotia, Canada, when both worked at the University of California, Berkeley.

Deban currently is spending a few weeks at Wageningen University, The Netherlands, where he is studying salamanders that can shoot their tongues out as much as 80 percent of their body lengths at high speeds.

The Nature study involved larvae or tadpoles of the frog species Hymenochirus boettgeri, the African dwarf clawed frog. They are native to Africa, but are sold in many pet stores as “skin-diving frogs” and raised along with fish in home aquariums.

When they begin feeding, the tadpoles are only 1 millimeter to 3 millimeters long, or roughly one-tenth of an inch, among the smallest known frog larvae, Deban said. He believes their unusual way of eating is a result of their tiny size.

For a tadpole so small, water has a high viscosity, or “sticky, syrupy quality,” Deban says. So pumping water through the mouth to filter out organic debris would be like “running honey through a strainer,” he adds. “But engulfing a whole blob of water with the prey included is easier.”

Other tadpole species use their tiny beaks to scrape organic material from surfaces so they can filter it through their mouths – something the African dwarf clawed frog tadpole cannot do because it lacks a beak.

Deban says scientists have known for decades that the tadpoles are predatory, eating prey such as shrimp larvae, daphnia (water fleas), invertebrate freshwater organisms called rotifers and even other tadpoles of the same species. The new study, using a high-speed video camera and a powerful lens, revealed previously unknown details of the tadpoles’ “really weird” behavior, particularly how they extend their mouths and suck in their prey.

“There is at least one other species of suction-feeding tadpole, but it doesn’t have this goofy mouth that shoots out like a fish [mouth],” Deban says.

“Most other tadpoles swim around and scrape surfaces with their beaks and then filter the resulting cloud of organic stuff that gets kicked up,” he says. “Hymenochirus is unusual in a number of ways. First, it is very small. Second, it is a hunter and chases down its prey. The fact that it’s predatory is highly unusual for tadpoles. Third, when it does catch up to its prey, it sucks it in very quickly with a mechanism that is extremely similar to the mechanism [about half of bony species of] fish use and very unlike anything other tadpoles do.”

Deban got involved in the study because of earlier research in which he used the high-speed video camera to videotape feeding behavior of frogs, salamanders and other amphibians. Olson, meanwhile, was studying the development of African dwarf clawed frogs. Deban and Olson decided to study their feeding behavior.

Deban videotaped the tadpoles by using glass microscope slides to make a tiny aquarium measuring about 3 inches wide, an inch high and one-fifth-inch from front to back. That kept the tadpoles within the camera’s depth of field. Deban says the same kind of high-speed video camera is used in industry to study fast-moving machinery and identify production-line problems.

To suck in prey, the tadpole quickly and simultaneously drops the floor of its mouth, extends its mouth forward and raises its head, increasing the size of its mouth cavity to create suction, he says.

To watch the video of a tadpole eating a brine shrimp, click here: