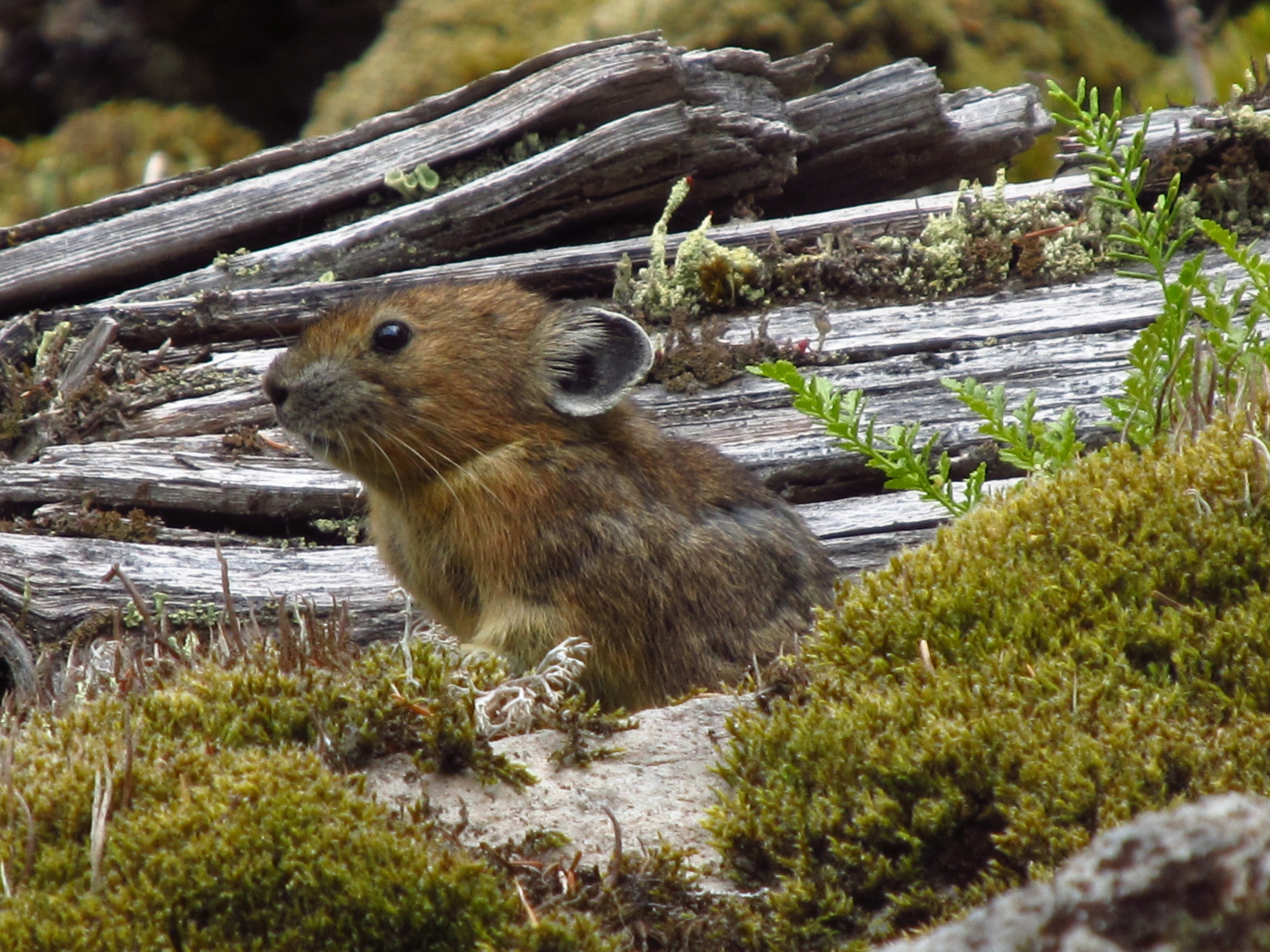 Dec. 18, 2013 – In some mountain ranges, Earth’s warming climate is driving rabbit relatives known as pikas to higher elevations or wiping them out. But University of Utah biologists discovered that roly-poly pikas living in rockslides near sea level in Oregon can survive hot weather by eating more moss than any other mammal.

“Our work shows pikas can eat unusual foods like moss to persist in strange environments,” says biology professor Denise Dearing, senior author of the new study, published online today in the February 2014 issue of Journal of Mammalogy. “It suggests that they may be more resistant to climate change than we thought.”

The study’s first author, biology doctoral student Jo Varner, says: “Some fiber is good, but this is almost all fiber. Mosses are 80 percent fiber. It’s a bit like eating paper.”

“By consuming mosses that grow on the rockslides where they live, the pikas are released from foraging outside the safety and shady heat buffer of the rocks,” where they can overheat or be killed by weasels and hawks, says Varner. “Few herbivores consume moss because it’s so nutritionally deficient. The pikas in our study actually set a new record for moss in a mammal’s diet: 60 percent.”

The study also found the low-elevation pikas “build much smaller food caches to survive the winter, compared with pikas in typical high-elevation habitat,” she adds.

The biologists believe they know how the cute critters do it: Like rabbits and hares, pikas produce a fraction of their feces in the form of caecal (pronounced see-cull) pellets, and reingest them to gain nutrition. (Caecal pellets look like dark, wet blobs versus normal feces that are hard individual pellets.)

“Pikas and rabbits and their gut microbes are the ultimate recycling factory,” Dearing says. “They ingest low-quality food, over and over again, and turn it into high-quality protein and energy. The end product is six times more nutritious than the moss.”

Varner says the findings suggest Northwest residents may want to preserve moss that often covers rockslides, which are known as talus slopes. Moss is collected for horticulture in some areas, and “traipsing all over rockslides and trampling moss cover has become a popular pastime in the gorge,” she adds.

Funding for the study came from the National Science Foundation, University of Utah, the Wilderness Society, Southwestern Association of Naturalists, Society for Integrative and Comparative Biology, and American Society of Mammalogists.

Pikas in the Mist

The order Lagomorpha has two families: one with rabbits and hares, the other with pikas. Pikas are native to cold, alpine climates – often above 8,200 feet elevation – in North America, Asia and Eastern Europe. Although a few species dig burrows, they usually live in rocky areas and crevices near meadows or in talus slopes.

They don’t hibernate, but collect and carry vegetation – often grasses, flowers, fir needles and herbaceous forbs such as lupine, alumroot and yarrow – to their homes to make “haypiles” for winter use.

They are about 6 inches long and weigh one-third pound, with grayish-brown fur, small rounded ears and very little tail. They are very sensitive to heat, dying if they spend more than two hours above 78 degrees Fahrenheit.

“They basically are shaped like spheres, which is optimal for conserving heat,” Varner says. “They have a thick fur coat and a high metabolic rate, which means they generate a lot of heat. The thick fur coat traps it, and so does their spherical shape.”

In parts of the West – including the Great Basin of Nevada and Oregon and, to a lesser extent, Colorado – pikas have gone extinct in some mountain ranges and moved to higher elevations in others. The U.S. government decided in 2010 they were not endangered. Environmentalists disagreed, calling them mascots for climate change.

In the Cascade Range, they live as high as the snow line some 7,000 feet on slumbering volcanoes such as 11,230-foot Mount Hood, east of Portland, Ore. Yet their population extends thousands of feet all the way down the north slope of Mount Hood to the often wet, foggy Columbia River Gorge, which divides Oregon and Washington state at that location. The river there is only about 150 feet above sea level.

In the gorge – which runs roughly 30 miles east-to-west – these American pikas – Ochotona princeps – live among the rocks on moss-covered talus slopes.  The existence of these low-elevation pikas – which also inhabit the Washington side – has been known since at least 1925, Varner says. A 2009 study documented these pikas lived in a warmer, wetter climate than usual. But until now, no one had looked at exactly how they survive.

Varner and undergraduates conducted the study on two talus slopes – each about 3.5 acres – surrounded by a forest of Douglas fir, western red cedar and bigleaf maple near the Gorge Trail near Wyeth, Ore. Each site had at least eight resident pikas.

They studied the sites in 2011 and 2012, mainly during June through August when the pikas were most active.

The scientists surveyed the abundance of lichens, mosses, ferns, grasses, sedges, rushes, forbs, shrubs and trees along the two rockslides. The slopes were 60 percent to 70 percent covered by vegetation.

Three biologists in 2011 and five in 2012 used binoculars in two-hour shifts, watching and counting exactly what species of plants the pikas ate. Each pika was observed at least five times. The diet analysis included only adult pikas, although juveniles from new litters were seen.

“We counted the numbers of mouthfuls of food they ate, and then collected samples of those foods in the amount we saw them eating per mouthful,” Varner says.

Overall, the biologists watched 220 hours of pika behavior, including 1,577 individual bouts of foraging. The food samples were analyzed for how much the pikas ate and for nutrition and fiber content. The researchers also excavated, weighed and replaced several haypiles under the two talus slopes and two other sites.

Sixty percent of the pikas’ diet by dry weight came from moss at both sites, with the rest from grasses, lichens, ferns, forbs, shrubs and some fir needles. The pikas favored two species: hoary rock moss and big red-stem moss. Varner is unaware that pikas have been seen eating moss elsewhere, and “certainly not in this quantity.”

“To our knowledge, this study represents the highest degree of voluntary moss consumption reported for a mammalian herbivore in the wild,” although wood lemmings have survived on a pure moss diet in a laboratory, Varner and Dearing write.

Analysis of the pikas’ caecal pellets showed they contained six times more protein than the moss they ate.

Less snow cover low in the Columbia Gorge – only about 20 days per winter – means the pikas there collect smaller haypiles (about 10 pounds per animal per year by dry weight) for winter than do pikas at high elevations in Colorado (about 60 pounds per animal per year in a 1997 Dearing study). The haypiles contained little moss, but had forbs, shrubs and fir needles high in phenol to preserve the food cache through the winter.

Yet in both places, the haypiles equaled about three ounces per animal per day of annual snowpack, also showing the low-elevation pikas didn’t need to prepare for winter as much because of the availability of their year-round salad bar.

The researchers wondered if nitrogen air pollutants from the Portland area might be absorbed by the moss, making it more nutritious. But the analysis found no support for that idea.

In cooperation with the Oregon Zoo and local wildlife agencies, Varner has helped begin a citizen science program in the Columbia River Gorge so local hikers can help monitor the pikas.

Pikas also exist in some other low-elevations places, including in California’s Sierra Nevada and in lava flows in Idaho and Washington state. How they survive there remains unknown, Varner says.