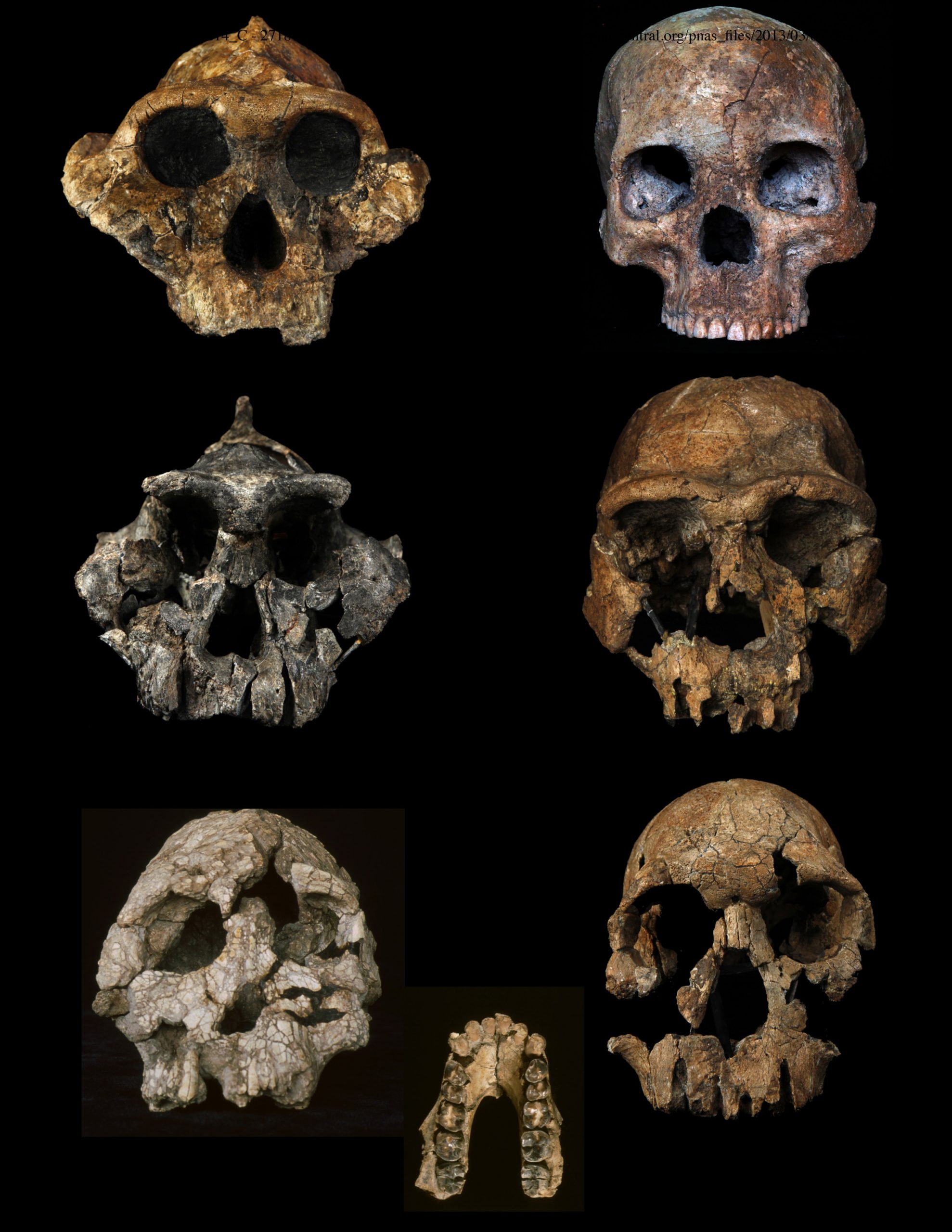 June 3, 2013 – Most apes eat leaves and fruits from trees and shrubs. New studies spearheaded by the University of Utah show that human ancestors expanded their menu 3.5 million years ago, adding tropical grasses and sedges to an ape-like diet and setting the stage for our modern diet of grains, grasses, and meat and dairy from grazing animals.

In four new studies of carbon isotopes in fossilized tooth enamel from scores of human ancestors and baboons in Africa from 4 million to 10,000 years ago, a team of two dozen researchers found a surprise increase in the consumption of grasses and sedges – plants that resemble grasses and rushes but have stems and triangular cross sections.

“At last, we have a look at 4 million years of the dietary evolution of humans and their ancestors,” says University of Utah geochemist Thure Cerling, principal author of two of the four new studies published online June 3 by the journal Proceedings of the National Academy of Sciences. Most funding was from the National Science Foundation.

“For a long time, primates stuck by the old restaurants – leaves and fruits – and by 3.5 million years ago, they started exploring new diet possibilities – tropical grasses and sedges – that grazing animals discovered a long time before, about 10 million years ago” when African savanna began expanding, Cerling says. “Tropical grasses provided a new set of restaurants. We see an increasing reliance on this new resource by human ancestors that most primates still don’t use today.”

Grassy savannas and grassy woodlands in East Africa were widespread by 6 million to 7 million years ago. It is a major question why human ancestors didn’t seriously start exploiting savanna grasses until less than 4 million years ago.

The isotope method cannot distinguish what parts of grasses and sedges human ancestors ate – leaves, stems, seeds and-or underground storage organs such as roots or rhizomes. The method also can’t determine when human ancestors began getting much of their grass by eating grass-eating insects or meat from grazing animals. Direct evidence of human ancestors scavenging meat doesn’t appear until 2.5 million years ago, and definitive evidence of hunting dates to only about 500,000 years ago.

Why Our Ancestor’s Diets Matter

The earliest human ancestor to consume substantial amounts of grassy foods from dry, more open savannas “may signal a major and ecological and adaptive divergence from the last common ancestor we shared with African great apes, which occupy closed, wooded habitats,” writes University of South Florida geologist Jonathan Wynn, chief author of one of the new studies and a former University of Utah master’s student.

“Diet has long been implicated as a driving force in human evolution,” says Matt Sponheimer, a University of Colorado, Boulder anthropologist, former University of Utah postdoctoral fellow and lead author of the fourth study.

He notes that changes in diet have been linked to both larger brain size and the advent of upright walking in human ancestors roughly 4 million years ago. Human brains were larger than those of other primates by the time our genus, Homo, evolved 2 million years ago. (Our species, Homo sapiens, arose 200,000 years ago.)

“If diet has anything to do with the evolution of larger brain size and intelligence, then we are considering a diet that is very different than we were thinking about 15 years ago,” when it was believed human ancestors ate mostly leaves and fruits, Cerling says.

How the Studies Were Performed: You Are What You Eat

The new studies analyze carbon isotope results from 173 teeth from 11 species of hominins. Hominins are humans, their ancestors and extinct relatives that split from the other apes roughly 6 million years ago. Some of the analyses were done in previous research, but the new studies include new carbon-isotope results for 104 teeth from 91 individuals of eight hominin species. Those teeth are in African museums and were studied by two groups working at separate early human sites in East Africa.

Wynn wrote the study about teeth from Ethiopia’s Awash Basin-Hadar area, where research is led by Arizona State University’s William Kimbel. Cerling wrote the study about teeth from the Turkana Basin in Kenya, where the research team is led by Turkana Basin Institute paleoanthropologist Meave Leakey, Cerling and geologist Frank Brown, dean of mines and Earth sciences at the University of Utah. Cerling also wrote a study about baboon diets. Sponheimer wrote a fourth study, summarizing the other three.

The method of determining ancient creatures’ diets from carbon isotope data is less than 20 years old and is based on the idea “you are what you eat,” Sponheimer says.

Tiny amounts of tooth enamel were drilled from already broken fossil teeth of museum specimens of human ancestors and relatives. The powder was placed in a mass spectrometer to learn ratios of carbon isotopes incorporated into tooth enamel via diet.

The ratios of rare carbon-13 to common carbon-12 reveal whether an animal ate plants that used so-called C3, C4 or CAM photosynthesis to convert sunlight to energy. Animals eating C4 and CAM plants have enriched amounts of carbon-13.

C3 plants include trees, bushes and shrubs, and their leaves and fruits; most vegetables; cool-season grasses and grains such as timothy, alfalfa, wheat, oats, barley and rice; soybeans; non-grassy herbs and forbs.

C4 plants are warm-season or tropical grasses and sedges and their seeds, leaves or storage organs like roots and tubers. Well-known sedges include water chestnut, papyrus and sawgrass. C4 plants are common in African savannas and deserts.  C4 grasses include Bermuda grass and sorghum. C4 grains include corn and millet.

CAM plants include tropical succulent plants such as cactus, salt bush and agave.

Today, North Americans eat about half C3 plants, including vegetables, fruits and grains such as wheat, oats, rye and barley, and about half C4, which largely comes from corn, sorghum and meat animals fed on C4 grasses and grains, Cerling says.

The highest human C3 diets today are found in northern Europe, where only C3 cool-season grasses grow, so meat animals there graze them, not C4 tropical grasses. The highest C4 diets likely are in Central America because of the heavily corn-based diet.

If early humans ate grass-eating insects or large grazing animals like zebras, wildebeest and buffalo, it also would appear they ate C4 grasses.  If they ate fish that ate algae, it would give a false appearance of grass-eating because of the way algae takes up carbonate from water, Cerling says. If they ate small antelope and rhinos that browsed on C3 leaves, it would appear they ate C3 trees-shrubs. Small mammals such as hyrax, rabbits and rodents would have added C3 and C4 signals to the teeth of human ancestors.

The Findings: A Dietary History of Human Ancestors and Relatives

— About 4.2 million to 4 million years ago on the Kenyan side of the Turkana Basin, one of Cerling’s new studies shows that human ancestor Australopithecus anamensis ate at least 90 percent leaves and fruits – the same diet as modern chimps.

— By 3.4 million years ago in northeast Ethiopia’s Awash Basin, according to Wynn’s study, Australopithecus afarensis was eating significant amounts of C4 grasses and sedges: 22 percent on average, but with a wide range among individuals of anywhere from 0 percent to 69 percent grasses and sedges. The species also ate some succulent plants. Wynn says that switch “documents a transformational stage in our ecological history.” Many scientists previously believed A. afarensis had an ape-like C3 diet. It remains a mystery why A. afarensis expanded its menu to C4 grasses when its likely ancestor, A. anamensis, did not, although both inhabited savanna habitats, Wynn writes.

— Also by 3.4 million years ago in Turkana, human relative Kenyanthropus platyops had switched to a highly varied diet of both C3 trees and shrubs and C4 grasses and sedges. The average was 40 percent grasses and sedges, but individuals varied widely, eating anywhere from 5 percent to 65 percent, Cerling says.

— About 2.7 million to 2.1 million years ago in southern Africa, hominins Australopithecus africanus and Paranthropus robustus ate tree and shrub foods, but also ate grasses and sedges and perhaps grazing animals. A africanus averaged 50 percent C4 grass-sedge-based foods, but individuals ranged from none to 80 percent. P. robustus averaged 30 percent grasses-sedges, but ranged from 20 percent to 50 percent.

— By 2 million to 1.7 million years ago in Turkana, early humans, Homo, ate a 35 percent grass-and-sedge diet – some possibly from meat of grazing animals – while another hominin, Paranthropus boisei, was eating 75 percent grass – more than any hominin, according to a 2011 study by Cerling. Paranthropus likely was vegetarian. Homo had a mixed diet that likely included meat or insects that had eaten grasses. Wynn says a drier climate may have made Homo and Paranthropus more reliant on C4 grasses.

— By 1.4 million years ago in Turkana, Homo had increased the proportion of grass-based food to 55 percent.

— Some 10,000 years ago in Turkana, Homo sapiens’ teeth reveal a diet split 50-50 between C3 trees and shrubs and C4 plants and likely meat – almost identical to the ratio in modern North Americans, Cerling says.

Humans: The Only Surviving Primates with a C4 Grass Diet

Cerling’s second new study shows that while human ancestors ate more grasses and other apes stuck with trees and shrubs, two extinct Kenyan baboons represent the only primate genus that ate primarily grasses and perhaps sedges throughout its history.

Titles, Authors and Funding for the Four Studies

(2)   “Diet of Australopithecus afarensis from the Pliocene Hadar Formation, Ethiopia.”