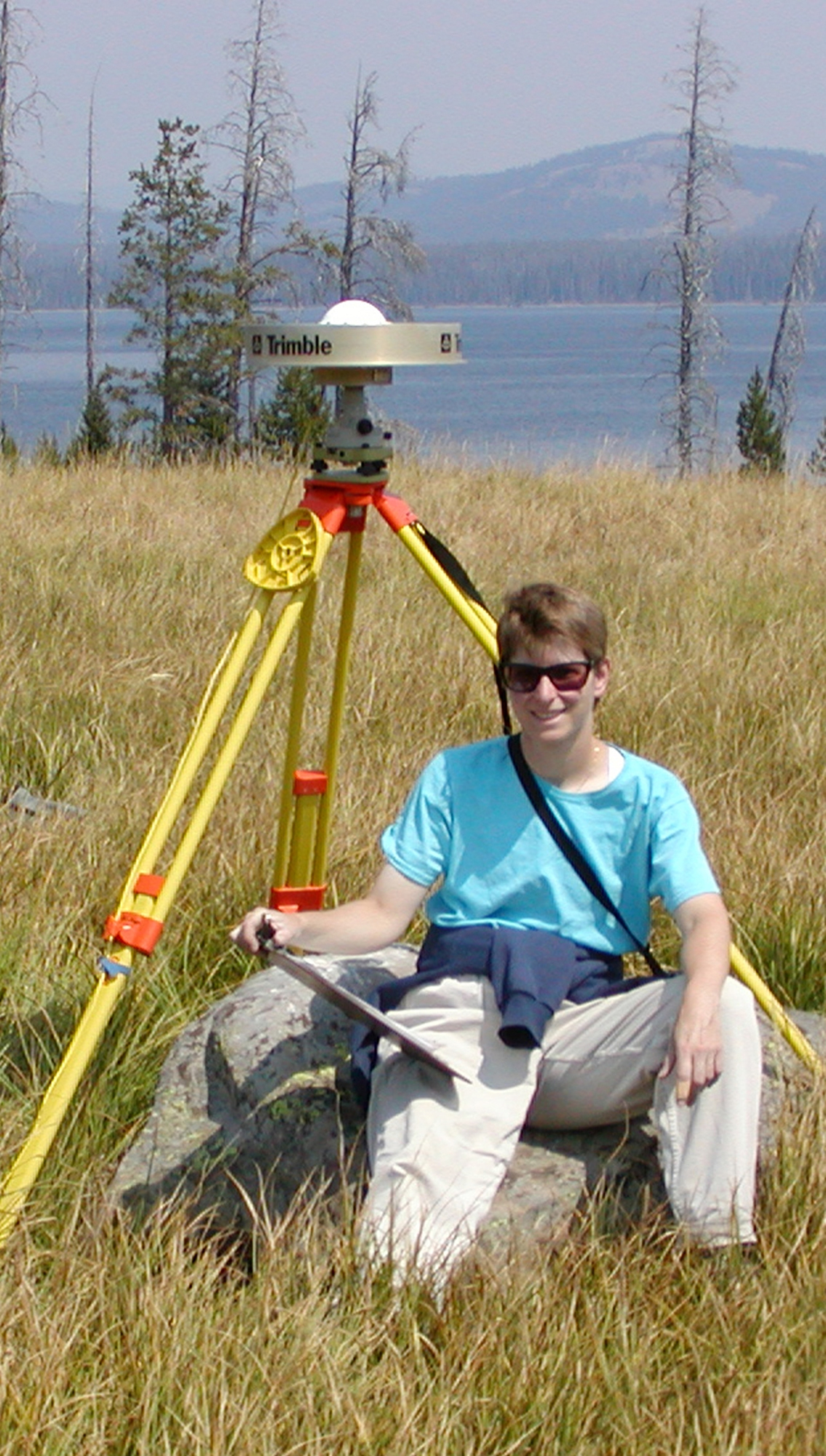 March 1, 2007 — A 17-year University of Utah study of ground movements shows that the power of the huge volcanic hotspot beneath Yellowstone National Park is much greater than previously thought during times when the giant volcano is slumbering.

The $2.3 million study, which used Global Positioning System (GPS) satellites to measure horizontal and vertical motions of Earth’s crust from 1987 to 2004, found that the gigantic underground plume of molten rock known as the Yellowstone hotspot exerts itself forcefully even when it isn’t triggering eruptions and earthquakes:

“The Yellowstone hotspot has had a much bigger effect over a larger area with more energy than ever expected,” says University of Utah geophysics Professor Robert B. Smith, who led the study, which was scheduled for publication Friday, March 2, 2007, in the Journal of Geophysical Research – Solid Earth.

“We’re seeing large-scale deformation of the Earth’s crust in the western United States because of the effects of the Yellowstone hotspot,” says Christine Puskas, a University of Utah geophysics doctoral student and the study’s first author.

The new study is based on measurements made from 1987 until 2004. The measurements included 17 one- to three-month-long “campaigns,” during which portable GPS receivers were placed for two to 10 days each at 90 to 140 benchmarks in the Yellowstone-Teton-eastern Snake River Plain region of Wyoming, Montana and Idaho. More data came from 15 permanent GPS receiver sites installed during 1996-2003.

GPS allows precise surveying of ground movements because two dozen Navstar GPS satellites orbiting Earth broadcast time signals. GPS receivers on the ground record the signals, making it possible to triangulate each receiver’s location to within a few tenths of an inch horizontally and vertically.

The study summarizes the movements of the floor of the 45-by-30-mile Yellowstone caldera – a gigantic volcanic crater formed by a catastrophic eruption 642,000 years ago that spread volcanic ash over half of North America and was 1,000 times bigger than the 1980 eruption of Mount St. Helens in Washington state. Other huge Yellowstone eruptions happened 1.3 million and 2 million years ago, with 30 much smaller but still large eruptions between and since the three cataclysmic blasts.

Due to underground movement of molten rock and hot water, calderas often huff upward and puff downward for tens of thousands of years without catastrophic eruptions.

Earlier research found that a flattened chamber of partly molten rock extends from about 5 miles beneath the Yellowstone caldera down to a depth of at least 10 miles, heated by the much larger, underlying hotspot. The 50-mile-wide hotspot plume of molten rock originates at least 410 miles underground in Earth’s mantle and rises to 75 miles below the caldera, where it hits cooler rock and spreads out to a width of 300 miles.

Smith and Puskas believe the caldera sank when hot water, steam and gases migrated northwest out of the caldera and to the Norris area, making that area rise.

While not part of the new published study, Smith reported at an American Geophysical Union meeting last December that 2004-2006 GPS measurements show the northwest caldera area sank by 3.2 inches, but the central caldera floor rose faster than ever recorded: about 6.7 inches since mid-2004.

“The rate is unprecedented, at least in terms of what scientists have been able to observe in Yellowstone,” Smith says. “We think it’s a combination of magma [molten rock] being intruded under the caldera and hot water released from the magma being pressurized because it’s trapped. I don’t believe this is evidence for an impending volcanic eruption. But it would be prudent to keep monitoring the volcano.”

Puskas adds: “This episode may represent a period like those observed at other large volcanic systems such as Long Valley caldera, California, where episodes of unrest have lasted one to four years, with uplift rates as high as 4 inches a year.”

The fact some GPS receivers now are permanently installed in Yellowstone and provide data daily made researchers realize that ups-and-downs of the caldera occur not just in decades or years, but in months, reflecting underground movements of molten rock and hot water that “also happen over months,” Puskas says.

The Yellowstone hotspot made overlying region bulge upward by one-third mile during the past 2 million years, lifting the Yellowstone Plateau to 8,000 feet elevation.

Smith and Puskas say 1987-2004 GPS measurements show the southwest part of the Yellowstone Plateau is slowly sliding downhill to the southwest at about one-sixth inch per year. That may explain the study’s biggest surprise: ground along the Teton fault moves opposite the expected direction.

The fault runs 40 miles north-south along the eastern base of the Teton Range. It is a “normal” fault, which means that during large quakes, the mountains rise upward and move westward, while the valley of Jackson Hole – just east of the mountains – drops downward and moves eastward. That is because the Teton region is part of the Basin and Range Province of the West, where Earth’s crust is pulled apart east-west between the Sierra Nevada in California and the Rocky Mountains in Utah, Wyoming and Montana.

The vertical movement totals about 3 to 6 feet during a single magnitude-7 quake. Previous evidence indicates there were thousands of magnitude-7 to 7.5 quakes during the past 13 million years, lifting the tallest Teton peaks to altitudes of more than 13,000 feet – almost 7,000 feet above Jackson Hole. Such a quake today would be a major disaster for Jackson, Wyo., and nearby towns.

Yet 17 years of GPS measurements show “the textbook model for a normal fault is not what’s happening at the Teton fault,” Smith says. “The mountains are going down relative to the valley going up. That’s a total surprise.”

The results – Jackson Hole moved west one-quarter inch and upward 1.7 inches from 1987 to 2004 – mean the Teton Range and Jackson Hole valley are being squeezed together rather than stretched apart, as was expected.

Smith believes the bulging Yellowstone hotspot, located north of the Tetons, may be “pushing Jackson Hole into the Teton Range.” This unexpected pressure may explain why there have been no magnitude-7 quakes on the fault since the last one about 4,800 years ago, yet also may allow pressure to build for the next disastrous quake.

“The question is how do you store the stress that is leading to the next big earthquake?” Smith says. “It might include episodes of compression and stretching, and eventually the dominant Basin and Range stretching prevails” to trigger a big quake.

During the new study, Puskas converted GPS-measured ground movements and records of historic earthquake magnitudes into a quantity known as a “moment,” which measures the energy expended to deform the landscape. That allowed her to compare total ground deformation measured by GPS with ground deformation caused by quakes.

She found the ground-moving energy of Yellowstone’s frequent, mostly small quakes was overpowered 10-to-1 by the energy generated from other ground-moving forces. Those include the Yellowstone hotspot’s bulging uplift of the landscape, smaller volcanic ups and downs within the caldera, relaxation of the ground after quakes, and Basin-and-Range stretching of Earth’s crust that ultimately will generate future quakes.

Smith says the fact non-seismic forces to overwhelm quake energies by 10-to-1 “means there is much more energy related to active volcanic processes of uplift and extension of the Earth’s surface,” he says.

An example: The southwestern Yellowstone Plateau is moving southwest at one-sixth inch per year, twice as fast as the next block of land to the southwest: the eastern Snake River Plain. Land from Island Park, Idaho, southwest to Idaho Falls is being squeezed by the collision. Smith says that represents a lot of energy in a small area because the entire 600-mile-wide Basin and Range Province between the Sierra and the Rockies is stretching apart only three times faster, or about a half inch per year.