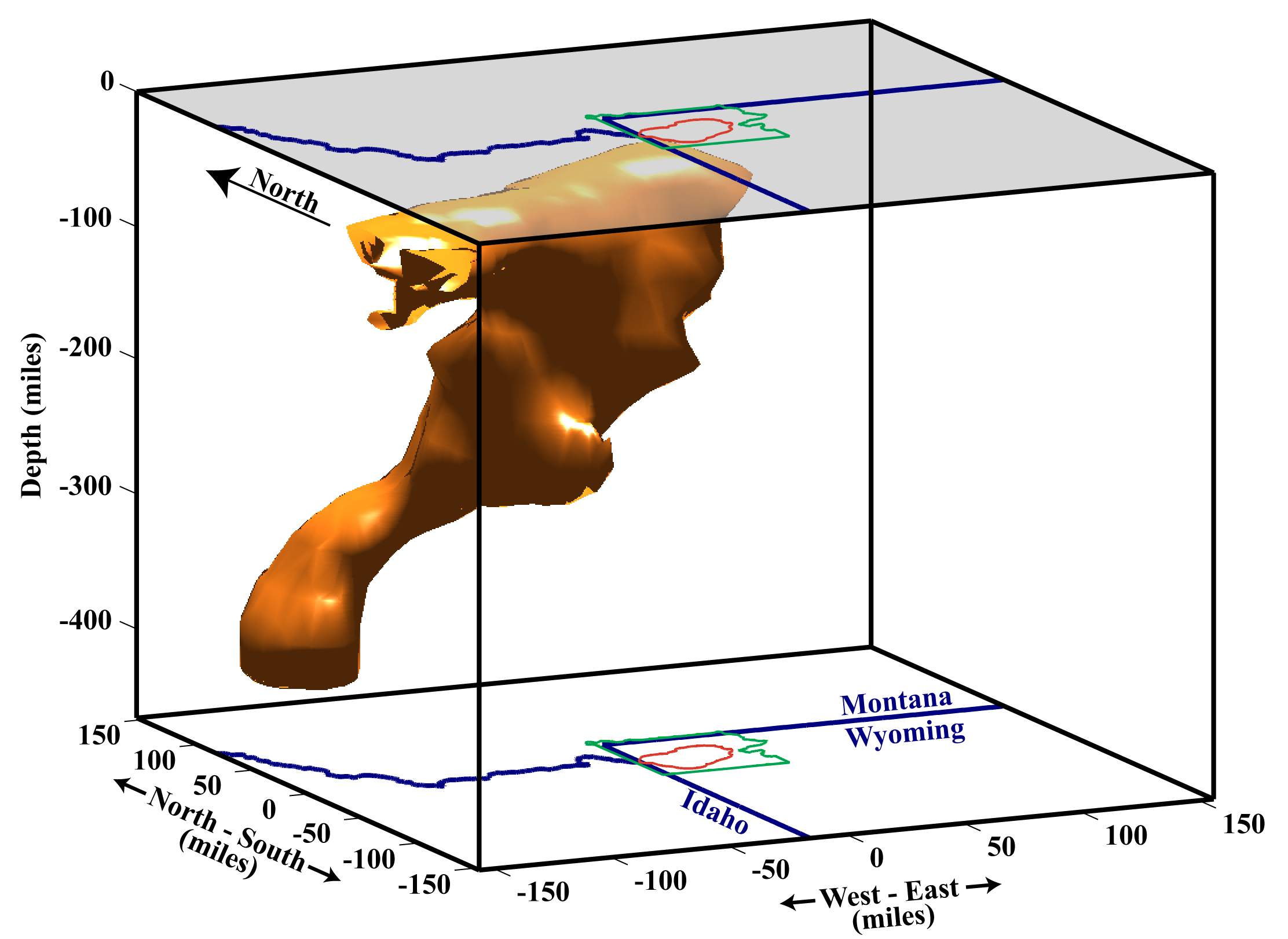 Dec. 14, 2009 – The most detailed seismic images yet published of the plumbing that feeds the Yellowstone supervolcano shows a plume of hot and molten rock rising at an angle from the northwest at a depth of at least 410 miles, contradicting claims that there is no deep plume, only shallow hot rock moving like slowly boiling soup.

A related University of Utah study used gravity measurements to indicate the banana-shaped magma chamber of hot and molten rock a few miles beneath Yellowstone is 20 percent larger than previously believed, so a future cataclysmic eruption could be even larger than thought.

Those are key findings in four National Science Foundation-funded studies in the latest issue of the Journal of Volcanology and Geothermal Research. The studies were led by Robert B. Smith, research professor and professor emeritus of geophysics at the University of Utah and coordinating scientist for the Yellowstone Volcano Observatory.

“We have a clear image, using seismic waves from earthquakes, showing a mantle plume that extends from beneath Yellowstone,” Smith says.

The plume angles downward 150 miles to the west-northwest of Yellowstone and reaches a depth of at least 410 miles, Smith says. The study estimates the plume is mostly hot rock, with 1 percent to 2 percent molten rock in sponge-like voids within the hot rock.

Some researchers have doubted the existence of a mantle plume feeding Yellowstone, arguing instead that the area’s volcanic and hydrothermal features are fed by convection – the boiling-like rising of hot rock and sinking of cooler rock – from relatively shallow depths of only 185 miles to 250 miles.

The Hotspot: A Deep Plume, Blobs and Shallow Magma

Some 17 million years ago, the Yellowstone hotspot was located beneath the Oregon-Idaho-Nevada border region, feeding a plume of hot and molten rock that produced “caldera” eruptions – the biggest kind of volcanic eruption on Earth.

As North America slid southwest over the hotspot, the plume generated more than 140 huge eruptions that produced a chain of giant craters – calderas – extending from the Oregon-Idaho-Nevada border northeast to the current site of Yellowstone National Park, where huge caldera eruptions happened 2.05 million, 1.3 million and 642,000 years ago.

These eruptions were 2,500, 280 and 1,000 times bigger, respectively, than the 1980 eruption of Mount St. Helens. The eruptions covered as much as half the continental United States with inches to feet of volcanic ash. The Yellowstone caldera, 40 miles by 25 miles, is the remnant of that last giant eruption.

The new study reinforces the view that the hot and partly molten rock feeding volcanic and geothermal activity at Yellowstone isn’t vertical, but has three components:

“This conduit is not one tube of constant thickness,” says Smith. “It varies in width at various depths, and we call those things blobs.”

Researchers previously believed the magma chamber measured roughly 6 to 15 miles from southeast to northwest, and 20 or 25 miles from southwest to northeast, but new measurements indicate the reservoir extends at least another 13 miles outside the caldera’s northeast boundary, Smith says.

He says the gravity and other data show the magma body “is an elongated structure that looks like a banana with the ends up. It is a lot larger than we thought – I would say about 20 percent [by volume]. This would argue there might be a larger magma source available for a future eruption.”

Images of the magma reservoir were made based on the strength of Earth’s gravity at various points in Yellowstone. Hot and molten rock is less dense than cold rock, so the tug of gravity is measurably lower above magma reservoirs.

The Yellowstone caldera, like other calderas on Earth, huffs upward and puffs downward repeatedly over the ages, usually without erupting. Since 2004, the caldera floor has risen 3 inches per year, suggesting recharge of the magma body beneath it.

How to View a Plume

Seismic imaging uses earthquake waves that travel through the Earth and are recorded by seismometers. Waves travel more slowly through hotter rock and more quickly in cooler rock. Just as X-rays are combined to make CT-scan images of features in the human body, seismic wave data are melded to produce images of Earth’s interior.

The study, the Yellowstone Geodynamics Project, was conducted during 1999-2005. It used an average of 160 temporary and permanent seismic stations – and as many as 200 – to detect waves from some 800 earthquakes, with the stations spaced 10 miles to 22 miles apart – closer than other networks and better able to “see” underground. Some 160 Global Positioning System stations measured crustal movements.

By integrating seismic and GPS data, “it’s like a lens that made the upper 125 miles much clearer and allowed us to see deeper, down to 410 miles,” Smith says.

The study also shows warm rock – not as hot as the plume – stretching from Yellowstone southwest under the Snake River Plain, at depths of 20 miles to 60 miles. The rock is still warm from eruptions before the hotspot reached Yellowstone.

A Plume Blowing in the 2-inch-per-year Mantle Wind

Seismic imaging shows a “slow” zone from the top of the plume, which is 50 miles deep, straight down to about 155 miles, but then as you travel down the plume, it tilts to the northwest as it dives to a depth of 410 miles, says Smith.

That is the base of the global transition zone – from 250 miles to 410 miles deep – that is the boundary between the upper and lower mantle – the layers below Earth’s crust.

At that depth, the plume is about 410 miles beneath the town of Wisdom, Mont., which is 150 miles west-northwest of Yellowstone, says Smith.

He says “it wouldn’t surprise me” if the plume extends even deeper, perhaps originating from the core-mantle boundary some 1,800 miles deep.

Why doesn’t the plume rise straight upward? “This plume material wants to come up vertically, it wants to buoyantly rise,” says Smith. “But it gets caught in the ‘wind’ of the upper mantle flow, like smoke rising in a breeze.” Except in this case, the “breeze” of slowly flowing upper mantle rock is moving horizontally 2 inches per year.

While the crustal plate moves southwest, the warm, underlying mantle slowly boils due to convection, with warm areas moving upward and cooler areas downward. Northwest of Yellowstone, this convection is such that the plume is “blown” east-southeast by mantle convection, so it angles upward toward Yellowstone.

Scientists have debated for years whether Yellowstone’s volcanism is fed by a plume rising from deep in the Earth or by shallow churning in the upper mantle caused by movements of the overlying crust. Smith says the new study has produced the most detailed image of the Yellowstone plume yet published.

But a preliminary study by other researchers suggests Yellowstone’s plume goes deeper than 410 miles, ballooning below that depth into a wider zone of hot rock that extends at least 620 miles deep.

The notion that a deep plume feeds Yellowstone got more support from a study published this month inicating that the Hawaiian hotspot – which created the Hawaiian Islands – is fed by a plume that extends downward at least 930 miles, tilting southeast.

A Common Source for Yellowstone and the Columbia River Basalts?

Based on how the Yellowstone plume slants now, Smith and colleagues projected on a map where the plume might have originated at depth when the hotspot was erupting at the Oregon-Idaho-Nevada border area from 17 million to almost 12 million years ago.

Their conclusion: the Yellowstone hotspot plume might have fed those gigantic lava eruptions, which covered much of eastern Oregon and eastern Washington state.

“I argue it is the common source,” Smith says. “It’s neat stuff and it fits together.”

PDF files of the new studies may be downloaded from: http://www.uusatrg.utah.edu/