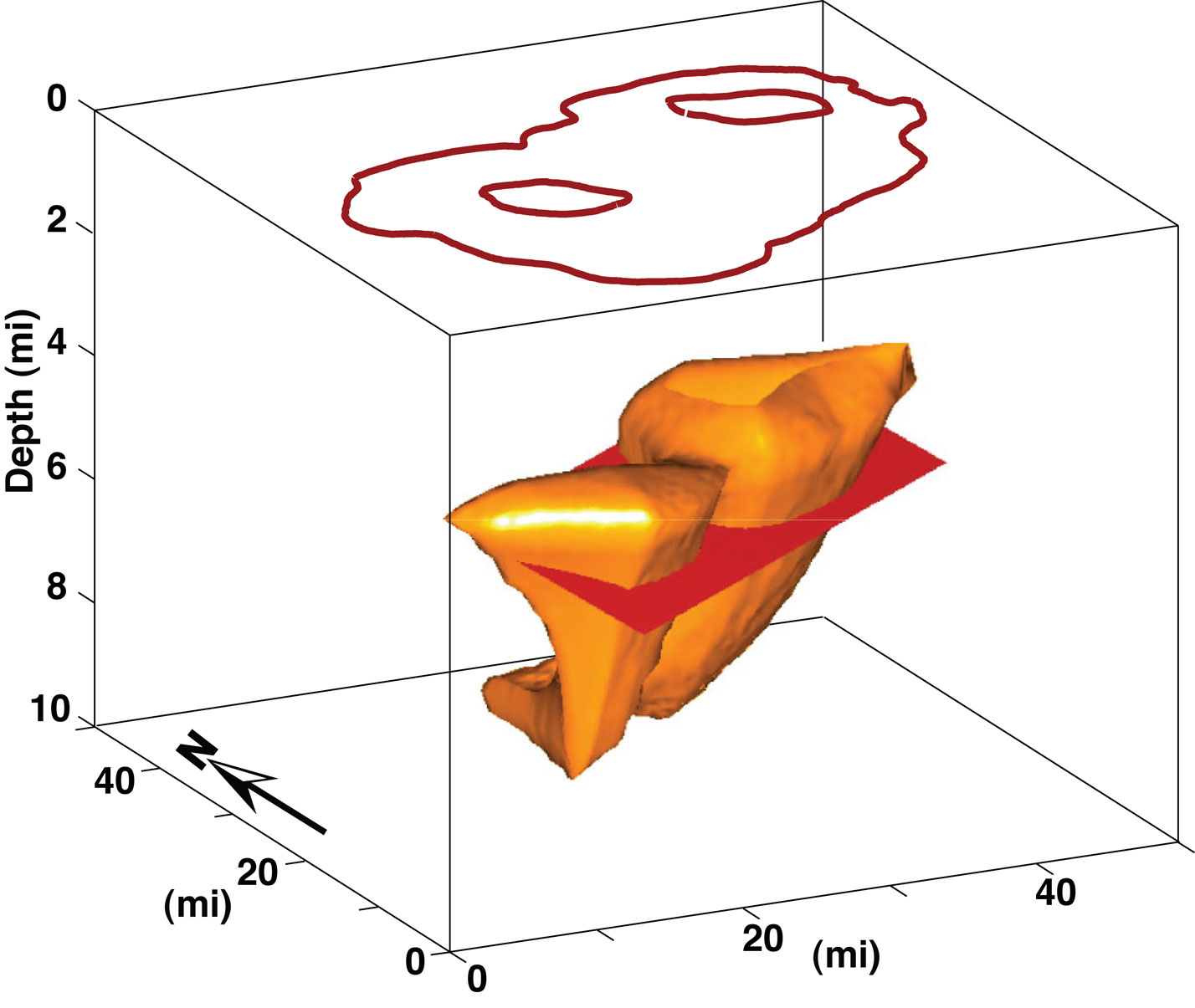 Nov. 8, 2007 – The Yellowstone “supervolcano” rose at a record rate since mid-2004, likely because a Los Angeles-sized, pancake-shaped blob of molten rock was injected 6 miles beneath the slumbering giant, University of Utah scientists report in the journal Science.

“There is no evidence of an imminent volcanic eruption or hydrothermal explosion. That’s the bottom line,” says seismologist Robert B. Smith, lead author of the study and professor of geophysics at the University of Utah. “A lot of calderas [giant volcanic craters] worldwide go up and down over decades without erupting.”

The upward movement of the Yellowstone caldera floor – almost 3 inches (7 centimeters) per year for the past three years – is more than three times greater than ever observed since such measurements began in 1923, says the study in the Nov. 9 issue of Science by Smith, geophysics postdoctoral associate Wu-Lung Chang and colleagues.

“Our best evidence is that the crustal magma chamber is filling with molten rock,” Smith says. “But we have no idea how long this process goes on before there either is an eruption or the inflow of molten rock stops and the caldera deflates again,” he adds.

The magma chamber beneath Yellowstone National Park is a not a chamber of molten rock, but a sponge-like body with molten rock between areas of hot, solid rock.

Chang, the study’s first author, says: “To say if there will be a magma [molten rock] eruption or hydrothermal [hot water] eruption, we need more independent data.”

Calderas such as Yellowstone, California’s Long Valley (site of the Mammoth Lakes ski area) and Italy’s Campi Flegrei (near Naples) huff upward and puff downward repeatedly for decades to tens of thousands of years without catastrophic eruptions.

Smith and Chang conducted the study with University of Utah geophysics doctoral students Jamie M. Farrell and Christine Puskas, and with geophysicist Charles Wicks, of the U.S. Geological Survey in Menlo Park, Calif.

Yellowstone: A Gigantic Volcano Atop a Hotspot

Yellowstone is North America’s largest volcanic field, produced by a “hotspot” – a gigantic plume of hot and molten rock – that begins at least 400 miles beneath Earth’s surface and rises to 30 miles underground, where it widens to about 300 miles across. There, blobs of magma or molten rock occasionally break off from the top of the plume, and rise farther, resupplying the magma chamber beneath the Yellowstone caldera.
Previous research indicates the magma chamber begins about 5 miles beneath Yellowstone and extends down to a depth of at least 10 miles. Its heat powers Yellowstone’s geysers and hot springs – the world’s largest hydrothermal field.

As Earth’s crust moved southwest over the Yellowstone hotspot during the past 16.5 million years, it produced more than 140 cataclysmic explosions known as caldera eruptions, the largest but rarest volcanic eruptions known. Remnants of ancient calderas reveal the eruptions began at the Oregon-Idaho-Nevada border some 16.5 million years ago, then moved progressively northeast across what is now the Snake River Plain.

The hotspot arrived under the Yellowstone area sometime after about 4 million years ago, producing gargantuan eruptions there 2 million, 1.3 million and 642,000 years ago. These eruptions were 2,500, 280 and 1,000 times bigger, respectively, than the 1980 eruption of Mount St. Helens. The eruptions covered as much as half the continental United States with inches to feet of volcanic ash.

The most recent giant eruption created the 40-mile-by-25-mile oval-shaped Yellowstone caldera. The caldera walls have eroded away in many areas – although they remain visible in the northwest portion of the park. Yellowstone Lake sits roughly half inside and half outside the eroded caldera. Many smaller volcanic eruptions occurred at Yellowstone between and since the three big blasts, most recently 70,000 years ago. Smaller steam and hot water explosions have been more frequent and more recent.

Measuring a Volcano Getting Pumped Up

In the new study, the scientists measured uplift of the Yellowstone caldera from July 2004 through the end of 2006 with two techniques:

Twelve Global Positioning System (GPS) ground stations that receive timed signals from satellites, making it possible to measure ground uplift precisely.
The European Space Agency’s Envisat satellite, which bounces radar waves off the Yellowstone caldera’s floor.
The measurements showed that from mid-2004 through 2006, the Yellowstone caldera floor rose as fast as 2.8 inches (7 centimeters) per year – and by a total of 7 inches (18 centimeters) during the 30-month period, Chang says.

“The uplift is still going on today but at a little slower rate,” says Smith, adding there is no way to know when it will stop.

Smith says the fastest rate of uplift previously observed at Yellowstone was about 0.8 inch (2 centimeters) per year between 1976 and 1985.

He says that Yellowstone’s recent upward motion may seem small, but is twice as fast as the average rate of horizontal movement along California’s San Andreas fault.

The current uplift is faster than ever observed at Yellowstone, but may not be the fastest ever, since humans weren’t around for its three supervolcano eruptions.

Chang, Smith and colleagues conducted computer simulations to determine what changes in shape of the underground magma chamber best explained the recent uplift.

The simulations or “modeling” suggested the molten rock injected since mid-2004 is a nearly horizontal slab – known to geologists as a sill – that rests about 6 miles (10 kilometers) beneath Yellowstone National Park. The slab sits within and near the top of the pre-existing magma chamber, which resembles two anvil-shaped blobs expanding upward from a common base.

Smith describes the slab’s computer-simulated shape as “kind of like a mattress” about 38 miles long and 12 miles wide, but only tens or hundreds of yards thick.

In reality, he believes the slab resembles a large, spongy pancake formed as molten rock injected from below spread out near the top of the magma chamber.

The pancake of molten rock has an area of about 463 square miles, compared with 469 square miles of land for the City of Los Angeles.

Smith and colleagues believe steam and hot water contribute to uplift of the Yellowstone caldera, particularly during some previous episodes, but evidence indicates molten rock is responsible for most of the current uplift.

Chang says that when rising molten rock reaches the top of the magma chamber, it starts to crystallize and solidify, releasing hot water and gases, pressuring the magma chamber. But gases and steam compress more easily than molten rock, so much greater volumes would be required to explain the volcano’s inflation, the researchers say.

Also, large volumes of steam and hot water usually are no deeper than 2 miles, so they are unlikely to be inflating the magma chamber 6 miles underground, Smith adds.

Ups and Downs at Yellowstone

GPS data showed the Yellowstone caldera floor sank 4.4 inches during 1987-1995. From 1995 to 2000, the caldera rose again, but the uplift was greatest – 3 inches – at Norris Geyser Basin, just outside the caldera’s northwest rim.

During 2000-2003, the northwest area rose another 1.4 inches, but the caldera floor itself sank about 1.1 inches. The trend continued during the first half of 2004. Then, in July 2004, the caldera floor began its rapid rate of uplift, followed three months later by sinking of the Norris area that continued until mid-2006.

Smith believes that uplift of the middle of the caldera decreased pressure within rocks along the edges of the giant crater, “so it allowed fluids to flow into the area of increased porosity.” That, in turn, triggered small earthquakes along the edge of the “pancake” of magma. The amount of hot water flowing out of the deflated Norris area is much smaller than the volume of magma injected beneath the caldera, Smith says.

The research was funded by the National Science Foundation, the U.S. Geological Survey and the Brinson Foundation.