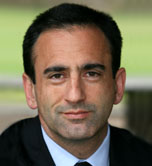 Nov. 26, 2007 — The University of Utah 2007-2008 Middle East Lecture Series kicks off this November with a lecture from Philip Gordon, senior fellow for U.S. foreign policy at the Brookings Institution.

Gordon will present a lecture from his new book Winning the Right War: The Path to Security for America and the World. The event will take place Thursday, Nov. 29 at 4 p.m. in the Hinckley Caucus Room, Orson Spencer Hall 255, on the University of Utah campus. The Middle East Lecture Series are free and open to the public.

Senior fellow for U.S. Foreign Policy at the Brookings Institution in Washington D.C., Gordon also served on the National Security Council under President Clinton and held teaching and research positions with the International Institute for Strategic Studies, Johns Hopkins University School of Advanced and International Studies and INSTEAD.

“Gordon embodies depth and decency with ease,” notes Ibrahim Karawan, director of the Middle East Center. Having worked with Gordon at the International Institute for Strategic Studies in London, Karawan recalls Gordon’s strong command over politics and policy-making.

“His ability to capture the complex dimensions of European and Middle Eastern politics is outstanding. His last visit to the University of Utah remains memorable by many of our students and faculty,” says Karawan.

Gordon earned his Ph.D. and M.A. from Johns Hopkins University and has authored and coauthored numerous publications, including: Crescent of Crisis: U.S. European Strategy for the Greater Middle East (Brookings, 2006); and Allies at War: America, Europe and the Crisis Over Iraq (McGraw-Hill, 2004). His most recent articles include “Can the War on Terror be Won?” (Foreign Affairs, Nov/Dec 2007) and “The Hyperpresident” (American Interest Nov/Dec 2007).

Gordon is a member of the Council on Foreign Relations, the Board of the U.S. Committee on NATO and the International Institute for Strategic Studies.

The Middle East Lecture Series is organized by the Middle East Center at the University of Utah, in collaboration with the office of the president, the office of the senior vice president for academic affairs, the vice president for university relations, the College of the Humanities, the College of Social and Behavioral Sciences, the department of political science and the Hinckley Institute of Politics.

For more information on upcoming lectures or on the Middle East Center at the University of Utah, contact Shari Lindsey, 801-581-6181 or shari.lindsey@hum.utah.edu.