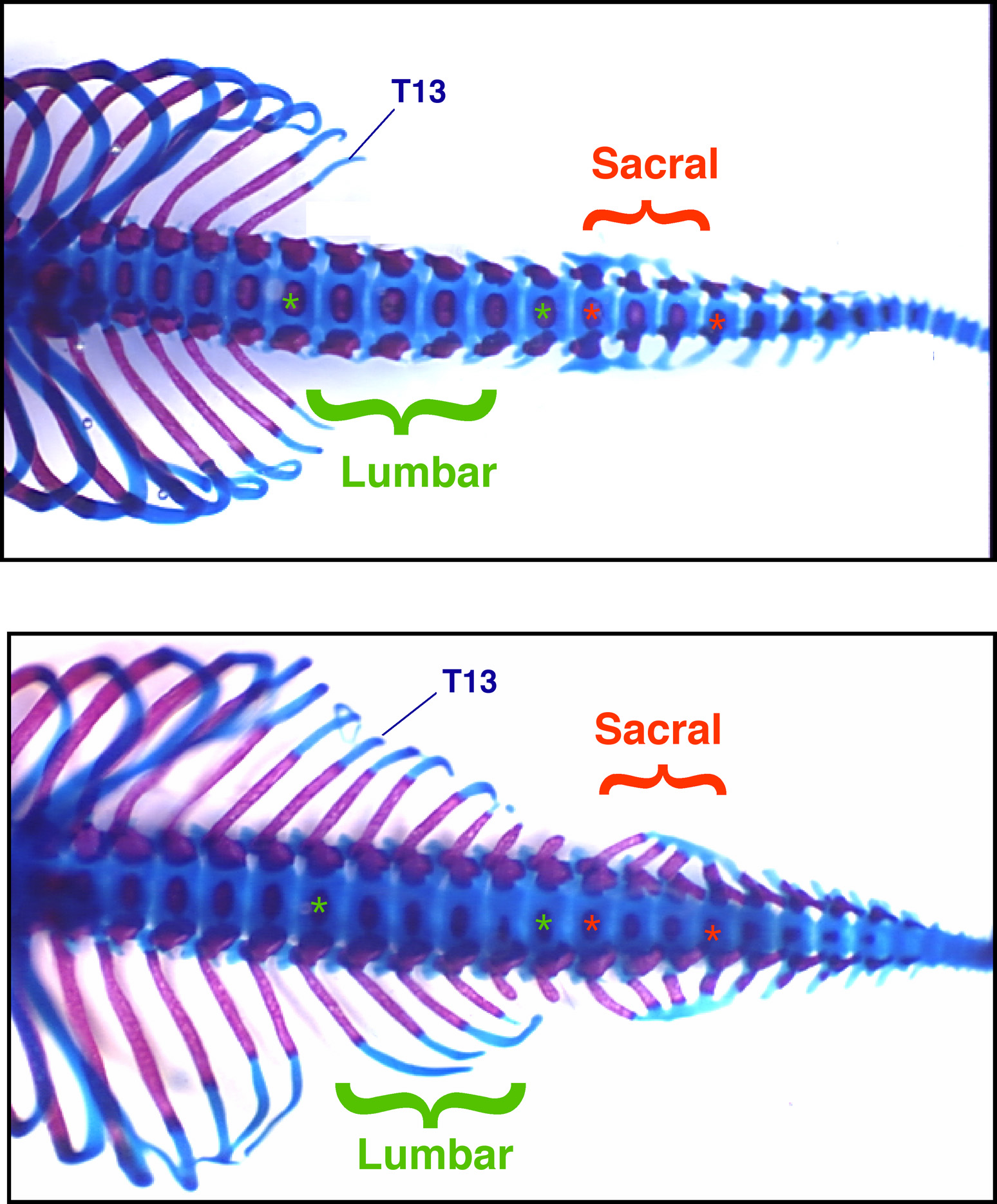 July 17, 2003 — University of Utah researchers have identified genes that help explain why mice, people and other mammals evolved with modern rib cages instead of having snake-like ribs that extend from the neck to the tailbone.

By disabling the genes, geneticist Mario Capecchi and postdoctoral fellow Deneen Wellik bred mice with extra ribs that start below the chest’s normal rib cage and continue down through the lower back and to the tail.

The new study draws a more complete scientific picture of how 16 key genes – all of which evolved from a single gene in ancient spineless creatures – help direct development of limbs and the lower spine in vertebrates, which are animals with spines.

“What we have shown is that a particular ancestral set of genes is used to form the limbs as well as your lower body skeleton [lower spine] below the ribs,” says Capecchi, professor and co-chairman of human genetics at the University of Utah and an investigator with the Howard Hughes Medical Institute.

During the evolution of vertebrate animals, ancestral genes gained new uses, including suppressing development of extra ribs, which allowed the animals to move with greater flexibility to hunt for prey or escape predators.

“Initially, all of your [early vertebrate] skeleton was protective and holding your body rigid, making it more difficult for somebody to chomp down on you and eat you,” Capecchi says. “Later on, it became important to be fast and agile,” for both predators and prey.

Wellik says genes that suppressed ribs and allowed development of sacral vertebrae – those where the pelvis attaches to the spine – made it possible for mammal reproduction to evolve. Mammals deliver newborns through the pelvis.

A brief history of Hox genes

Capecchi is widely known among geneticists for developing “gene targeting” in mice. The method allows scientists to “knock out” or disable a gene of interest. Researchers then observe what goes wrong in the mouse, revealing the gene’s normal function.

In the new study, Wellik and Capecchi studied “homeobox” or “Hox” genes, which orchestrate the activity of other genes to make an embryo develop into an adult.

Until roughly 500 million years ago, only spineless creatures inhabited Earth. They had up to 13 Hox genes to direct development of their embryos. The first fish and other vertebrate animals evolved from a common invertebrate ancestor. Part or all the genetic blueprint of these animals multiplied. When primitive mammals evolved later, they had four sets of 13 Hox genes, or 52 total on four chromosomes.

Many of the Hox genes had (and still have) redundant or overlapping functions. But the proliferation of new Hox genes is thought to have let early vertebrates evolve. Some of the genes mutated and took on new functions, leading to animals with new and innovative body features. Some of the 52 Hox genes were not needed and eventually vanished from the genetic blueprint, so humans, mice and all other mammals now have 13 groups of Hox genes with two to four genes in each group, for 39 total Hox genes.

Because the original 13 Hox genes in invertebrates were quadrupled in mammals, genes in any group of four related Hox genes overlap in what they do, even many acquired new functions as well. So to learn what a group of Hox genes does, all two to four members of each group must be crippled to reveal their normal function.

Capecchi and Wellik studied two groups of Hox genes – Hox10 and Hox11 – and their role in skeletal development in the mouse and, by implication, in humans and other mammals.

Yet some early vertebrates – primitive fish, amphibians and dinosaurs – had ribs growing from vertebrae extending from the neck through the chest and lower back all the way to the tail. Snakes also have ribs along the length of the body, but they evolved more recently from reptiles that had fewer ribs.

So how did mammals evolve lower back, pelvic and tailbone vertebrae without ribs?

“Hox genes have been utilized to modify the basic body plan to give rise to the different vertebrate body plans,” Capecchi says. “One way is to suppress formation of ribs beyond a certain number.”

He and Wellik bred mice with disabled versions of all three Hox10 genes, known as Hoxa10, Hoxc10 and Hoxd10. “When the whole family of Hox10 genes was knocked out, the mice had ribs from the normal ribs all the way to the tail,” says Capecchi.

If not all the Hox10 genes were crippled, the mouse showed some abnormalities, but did not have all the extra ribs. That shows how all the Hox10 genes share the redundant function of preventing ribs from growing from the lumbar and pelvic vertebrae.

When the researchers knocked out the Hox11 genes – Hoxa11, Hoxc11 and Hoxd11 – “no sacral vetebrae develop, and instead you have lumbar vertebrae all the way to the tail,” with no place for the pelvis to attach to the spine, says Capecchi.

While the new study did not examine the question, Capecchi suspects other Hox genes are involved in preventing formation of ribs attached to the cervical vertebrae, or neck bones.

The new study showed the upper leg failed to form properly – with an extremely short femur or thighbone and no kneecap – in mice when all Hox10 genes were knocked out. Wellik and Capecchi also found that when all the Hox11 genes were inactivated, the lower leg was malformed, with a greatly shortened tibia (shinbone) and fibula (calf bone).

Capecchi says the new study adds to the picture of how Hox genes contribute to limb formation in mice and – because the genes are the same in all mammals – in people:
— Upper arm formation appears to be directed by the Hoxa10 and Hoxd10 genes (the new study) and by the Hoxa9 and Hoxd9 gene (previous research by others).
— Forearm development depends on Hoxa11 and Hoxd11 (Capecchi’s earlier work).
— Forepaw or hand formation is guided by Hoxa13 and Hoxd13 (research by others).
— Upper legs are formed under the control of all the Hox10 genes (the new study).
— Lower legs develop under the control of all the Hox11 genes (also the new study).
— The rear paws or feet take shape because of the Hoxa13 and Hoxd13 genes, just as do the forepaws or hands (earlier research elsewhere).

Wellik says the Hox9, Hox10, Hox11, Hox12 and Hox13 genes in vertebrate animals – 16 of the 39 Hox genes found in all mammals – are all related to a single ancestral gene in invertebrates, suggesting they played a crucial role in allowing vertebrate evolution.

Capecchi has won numerous prizes for his role in developing gene targeting, including the National Medal of Science and the Albert Lasker Award for Basic Medical Research in 2001, the 2002-2003 Wolf Prize in Medicine and the 2003 Pezcoller Foundation-American Association for Cancer Research International Award for Cancer Research.