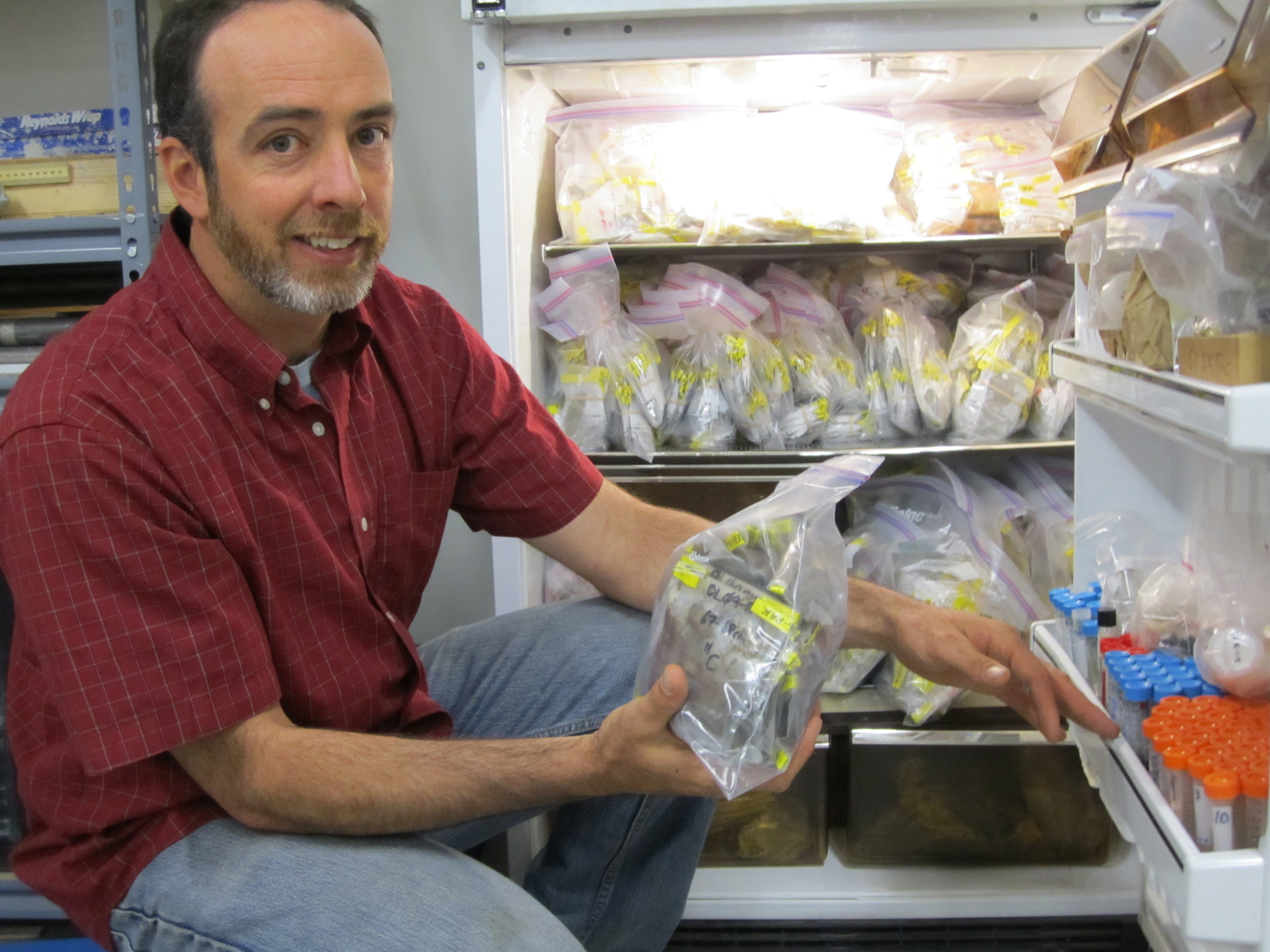 July 30, 2012 – In the years after Columbus’ voyage, burning of New World forests and fields diminished significantly – a phenomenon some have attributed to decimation of native populations by European diseases. But a new University of Utah-led study suggests global cooling resulted in fewer fires because both preceded Columbus in many regions worldwide.

“The drop in fire [after about A.D. 1500] has been linked previously to the population collapse. We’re saying no, there is enough independent evidence that the drop in fire was caused by cooling climate,” says the study’s principal author, Mitchell Power, an assistant professor of geography at the University of Utah.

“The implication is that climate is a large-scale driver of fire. That’s a key finding. Climate is driving fire on global and continental scales,” says Power, who also is curator of the Garrett Herbarium at the Natural History Museum of Utah, which is part of the University of Utah.

The new study analyzed worldwide charcoal samples spanning 2,000 years. It will be published online during August in the journal The Holocene, which is the name of the geological epoch covering roughly the last 11,500 years of Earth’s history. It was funded by the National Science Foundation and the Natural History Museum of Utah.

The study deals with the Little Ice Age, a period when Earth’s climate cooled, causing New York Harbor to freeze over in 1780, among other effects. Estimates of when the Little Ice Age started range from the 1200s to the 1500s. It ended in the early 1800s. Possible causes include some combination of increased dust from volcanic eruptions, decreased solar activity, and changes in circulation of the ocean and atmosphere.

“The decrease in fire on a very large scale – globally and in the Americas – was controlled by this cooling climate, which began prior to the population collapse, and climate alone is sufficient to explain large scale changes in burning,” says Power.

“In a cooler atmosphere, you tend to get reduced convection, so you get reduced thunderstorms and ignition from lightning,” he says. “Cooler climate also tends to maintain high levels of fuel moisture and soil moisture.”

Today, warming climate and drought have been tied to increasing fires in the U.S. West and elsewhere. “In a world where climate is rapidly changing we need to pay more attention to this relationship between climate and fire,” Power says

After Columbus reached the New World in 1492, explorers brought European diseases such as smallpox that “decimated populations in the Americas – 10 million to 100 million dead, with most estimates in the 60 million range,” Power says.

“All these people died abruptly – Mayans, Incas, Aztecs and down in Patagonia – they were all affected,” he adds. “Agriculture was sharply reduced. Landscapes that had been cleared for agriculture started a process of plants growing back and infilling those abandoned fields. In terms of greenhouse gases, when you change from maintained cropland to woodlands, plants take up more carbon dioxide and there is less in the atmosphere. This has been pointed to as one mechanism for causing the Little Ice Age.”

Power agrees population collapse may have led to reduced biomass burning in some local regions of the Americas. But the new study indicates the reduction in fire was actually global and began before Columbus in most areas, suggesting the Little Ice Age triggered most of the reduction in burning – not the other way around, Power says.

“If you look at independent climate records, cooling from the Little Ice Age was happening about 200 years before the population collapse,” or about A.D. 1300, he says.

Power notes there is room for debate because the Little Ice Age varied in time and space, and didn’t affect all parts of the world equally, although most places cooled.

A Record of Fire Left in Charcoal

The study used existing records and-or new samples of charcoal – burnt wood or other biomass – found in sediment cores from lake bottoms and bogs from some 600 sites around the world, about half in the Americas, and dated within the past 2,000 years.

“Whatever was burning, we see a record of that fire in lake sediments, from either aerial transport or erosion” of burned material, Power says.

Power manages the Global Charcoal Database that compiles data from all the existing studies that date charcoal samples and describe where they came from. The new study included 498 existing charcoal records and 93 new samples.

“We have gone back in and calculated the ages of all these charcoal samples,” except for some dated independently in other recent studies, and then used recent radiocarbon dating calibrations to make sure all data are consistent, Power says.

“Greater than 80 percent of biomass burning records show a decline post-1500 in the Americas, he says. The other 20 percent may be from areas that were still fire-prone despite cooling or that simply had burning declines for which there are inadequate charcoal samples, he adds.

— Clumping all the charcoal data in two groups – from the Americas or the Eastern Hemisphere – shows that in the Americas, biomass burning declined between 1500 and 1650 and stayed at a minimum until 1700, the same time as the peak of the Little Ice Age. That period was the lowest level of burning in the past 6,000 years.

— In the Eastern Hemisphere, there was a prominent decline in burning that began about 1400 – well before the population collapse in the Americas. Power says cooling also started about a century earlier in the Eastern Hemisphere than in the Americas – more evidence cooling caused reduced burning. There was no parallel population collapse large enough to explain the reduction in burning, although a small downward blip in burning is noted in Europe around the time of the bubonic plague or Black Death.

— In tropical South America, climate changed around 1350 to 1400. There is debate whether it warmed or cooled. The population collapsed after 1500. Power says neither climate nor population strongly influenced post-Columbian biomass burning in that region, which declined only subtly and not until 1700. It also is possible the population that collapsed didn’t use fire very much in agriculture – something a recent study coauthored by Power found in French Guiana.

— In southern South America, ice-core and tree-ring growth studies show cooling began about 1450, well before an abrupt decline in burning in 1550. That would seem to support the theory that population collapse reduced burning – except that the region had little population, certainly not enough for any decline to trigger a reduction in burning.

— Ice cores from Greenland show cooling started about 1450, and fire started to decline about 1500, according to charcoal for boreal Canada and the western United States. Cooling and reduced burning stopped about 1800. Despite the 50-year lag, Power says that is more evidence tying climate cooling to reduced biomass burning, particularly since the region had relatively few people at the time.