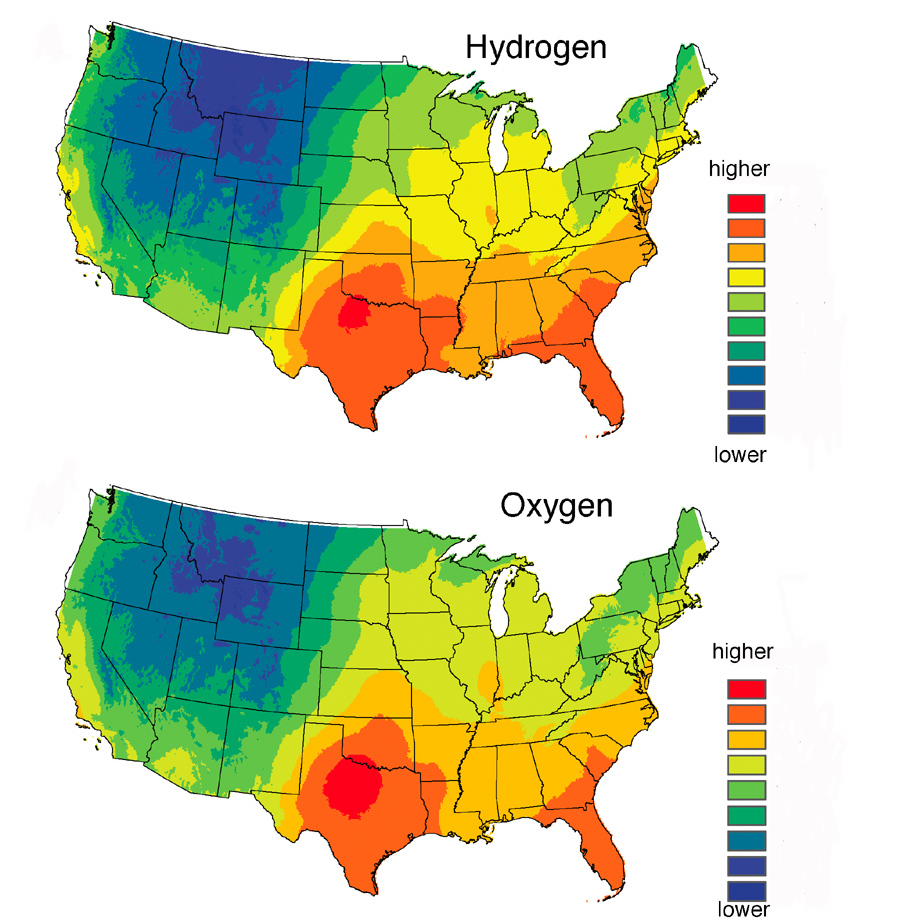 “You are what you eat and drink – and that is recorded in your hair,” says geochemist Thure (pronounced Tur-ee) Cerling, who led the research effort with ecologist Jim Ehleringer.

Their findings are being published online Feb. 25 in the journal Proceedings of the National Academy of Sciences. The new hair analysis method also may prove useful to anthropologists, archaeologists and medical doctors in addition to police.

“We have found significant variations in hydrogen and oxygen isotopes in hair and water that relate to where a person lives in the United States,” Ehleringer says. “Police are already using this to reconstruct the possible origins of unidentified murder victims.”

One such officer is Salt Lake County Sheriff’s Detective Todd Park, who is using the new type of hair analysis in an effort to identify a murdered woman whose remains were found near the Great Salt Lake in October 2000.

“It’s a phenomenal method,” says Park, a member of his department’s cold case homicide unit. “I think it will help the law enforcement community a great deal.”

Isotopes are forms of the same chemical element with different atomic weights. Stable isotopes are those that do not decay radioactively.

Ehleringer is a distinguished professor of biology at the University of Utah, and Cerling is a distinguished professor of geology and geophysics, and of biology. Three years ago, they co-founded IsoForensics, Inc., a company that is using stable isotope analysis of forensic substances to find slight variations in a chemical element’s various isotopes.

Ehleringer previously developed a method now used by the U.S. Drug Enforcement Administration to help learn where cocaine or heroin were produced based on local variations in carbon, nitrogen, oxygen and hydrogen isotopes absorbed into coca and poppy plants from soil and water. He also analyzed hydrogen and oxygen isotopes to help track counterfeit $100 bills, based on the water used to grow the cotton with which the bills were made.

The new technique analyzes stable isotopes of hydrogen (rare hydrogen-2 and common hydrogen-1) and oxygen (rare oxygen-18 and common oxygen-16) incorporated in growing hair from water and food that a person consumes and from air they breathe.

The ratio of oxygen-18 to oxygen-16 in the air we breathe is the same everywhere, and Americans tend to get similar oxygen and hydrogen isotope ratios from food because the U.S. diet is becoming homogenized.

So a single hair can help determine a person’s location during recent weeks to years, depending on the length of the hair sample and thus how much time it took to grow.

The scientists used the method to produce color-coded maps showing how ratios of hydrogen and oxygen isotopes in scalp hair vary in different areas of the United States.

The maps cannot pinpoint a person’s exact locations in the past, but identifies general geographic areas where they stayed and drank local water.

“You can tell the difference between Utah and Texas,” Ehleringer says. But, Cerling adds, “You may not be able to distinguish between Chicago and Kansas City.”

Ehleringer’s wife, Edna, and one of her friends collected samples in southern, central and southwestern states; Cerling’s children – Claire and Dylan – traveled across the nation’s northern tier. They asked barbers, “Can we have some of that trash from your floor or your trash can?” Jim Ehleringer says. “They came back with cardboard boxes filled with vials of water and envelopes of discarded hair.”

Why Isotope Concentrations Vary with Geography

Why do isotopes in water – made of hydrogen and oxygen – vary with geography?

As clouds move off the ocean and onto the continent, rain water with oxygen-18 and hydrogen-2 tends to fall first because it is heavier. That should make ratios of oxygen-18 to oxygen-16 and hydrogen-2 to hydrogen-1 higher near the coast and lower farther inland.

But other factors also are important, including cloud temperatures, the season during which rain falls and the amount of water that evaporates from soil and plants.

These factors explain why oxygen-18 and hydrogen-2 levels in drinking water decrease rapidly moving inland from the West Coast (where winter storms are cold) and remain high inland from the Gulf and southern Atlantic coasts (where clouds are warmer).

Isotope concentrations vary seasonally in rain and snow, but drinking water in reservoirs or ground water represents a region’s average precipitation over time and space.

Drinking water from any area has an isotope signature that is incorporated into growing hair. That signature is not complicated by other beverages because “a significant fraction of beer, soft drinks and milk is local in its origin,” Ehleringer says.

The study found that areas where drinking water and hair have the lowest concentrations of hydrogen-2 and oxygen-18 include northern and western Montana, north-central Idaho and northwest Wyoming. The heavy isotopes drop out of clouds before they reach those inland areas because of both the cold and the distance from the Pacific Ocean.

Regions with the highest amounts of hydrogen-2 and oxygen-18 in drinking water and hair were southern Oklahoma, north-central Texas, Florida, south Georgia and southern South Carolina. Heavy isotope levels are high there because most water falls as summer rain and some evaporates from lakes, leaving more of the heavier isotopes behind in drinking water.

A New Tool for Police, Coroners and Scientists

The method already is being used by police to learn where unidentified murder victims might have been prior to their deaths.

On Oct. 8, 2000, hunters found the remains of a female murder victim near Interstate-80 along the south end of the Great Salt Lake west of Salt Lake City. Detectives recovered 26 bones, some hair, a T-shirt and a necklace.

A few months later, they created a facial reconstruction and publicized it nationally, but the woman’s identity remains unknown. She was about 5 feet tall, age 17 to 20.

After hearing of Ehleringer’s research, Park contacted the scientist and arranged for the isotope analysis of the victim’s hair to determine where she traveled prior to her death.

“The samples I gave to Jim told me her approximate location for the last two years of her lifetime,” Park says. “She moved around within the Northwest – mainly in the Idaho-Montana-Wyoming area and maybe into Oregon and Washington.”

After the scientists conduct more tests for oxygen isotopes in the woman’s teeth – isotopes that may reveal where her teeth formed and thus where she grew up – Park will examine missing persons records in areas the victim visited in hopes of identifying her.

“Every little bit helps,” the detective says. “You put pieces of the puzzle together to get a whole picture. And this is definitely something that will give us a piece of the puzzle.”

Another use of the new method is to analyze hair from a person or animal to learn about their past movements.

In the study, the researchers analyzed a hair sample from a person who moved from Beijing to Salt Lake City. Hair grown during three months before the move contained relatively high levels of oxygen-18 and hydrogen-2, reflecting high concentrations of those isotopes in Beijing drinking water. But in hair closer to the scalp – hair that grew after the move to Utah – the concentrations of those isotopes dropped significantly, consistent with lower levels in Salt Lake City’s drinking water.

Police could use this technique to check an accused criminal’s alibi that he had not been in the region where the crime occurred.

Ehleringer says anthropologists and archaeologists may use the method to analyze ancient hair samples to reveal where Native Americans migrated or show a Mormon settler’s movement from Missouri to Utah. Cerling says analyzing preserved bison hair may reveal more about their migration patterns when they were abundant.

To understand how drinking water affects isotope levels in hair, the researchers had to learn how foods influence isotopes in hair. As a result, archaeologists might analyze the hair of ancient people or animals to learn how much protein they ate, whether their diet was seafood or land-based, or what social class they occupied based on whether their diet was rich on meat protein or plant material.

There could be medical uses of the new method. Cerling says that because diabetics drink a lot of water, the proportions of oxygen in their hair from water and food would be different than in non-diabetics. Hair also might record isotope changes due to worsening symptoms of a dietary disease, Ehleringer notes.