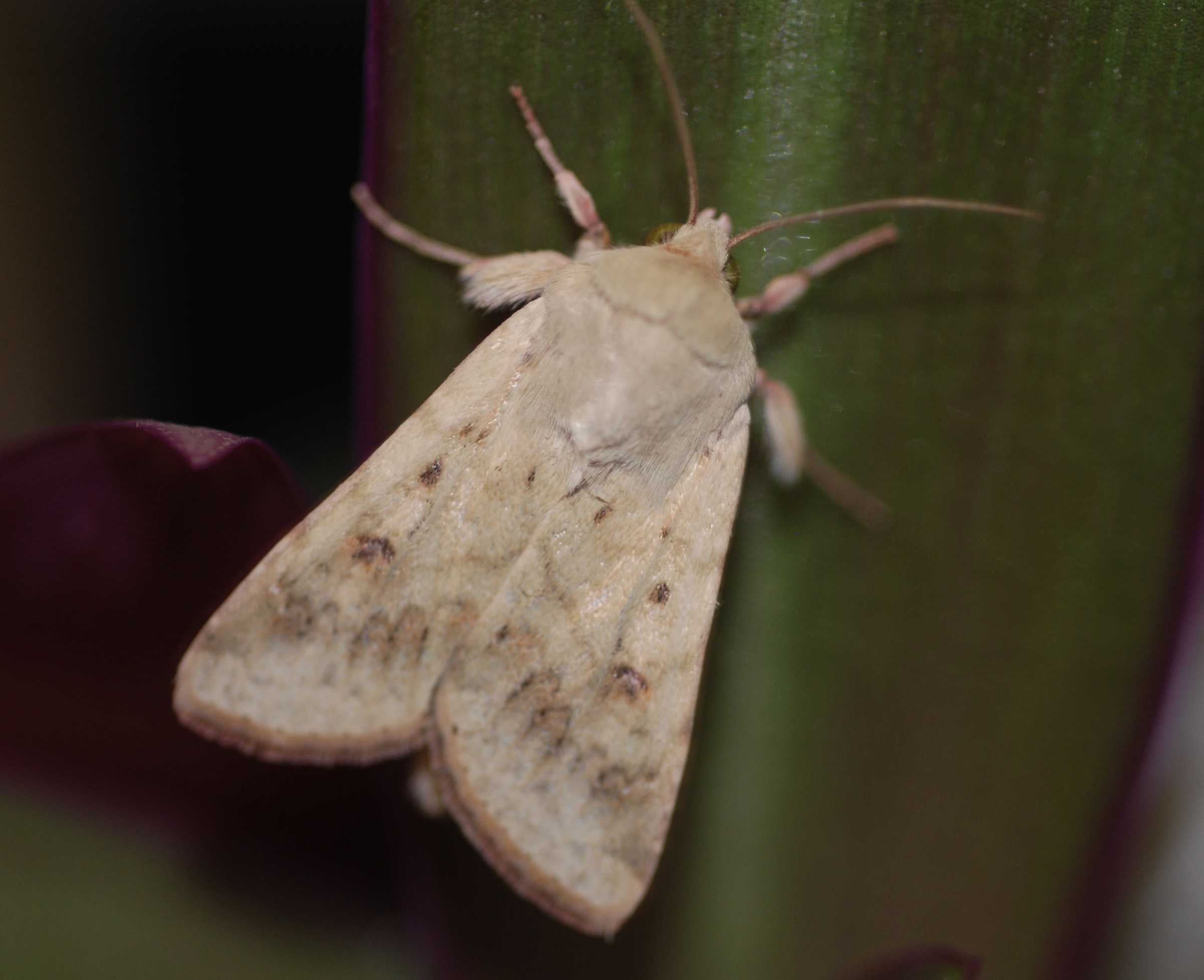 June 6, 2012 – Talk about throwing yourself into a relationship too soon.

A University of Utah study found that when a virgin male moth gets a whiff of female sex attractant, he’s quicker to start shivering to warm up his flight muscles, and then takes off prematurely when he’s still too cool for powerful flight. So his headlong rush to reach the female first may cost him the race.

The study illustrates the tradeoff between being quick to start flying after a female versus adequately warming up the flight muscles before starting the chase. Until the next study, it remains a mystery which moths actually reach the females: the too-cool, quick-takeoff males or the males who wait until they’re hot enough to take a shot. The latter may end up flying faster and more efficiently and win the race, despite a slow takeoff.

“What happens before flight has not been well studied,” says José Crespo, a University of Utah doctoral student in biology and first author of the new study, published online June 7 in the Journal of Experimental Biology. “To me, the story is you have a behavior – pre-flight warmup – that is switched on by smell.”

Senior author Neil Vickers, professor and chairman of biology at the University of Utah, says: “In many insects, moths in particular, all of their adult lives are affected by odor – all the activities they engage in that you and I see at night at the porch light are things typically affected by odor.”

Moths forage for nectars using flower odors. Males follow female sex attractants or pheromones to find the females. Then they have what Vickers calls “an odor dialogue” and mate. The females use odor to lay their eggs on the right plants.

“Finding out how odors switch on behavior is critical to the whole picture,” Vickers says. “Furthermore, because insects have this amazing ability to fly, which not many animals have, finding out how flight is turned on by odor is an issue relevant to many insects. … There is a whole constellation of behaviors driven by odor, and this is true of all manner of insects” and even other animals and people.

Vickers and Crespo conducted the study with University of Utah biology Professor Franz Goller. The research was funded by the National Science Foundation and National Institutes of Health.

The study involved a moth named Helicoverpa zea, commonly known as the corn ear worm. It belongs to the largest family of moths and butterflies – noctuids – which have more than 35,000 species worldwide, including the medium-sized moths many of us see in or near our homes.

“It’s a significant agricultural pest which attacks many different crops – corn, soy, tomato, strawberries,” Vickers says. Researchers use them because they are good models to show how odors are processed in the brain.

Virgin males were used in the study because it is standard protocol to use animals that haven’t previously mated or been exposed to pheromones.

To start the experiments, all the moths were chilled down to 46 to 50 degrees Fahrenheit, cool enough so they stay inactive, and so handling them before the experiments doesn’t prompt them to start warming up immediately.

The first experiments were conducted using a small, open roofed, cardboard wind tunnel about 11 inches long, 5.5 inches wide and 5.5 inches tall. A 1.2-inch tall, 1.2-inch diameter cylindrical wire cage, with no top, was placed upright inside one end of the wind tunnel, with an inactive moth at the bottom.

A fan blew a gentle, 1 mph breeze toward the moth, and one of six odors was released near the upwind end of the tube. One was the moth’s normal pheromone blend, one was the blend’s primary component, and the other four were odors (or in one case, no odor) that scientists believed wouldn’t attract the moths (and didn’t).

An infrared video camera – which measures temperatures – recorded the moths as they began their shivering warm-up and finally took off. The moths are seen in infrared turning from cooler purple-blue to warmer orange and even warmer red and yellow.

By analyzing the video after each of dozens of experiments, Crespo measured how long it took inactive moths to start shivering after smelling the odor, and how long they spent shivering until takeoff. The infrared video, one frame before takeoff, showed the temperature of the moth’s thorax at takeoff (the wings and all related muscles are in the insect’s thorax, the body section between the head and abdomen). Crespo also calculated the rate at which the moths warmed up.

Moths that did not smell pheromone flew in random directions when they finally warmed up. Moths that smelled the pheromone blend (and often the primary component alone) started shivering faster, took off sooner (less time shivering), did so at a lower temperature than other moths, and flew toward the odor.

Until now, researchers thought the moths simply warmed up as fast as they can. “These guys don’t all heat up at the same rate,” Vickers says. “The guys exposed to the pheromone odor, go ‘Wow!’ and they warm up faster and take off more quickly. And that compromises the flight power they can produce.”

In these experiments, wax was used to gently attach (not stick) an entomological pin to a moth’s thorax. The other end of the pin was attached to a force sensor, which in turn was wired to various electronics to read the results. A small Styrofoam ball was placed under the moth, which reflexively grabbed onto it with its legs. When Crespo gently pulled away the ball, the moth reflexively tried to fly upward, and the force of that effort was recorded. White and black lights – to which moths are attracted – were above the apparatus to induce the moths to fly with maximum force.

The test was repeated in small temperature increments, showing how warm a moth thorax must be for maximum flight power – about 90 degrees Fahrenheit – and that those in the study took off too cool at about 82 degrees Fahrenheit.

“However,” he adds, “if you take off with a lower temperature, we show you have less maximum power in flight, so we think there is a compromise between heating up faster to a lower temperature to arrive at that female first, or waiting a little longer to heat up to a higher temperature and make sure you’re going to make it to the female.”

“This is about a decision to get up and go: ‘This is the right smell. Let’s do it,’” Vickers says. “There are neurons that detect the odor, and they feed that information into the brain, and the brain says, ‘This is the right odor, this is a female,’ and then processes occur that we don’t know much about. But the brain sends instructions to the flight muscles to start warming up. The animal responds to this odor by warming itself at a faster rate than if it’s exposed to a non-female odor. At some level, we’ve moved a little step closer to understanding that black box that’s evaluating these inputs and internal conditions and deciding to move.”

Vickers adds: “Insect flight muscles are among the most metabolically costly in the animal kingdom. In order to fly, you have to use a lot of oxygen and generate the power. The decision to take flight after a female odor is not one that would be taken lightly by the moth because it’s expensive.”

“It’s costly to fly, to jump into a relationship,” he says.

Video and infrared video of a moth warming up may be viewed at:
http://www.youtube.com/watch?v=g1pXzlyIk8s