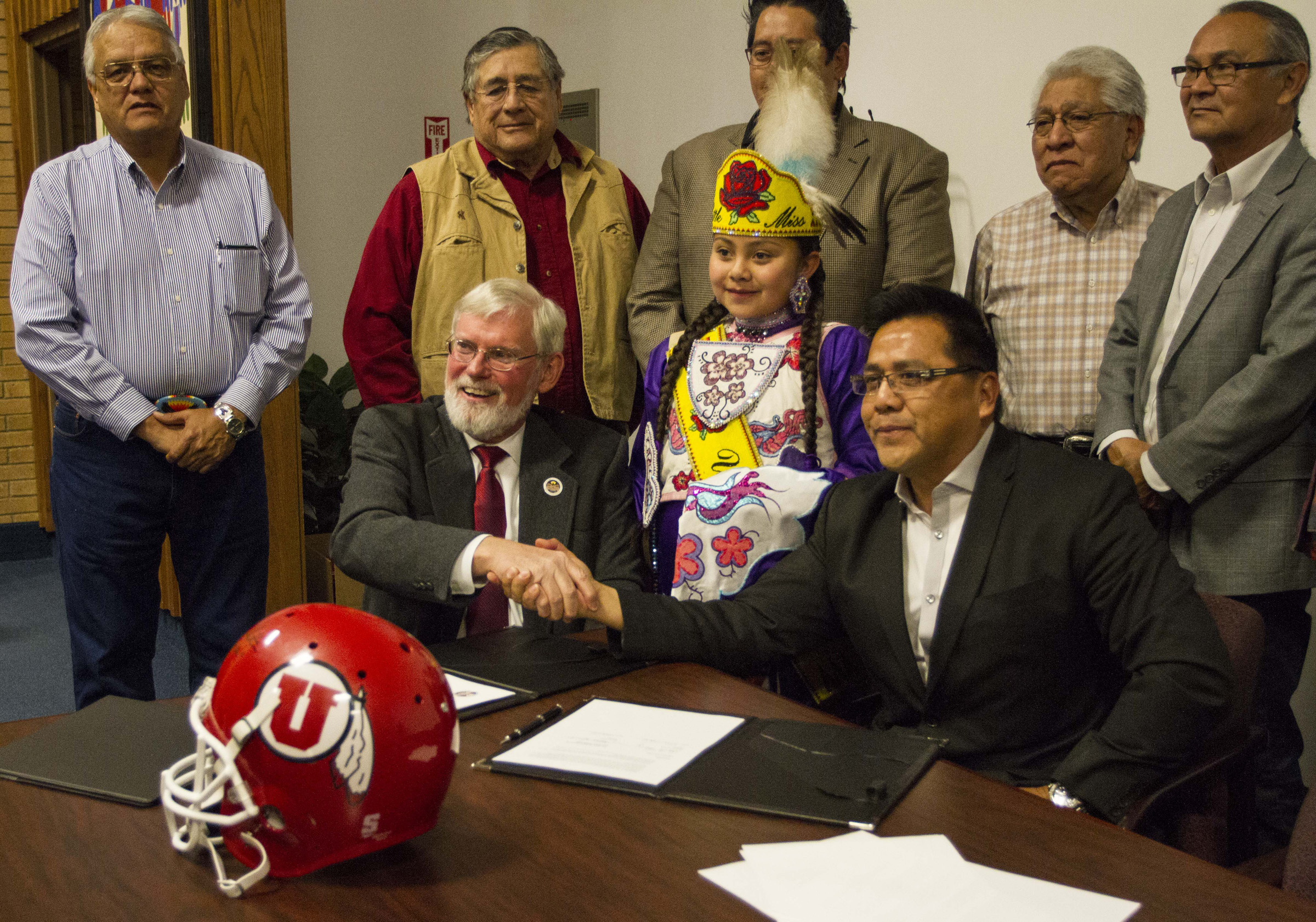 April 15, 2014 – Today the University of Utah and the Ute Indian Tribe of the Uintah and Ouray Reservation jointly announced they have signed a memorandum of understanding allowing the University to continue using the name “Utes” for its sports teams.

“The Tribe applauds the University’s commitment to respecting the Ute name and culture and to using the name in a manner that accounts for and promotes the interests of the Tribe,” said Howell. “This agreement will do a lot to promote positive educational opportunities for Ute and other American Indian youth and will enhance the positive working relationship between the Tribe and the University.”

“The University is honored to be allowed to continue using the Ute name, which the school has done with Ute Tribe support since 1972,” said Pershing. “We have pledged to do so with the utmost respect, recognizing that the Ute name is at the core of the cultural identity of the Tribe and its members. In return, we are working actively with the Tribe to promote and support access to higher education among its members.”

One key to the agreement is an education campaign for campus and fans about the history of the Ute Indian Tribe, as well as communicating standards for appropriate fan behavior. The campaign aims to promote cultural understanding in order to avoid behaviors and misunderstandings that dishonor the Ute and other American Indian populations.

“An educated understanding of the tribal Utes — as well as other native peoples in this region — is fundamental to an informed history of our state,” says Pershing. “From that acknowledgement comes authentic and respectful fan behavior. ‘Go Utes’ is not simply distinctive shorthand for ‘Utah.’ It is a much-loved phrase that at its best recognizes — and values — the richness of Ute Indian history and heritage.”

The memorandum of understanding is a public document and is available online here.

Major points of the agreement:

—     Term is for five years, and will be reviewed annually.

—     The University commits to funding scholarships for American Indian students, including a permanent scholarship category for Ute Tribal Members.

—     The University will work with the Tribe to create enrichment and educational opportunities for tribal youth, with the aim of encouraging, inspiring and supporting them to lead healthy lives and to pursue post-secondary education.

—     The University will appoint, with approval from the Utah Tribal Leaders Council, a special advisor to the president on Native American affairs, who will serve as liaison between tribal leaders and the University.

ABOUT THE UTE INDIAN TRIBE: