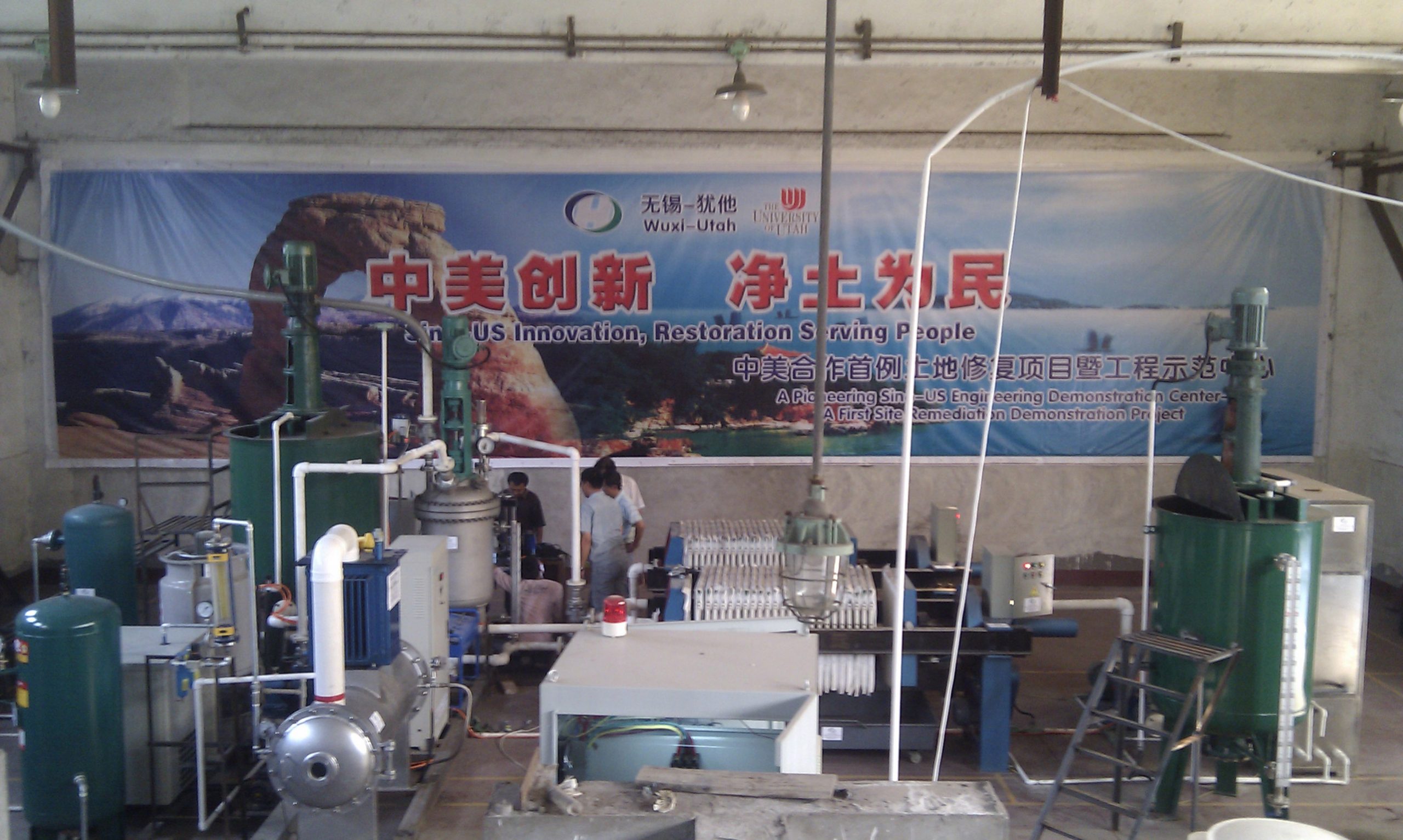 Oct. 13, 2010 — Microbubbles are a much bigger deal than they sound. If all goes as planned during a demonstration project in eastern China, microbubble technology developed at the University of Utah has the potential to boost a wide range of environmental cleanup efforts around the world. Uses include removing oil and gas byproducts from water, removing organics and heavy metals from industrial sites, and removing harmful algae from lakes.

“It’s very gratifying to see our technology at work in the field,” says Andy Hong, who developed the new process as a professor of civil and environmental engineering at the University of Utah. “If we are successful with this first project in China, we hope to do a lot more work there and secure additional projects in other countries.”

Hong released findings of his initial experiments in 2008 and 2009 in the journal Chemosphere. His central insight is that by infusing water or soil with pressurized ozone gas microbubbles, it is possible to expose pollutants and make them easier to remove. The process is called heightened ozonation treatment or HOT.

Until recently, heightened ozonation had not been demonstrated outside of Hong’s lab. The work in China is putting the new process to the test. The University of Utah has partnered with Honde LLC — a large Chinese environmental cleanup company — and the Chinese government to remediate an industrial site on the shore of Lake Taihu. The large lake (which is about half the size of the Great Salt Lake in Utah) is adjacent to Wuxi, a major Chinese city west of Shanghai with a population of about 4.5 million.

Lake Taihu is polluted by numerous contaminants. Wuxi is an industrial city in a region dotted with polluted factory sites. The lake receives runoff from across the region, which causes nutrients to collect in the lake and feed harmful algae.

“The lake requires extensive environmental cleanup after years of neglect,” Hong says. “We hope this restoration project will be the first among many to come for the area. We are fortunate that the Chinese government is aggressively cleaning up this area and willing to tackle challenging issues with new techniques that haven’t been used anywhere else. This is a great opportunity for us and China.”

The demonstration project began in September and is expected to last three months. The focus is removing heavy metals and other contaminants from the soil. The site is staffed by a team of Chinese managers, engineers, scientists and laborers. The centerpiece of equipment is a HOT reactor, which is a pressurized metal vessel that produces ozone microbubbles. The reactor is currently being used to treat soil, but it can also be used to treat water, algae or sewage waste.

The HOT reactor is placed on the site to be cleaned. Then contaminated soil is excavated and placed into the device. Organic contaminants (hydrocarbons) are removed first by repeatedly pressurizing and depressurizing the reactor with ozone gas, creating microbubbles that degrade the hydrocarbons. Metal contaminants then are removed by adding a chelating agent to extract them, then adding lime to precipitate the contaminants so they can be filtered out and then disposed.

“The clean soil will be used for tree planting on public lands, and the water is recycled and reused in subsequent batches of soil cleanup,” Hong says.

If the demonstration is successful, Hong expects the project to be replicated at other sites for different types of contaminants around Lake Taihu. Honde will manage that work. If it is successful, Hong also expects his new method to be applied in the United States and across the world. In addition to Honde, 7Revolutions Energy Technology Fund – an investment company based in Salt Lake City and a University of Utah startup – has licensed the technology and started a company to explore uses in North America and elsewhere.

“This project is a great example of how the technologies developed at the University of Utah are having an international impact,” says Jack Brittain, the university’s vice president of technology venture development. “Our researchers are among the best anywhere, and we need to do everything we can to help their technologies reach their full potential. We do that by making commercialization a focus on campus.”

The Lake Taihu demonstration project also illustrates the strong partnership between Utah and China. The state of Utah has many ties with China. But the project got a boost when the Utah Governor’s Office of Economic Development (GOED) hosted a delegation from Wuxi in 2009. That visit helped pave the way for the Lake Taihu project.

“We have worked hard to create a strong alliance with Wuxi and the rest of China,” says Brett Heimburger, the GOED’s regional director for Asia, “and we expect to see more great things from this partnership.”