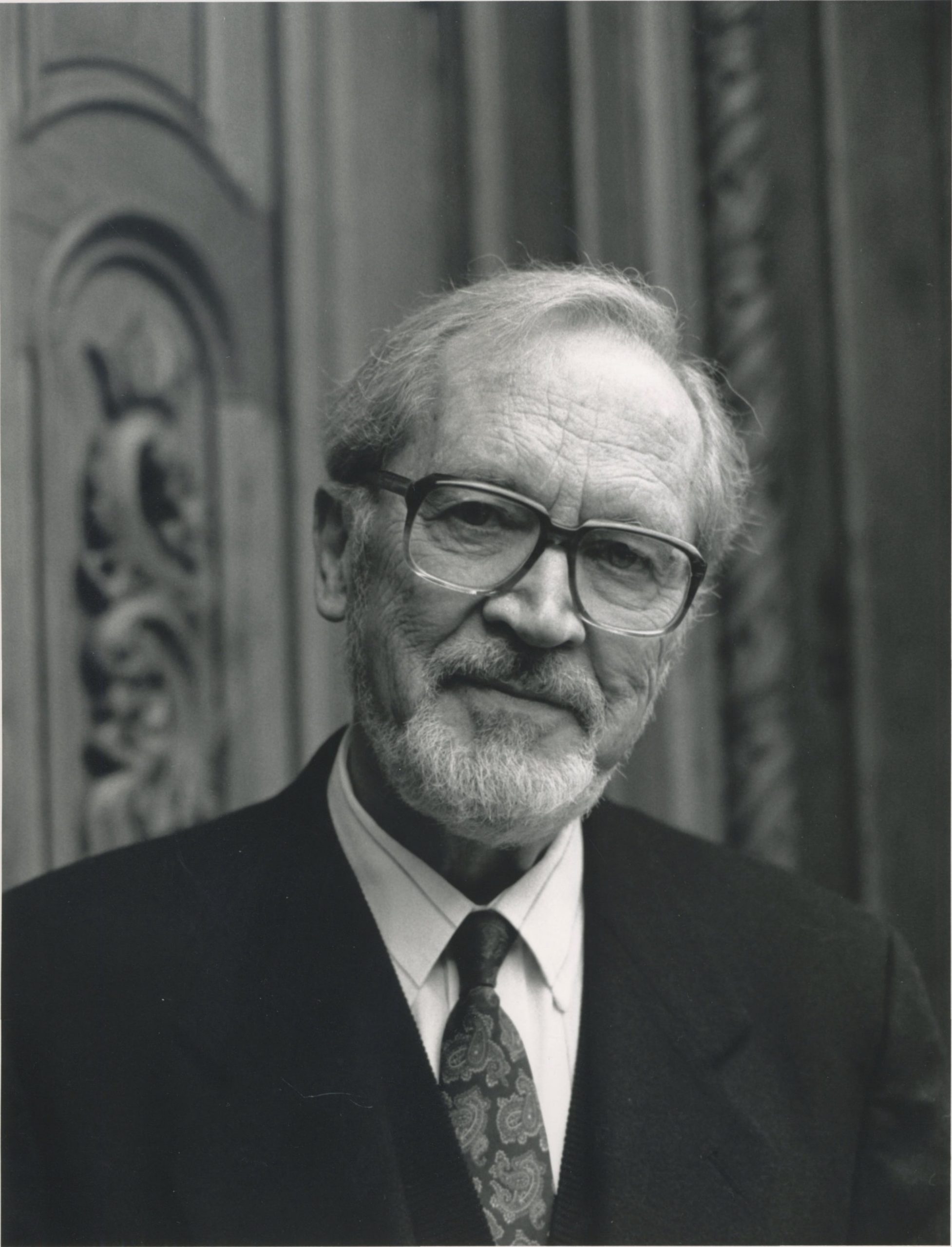 Mar. 19, 2008 – “The motto Wij zijn klein maar groot (We are small but great) expresses the sentiment of the Dutch in Utah,” wrote William Mulder, emeritus professor of American studies at the University of Utah. As a fellow Dutchman in Utah, Mulder achieved greatness on many levels, professional and personal, local and abroad.

Gentleman scholar, mentor, bibliophile, Mormon historian, English and American studies professor and advocate of Indo-American scholarship and understanding, Mulder, 92, died Wednesday, Mar. 12 at his home. Born in Haarlem, Holland in 1915, he immigrated to the United States with his parents in 1920, first to New Jersey and six years later to Salt Lake City.

Upon graduation from the University of Utah in 1940, he was elected to Phi Kappa Phi and Phi Beta Kappa honorary scholastic societies and returned to the U for his master’s degree in English in 1947. Mulder pursued graduate studies at Harvard University in an American Civilization program and was granted a Ph.D. “with distinction” in 1955.

Faculty member of the University of Utah English department since 1947, Mulder received an honorary doctoral degree in humanities in 1999 in recognition of his extraordinary contributions to the U. He was the founding director of the University of Utah’s Institute for American Studies and of the Center for Intercultural Studies (now the Middle East Center) and was for many years the editor of Western Humanities Review. Mulder received the Governor’s Award in the Humanities from the Utah Humanities Council in 1999.

His 41 years as University faculty were characterized with several leaves of absence to develop the American Studies Research Center in Hyderabad, India and to lecture in India for the U. S. Information Service. He also visited universities in Japan for the Asia Foundation to assess programs and library holdings in American Studies.

“Bill and his wife Helen forged international relationships, particularly with India, that continue today thanks to Bill’s acumen and attention to others,” says colleague, friend and professor emeritus Ed Lueders. “He was pivotal in his role as ambassador to academic visitors from abroad, acting as their unofficial hosts and providing a bridge to the University community.”

A forward-thinking leader with a global focus at a time before the world was connected by internet, satellite and cell phone, Mulder reached out internationally, setting precedence at the U for what would become a global commitment.

“Professor Mulder was a pioneering force in connecting the U to the world beyond Utah,” says University of Utah President Michael K. Young. “We would not be as prominent on the academic world stage without his immeasurable contributions to administration, collaboration and research. He will be profoundly missed.”

Mulder was renowned as well for his teaching, which has been described as “stunning,” graced with personal style, wit and dedication. “Bill had near perfection of his language which suited any occasion,” says Lueders. “He was always civil, always delivered himself with dignity and directness. He never had to search for a word-it was already there.”

“He possesses an exceptional humanity that permeates his teaching and inspires those around him,” wrote a student. Mulder was adamant about the necessity of personal growth in teaching and the constant viability of subject matter. “Inspired teaching, when the information is outmoded, is a vain flourish,” he asserted.

Writer and environmental activist Terry Tempest Williams said in her 2003 commencement address for the U that “Lives change at this university. Mine did. I remember the moment. The class was American Romanticism. The professor was Dr. William Mulder.”

Changing lives was something Mulder did often and indirectly. As an historian of the American West, his writing reached into the lives of the past and communicated those experiences to people today. “Professor Mulder has a long and important legacy of contributions to the field of Utah history,” says Phil Notarianni, director of the Utah State Historical Society. “He is considered a pioneer for his early work with Scandinavian immigrants in Utah in a time when little was being done on the ethnic history of the state.”

Mulder was the author of numerous histories, including: Homeward to Zion: The Mormon Migration from Scandinavia; The Mormons in American History; and Among the Mormons: Historic Accounts by Contemporary Observers which he edited, with the late A. Russell Mortensen.

He also contributed to American literature as an officer in the Modern Language Association as well as advisory committee member of the National Council on International Exchange of Scholars for Fulbright awards in American Studies. His service as president of the Utah Academy of Sciences, Arts and Letters and as chairman of the board of the Friends of the University of Utah Libraries was graced with wit and dedication that meant much to Utah.

Mulder remained active in academic circles into retirement as president of the Utah Academy and as a member of several boards on campus and in the community, including the Reynolds Association, the Maud May Babcock Reading Arts Society, Broadway Stage, Wasatch Westerners, Weber Studies, Dialogue and Friends of the U of U Marriott Library.

A brief memorial service will be held at the University of Utah Alumni House Saturday, Mar. 29 at 2 p.m. In lieu of flowers, the family suggests contributions to the U of U Marriott Library.