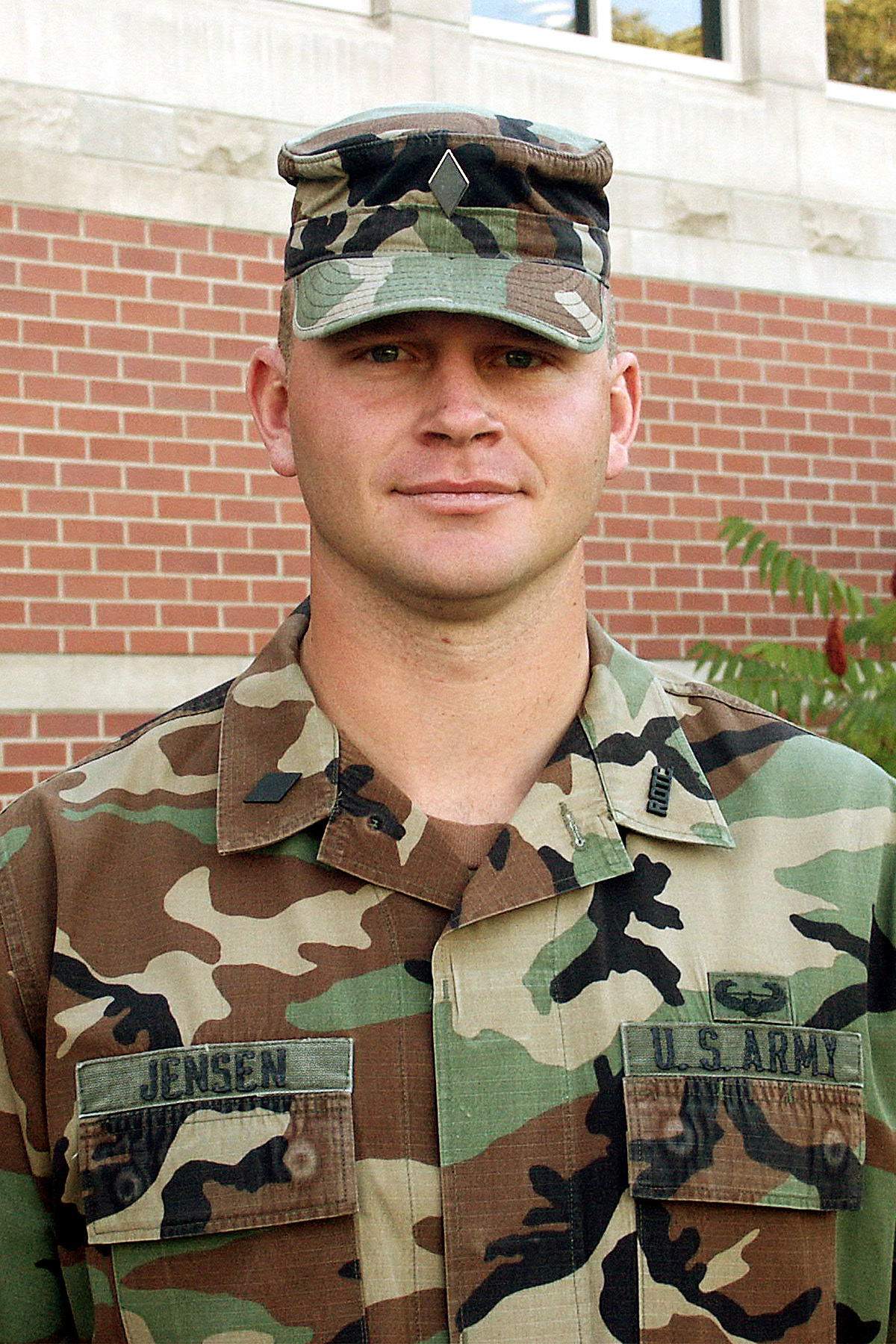 October 2 — On Monday, University of Utah Army ROTC Cadet Leonard “Lenny” Jensen will receive a $1,500 scholarship established in honor of the highest-ranking official killed in the 9-11 attack on the Pentagon. The Lt. Gen.Timothy J. Maude Memorial Fund Scholarship, the first and only one of its kind to be awarded this year, will be presented to 26-year-old Jensen in Washington, D.C., at noon, at the annual Officership Luncheon, to be held in the new Washington D.C. Convention Center. Gen. Burwell B. Bell III, the commanding general for U.S. Army Europe and 7th Army, and General Maude’s widow, Teri, will present Jensen with the award. The Association of the United States Army (AUSA) is paying for the trip for Jensen and his wife Marianne. They will leave Salt Lake City and travel to Washington on Saturday.

Maude, a three-star general, was Deputy Chief of Staff for Personnel for the U.S. Army. At the time of his death he was working on Green to Gold, a program that allows active duty enlisted soldiers the opportunity to attend college and be commissioned as officers through the Army ROTC Program.

With the support of Lt. Gen.Maude’s family and the Army Chief of Staff, the memorial scholarship fund has been established in General Maude’s honor to continue his efforts to “take care of soldiers.” The memorial fund will provide resources to assist soldiers enrolled in the U.S. Army’s Green to Gold program.

“I’ve read up a little bit on General Maude,” Jensen says. “What set him apart was his personality and his leadership.” Jensen hopes to see the Pentagon while in Washington next week.

Four years ago Jensen was awarded a Green to Gold scholarship, which has a cash value of up to $68,000 in tuition and fees. (The Green to Gold name describes going from “green,” as an enlisted soldier, to attaining the 2nd lieutenant’s gold bar.) Jensen is a senior nursing student at Westminster College, but participates in the University’s ROTC program through a partnership between the U and Westminster College.

Prior to receiving the Green to Gold scholarship, Jensen served in the U.S. Army for five years. His last duty was serving with the 101st Airborne Division, in an Air Defense Artillery unit stationed in Ft. Campbell, Kentucky.

Jensen, who currently resides in Midvale, Utah, was chosen from cadets from 272 Army ROTC schools nationally to receive the honor. After graduation next May he plans to enroll in a three-year master’s program at the University of Texas, which partners with the Army Medical Education Department. He plans to become a Certified Registered Nurse Anesthetist (CRNA).

Lieutenant Colonel Edwin L. Frederick, professor of military science and Jensen’s commanding officer at the University of Utah, notes, “We are extremely proud of Cadet Jensen and his accomplishments. His selection as the number one Green to Gold scholarship cadet in the nation is a great honor for the University of Utah and the community. Cadet Jensen will be a first-rate lieutenant and Army leader. His future is bright indeed.”

Jensen, who grew up in Bridgeland, Utah, located between Duchesne and Roosevelt, says, “I always wanted to be in the service since I was a kid.” Because his mother was the director of nursing at the Uintah Basin Medical Center in Roosevelt, which was located next to his school, Jensen spent a lot of time there waiting for their 25-minute ride home. “I pretty much grew up in the hospital,” he says. “It was her contacts that got me interested in becoming a CRNA.

Jensen began basic training two months after graduating from Union High School. He spent the next five years serving in Missouri, Texas, South Korea and Kentucky. Last summer Jensen trained as a nurse at Walter Reed Medical Center and cared for soldiers wounded in Iraq. “The whole hospital was full of these soldiers. It was humbling,” he says.

In addition to being a full-time student, Jensen spends 15 to 20 hours a week on ROTC work. The rest of the time he works as a licensed practical nurse (LPN) at Highland Care Center in Salt Lake City.