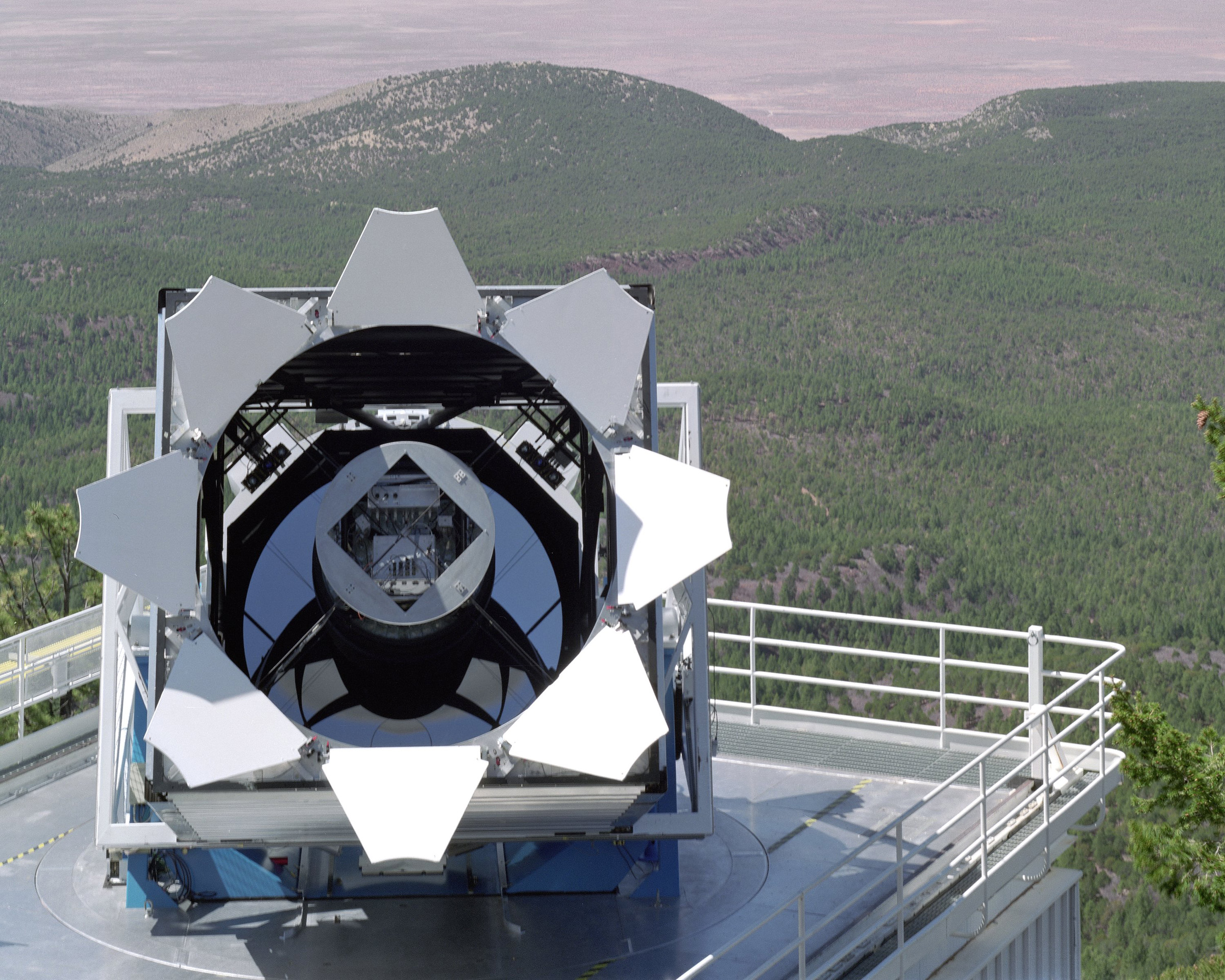 June 24, 2013 – University of Utah astronomers will participate in a six-year project to study the formation of our Milky Way galaxy; map stars, gas and supermassive black holes in 10,000 neighbor galaxies; and chart 1 million galaxies and quasars to learn about mysterious “dark energy” that makes the universe expand.

Five years after joining the third phase of the Sloan Digital Sky Survey, or SDSS-III, Utah’s largest research university is signing up for the fourth phase of the international effort to map the heavens – thanks to a $350,000 “challenge grant” from the Willard L. Eccles Charitable Foundation and a matching $350,000 from the university.

The sky survey’s first phase began in 2000. The University of Utah joined the six-year third phase in 2008 with a $450,000 donation from the Eccles foundation and university match. SDSS-IV begins in July 2014 and will operate until mid-2020.

Membership in the Sloan survey’s fourth phase is “a critical extension and expansion of the success achieved by the U’s astronomy program as a participant in SDSS-III,” says Michael Hardman, interim senior vice president for academic affairs.

“We are eager to continue our support for astronomy at the University of Utah,” says Stephen Eccles Denkers, executive director of the Willard L. Eccles Charitable Foundation.

Denkers noted that his family foundation’s support for University of Utah participation in the Sloan survey’s third phase “has been a key pillar of the establishment of the astronomy program at the university, and has led to multiple, high-profile results in research, education, outreach and external funding.”

Indeed, the university’s $900,000 participation since 2008 in the third Sloan survey attracted another $1.7 million in grants for faculty members doing research for the survey, says Dave Kieda, chair of physics and astronomy.

Adam Bolton and Kyle Dawson – both assistant professors of physics and astronomy – will serve as the U’s lead scientists in the fourth Sloan survey.

More than 30 research institutions will participate in SDSS-IV. The Sloan surveys use the 2.5-meter-diameter telescope at Apache Point Observatory at Sunspot, N.M.

That telescope “is the world’s most powerful facility for observing large volumes of space with the technique of spectroscopy,” Bolton says. “This technique breaks the light from stars and galaxies into its component wavelengths, allowing scientists to measure unique signatures of their orbital motions and chemical ingredients.”
The University of Utah signed and finalized a memorandum of understanding June 18 with the Seattle-based Astrophysical Research Consortium, which operates the Sloan surveys and hopes to raise $59 million for the survey’s fourth phase.

The university’s Center for High Performance Computing will host a massive archive of data collected by the fourth Sloan survey.

— The Apache Point Observatory Galactic Evolution Experiment 2, or APOGEE-2, “will carry out the most massive survey ever of the chemistry and orbital motion of stars throughout our own Milky Way galaxy to reconstruct the complex story of the galaxy’s formation,” Bolton says. “Scientists believe that the Milky Way was assembled from multiple generations of stars and multiple smaller galaxies. APOGEE-2 will provide direct access to the archaeological record of this history.”

— Mapping Nearby Galaxies at Apache Point Observatory, or MaNGA, will observe about 10,000 galaxies in the “local” or neighboring part of the universe “and build two-dimensional maps of the motions of the stars, gas and supermassive black holes within them,” the researcher says. “MaNGA will be more than 10 times larger than any previous similar project, and will provide the most comprehensive census ever of the demographics and internal structure of galaxies in the present-day universe.”

— The Extended Baryon Oscillation Spectroscopic Survey, or eBOSS, will assemble a three-dimensional map of the positions of more than 1 million distant galaxies and quasars, which are bright centers of galaxies powered by supermassive black holes.

“Scientists will analyze the features in this map to learn about the nature of ‘dark energy,’ a mysterious substance that is driving the expansion of the universe,” Bolton says. “Due to the time it takes light to reach us from these galaxies and quasars, this map will be a window onto the universe between 6 billion and 10 billion years ago, a cosmic epoch that has not yet been explored by a large survey like this.”

Scientists believe only 5 percent of the universe is made up of visible matter, while 27 percent is made of still-unidentified “dark matter” and 68 percent is so-called dark energy that is working against gravity to make the universe expand.

Bolton will serve as principal data scientist for SDSS-IV, and Dawson as instrument scientist for the eBOSS project. Kieda, who becomes dean of the U’s graduate school Aug. 1 – will serve on the Sloan collaboration’s advisory committee.

The W.L. Eccles foundation played a key role in establishing the U’s astronomy program. In addition to donating half the university’s membership in the Sloan surveys, the foundation spent $88,000 to refurbish the observatory on the South Physics Building and $680,000 for the university’s 32-inch research telescope atop Utah’s Frisco Peak,

SDSS-IV is described in “SDSS-IV: Mapping the Milky Way, Nearby Galaxies and the Distant Universe” at http://www.sdss3.org/future/sdss4.pdf