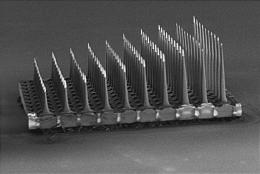 About a dozen faculty members and students from the University of Utah Dept. of Physics are involved in VERITAS, a $13.1 million gamma ray observatory to be built in Arizona. The observatory will be an array of dish-shaped telescopes designed to observe extremely violent events in the universe that generate high-energy gamma rays.

A news release announcing construction of VERITAS was issued today by the Smithsonian Astrophysical Observatory and the National Science Foundation. A copy of the release is below.

The University of Utah’s VERITAS team is headed by David Kieda, a professor of physics.

Mount Hopkins, Ariz. — The Smithsonian Astrophysical Observatory reports the start of construction of VERITAS, the Very Energetic Radiation Imaging Telescope Array System. The project is being funded by the Department of Energy and the National Science Foundation.

VERITAS will be an array of four 12-meter-diameter [39.4-foot-diameter] optical reflectors with ultra-fast cameras which together will form one of the most sensitive very high energy gamma-ray observatories in the world. Each of the four telescopes will have 350 mirror facets creating its 12-meter aperture and each will be equipped with a 499 pixel camera. The target date for completion of construction is October 1, 2006. The project budget for construction is $13.1 million.

VERITAS will be located in Horseshoe Canyon at the 5,800 foot level on Kitt Peak in southern Arizona. This site is within the leasehold for Kitt Peak National Observatory and provides high altitude and easy access with excellent shielding from artificial lights.

The VERITAS Collaboration has built a prototype telescope and camera to demonstrate the design concepts for the full VERITAS array. This prototype will be upgraded to provide one of the four telescopes of VERITAS. The prototype telescope is located at a temporary site at the Whipple Observatory Administrative Complex, and it will be moved to the Kitt Peak site in 2006.

The technique used to detect very high energy gamma rays was pioneered at the Smithsonian’s Whipple Observatory using the 10-meter [32.8-foot] optical reflector built in 1968. Very high energy gamma rays (photons with energy more than a million times the energy of a photon of visible light) interact with the upper atmosphere and initiate a cascade or shower of particles. The showers lead to a short burst of blue light. Using arrays of fast photo-detectors at the focus of the large optical reflector the Whipple group recorded the image of the cascade of particles and showed that they could identify those initiated by gamma rays from the much more numerous background produced by charged cosmic rays.

Using this technique the Whipple group, with their collaborators, detected the first source of TeV gamma-rays in the Galaxy in 1989 (the Crab Nebula, a supernova remnant) and the first extragalactic source in 1992 (Markarian 421, an active galactic nucleus or quasar). Since that time a number of overseas observatories have adopted the Whipple technique and more than a dozen sources have been established.

VERITAS will have a sensitivity that exceeds that of the existing Whipple telescope by a factor of ten and it is anticipated that more than a hundred sources will be detected. The scientific objectives of the project include the study of pulsars, supernova remnants, x-ray binaries, black holes, active galactic nuclei, and gamma-ray bursts. These cosmic particle accelerators may make possible the investigation of new physics at extreme energies which are only just matched on Earth by giant particle accelerators.

Through its Associates Program, VERITAS will serve the observing needs of scientists at additional institutions. The Smithsonian Astrophysical Observatory is the lead organization and host for VERITAS, and the Project Office is at the Whipple Observatory Administrative Complex in Amado, Arizona. In addition to funding from the Department of Energy and National Science Foundation, the project receives support from the Smithsonian Institution, PPARC [Particle Physics and Astronomy Research Council] in the U.K., Enterprise-Ireland in Ireland and NSERC [Natural Sciences and Engineering Research Council] in Canada.

VERITAS will come into operation prior to the 2007 launch of NASA’s Gamma-ray Large Area Space Telescope (GLAST), for which DOE is a partner in the main instrument, the Large Area Telescope. GLAST is the next large space-based gamma-ray telescope and will overlap VERITAS’s lower energy range, the first time that space- and ground-based telescopes have provided such complementarity. Together VERITAS and GLAST will make observations of cosmic gamma rays over five decades of energy and greatly extend our knowledge of the universe at extreme energies.

Further information on VERITAS is available at http://veritas.sao.arizona.edu or from the Public Information Office of the Whipple Observatory at 520-670-5706.