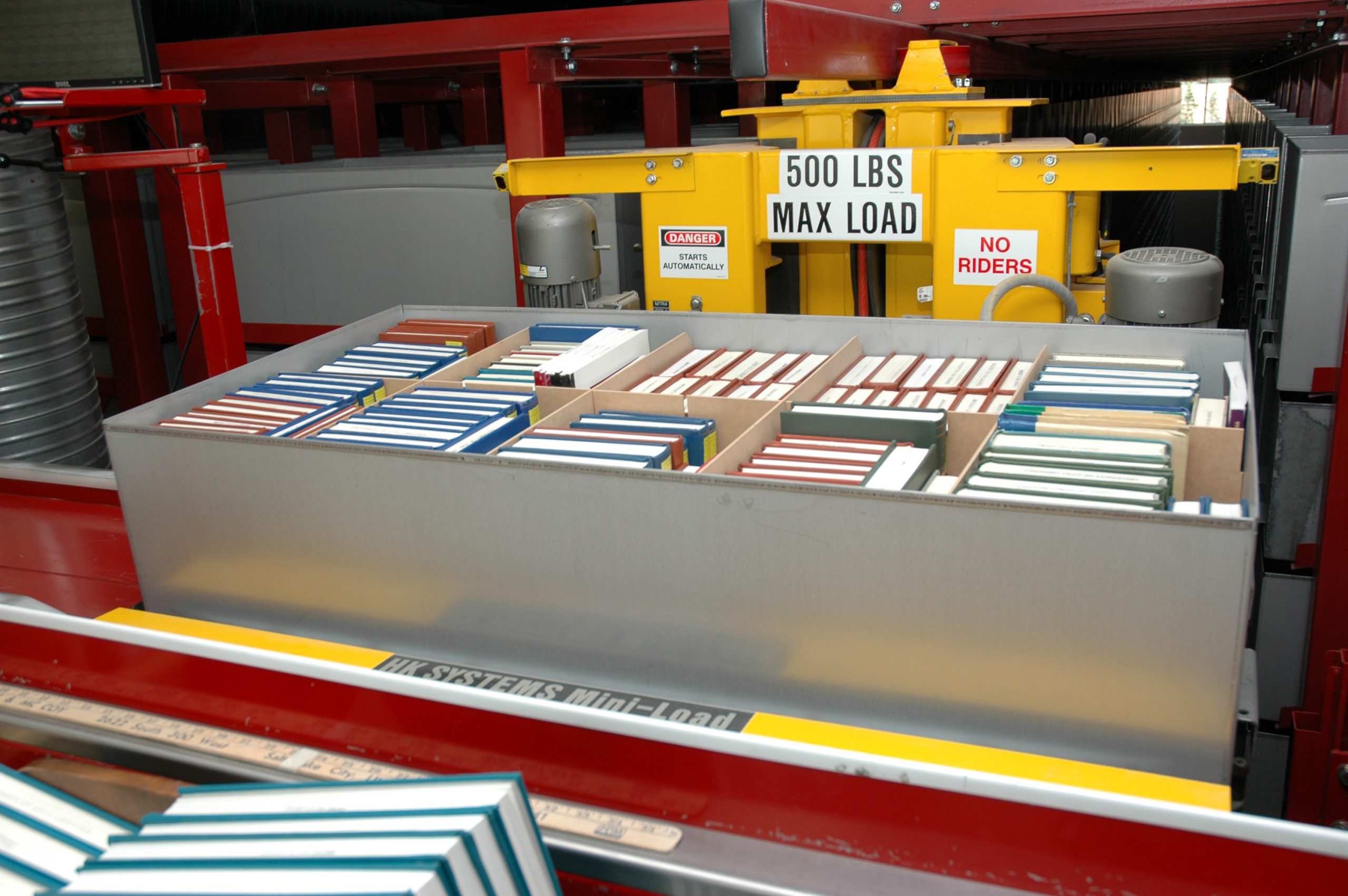 Jan. 15, 2008 – Students at the University of Utah’s J. Willard Marriott Library can now get their books with a simple “click” through the library’s new Automated Retrieval Center (ARC)–the largest library robotic storage and retrieval system in North America. The University of British Columbia’s library unit comes in second.

Patrons requesting items housed in the ARC need only select the items from the online catalog and the items will be automatically retrieved and delivered to the reserve desk on the first floor. The process takes less than five minutes and students and faculty can order books from home or office ahead of time.

Containing 19,181 storage bins that now hold roughly one-million items (one-third of the library’s three-million volume print collection), the Marriott Library’s ARC has a long-term storage capacity of approximately two million items. Four robotic retrieval machines locate and deliver bins to library staff, who then distribute items to patrons. Located on the west side of the library, the ARC spans a total of 3.5 stories (1.5 stories underground and two above ground) with a footprint of 14,000 square feet and a volume of 704,000 cubic feet.

While one might marvel at the size and scope of the Marriott’s ARC, the larger question begs, “Why do we need massive storage systems for books in this age of electronic information?”

“Use of electronic journals and e-books is certainly on the rise, but we will always have demand for our traditional collections and will continue to acquire more, especially unique and rare collections,” explains Joyce Ogburn, university librarian and director of the J. Willard Marriott Library. A large portion of the Western Americana collection, containing books about the history and culture of Utah and the west, is housed in the ARC. “Western Americana covers everything from mining, to religion, to politics and the arts and beyond. We even have a wonderful collection of cookbooks that have been donated over the years,” continues Ogburn. The cookbook collection contains over 5,000 titles, including books from the late Alice Marriott, who developed the menus for the Marriotts’ first food enterprise, the Hot Shoppes (started in the late 1920’s), as well as hundreds of European cookbooks from Horst Schoeber, the chef for Salt Lake’s Newhouse Hotel during the 1930’s and 40’s.

While the Marriott Library has an aggressive digitization program that is making materials available to the world via the internet, the need to access materials housed in the library will always remain, and the Marriott Library sees patrons from all over the nation through its doors. “We recently had a couple from Michigan visit us,” comments Paul Mogren, special collections librarian, “They were in Salt Lake for a Michigan State game, and they were interested in the writings and art of a female Utah artist from the early 1900’s. We were able to provide them with the book that contained all of that.”

In addition to special collections, the ARC also contains bound journals, government documents and microforms, portions of the University archives, and the Dewey Collection (the original U of U library holdings prior to 1968).

The ARC was purposely planned to house the less frequently circulated materials, leaving the more popular collections for patrons to browse in the stacks by subject matter. Thus far, requests have totaled about 100 per day. In the four months that the ARC has been in operation, about 50 percent of the requests have come from other colleges and universities throughout Utah and the United States via the interlibrary loan system.

“Using the ARC in tandem with new access services such as digital delivery means we can deliver materials throughout Utah and the nation faster and more efficiently. The ARC also provides a more secure and environmentally controlled ‘home’ enhancing the preservation and the lifespan of the materials,” says Ian Godfrey, facilities and access services manager for the Marriott Library. Additionally, the ARC has freed-up approximately 80,000 square feet of stacks space, allowing the library to build new high-tech classrooms, an expansive knowledge commons and other student-centered areas.

The U of U’s ARC was manufactured and assembled by HK Systems, a national company which has roots at the University of Utah. HK Systems is the private resultant company of the merger of Harnisfeger Engineers and Eaton-Kenway, Inc. Kenway was the pioneer in real time computer controlled storage and retrieval technology in the 1960’s and was founded by Ken Richins (the “Ken” in Kenway) and Dr. Wayne Brown (the “way” in Kenway), both graduates of the University of Utah’s School of Engineering.

Institutions from across the nation are curious as to how to manage the loading and operation of such systems. “I have had calls from librarians at the University of Chicago and many other large institutions that are planning for automated systems like ours,” reflects Godfrey. “It can be overwhelming to think about a whole new system, but in the long run it is worth the effort.”

The ARC is part of the library’s comprehensive renovation, which broke ground in June of 2005 and is scheduled for completion in the fall of 2008. For additional information, including high-resolution images, go to www.lib.utah.edu/libraryinfo/news/press/.