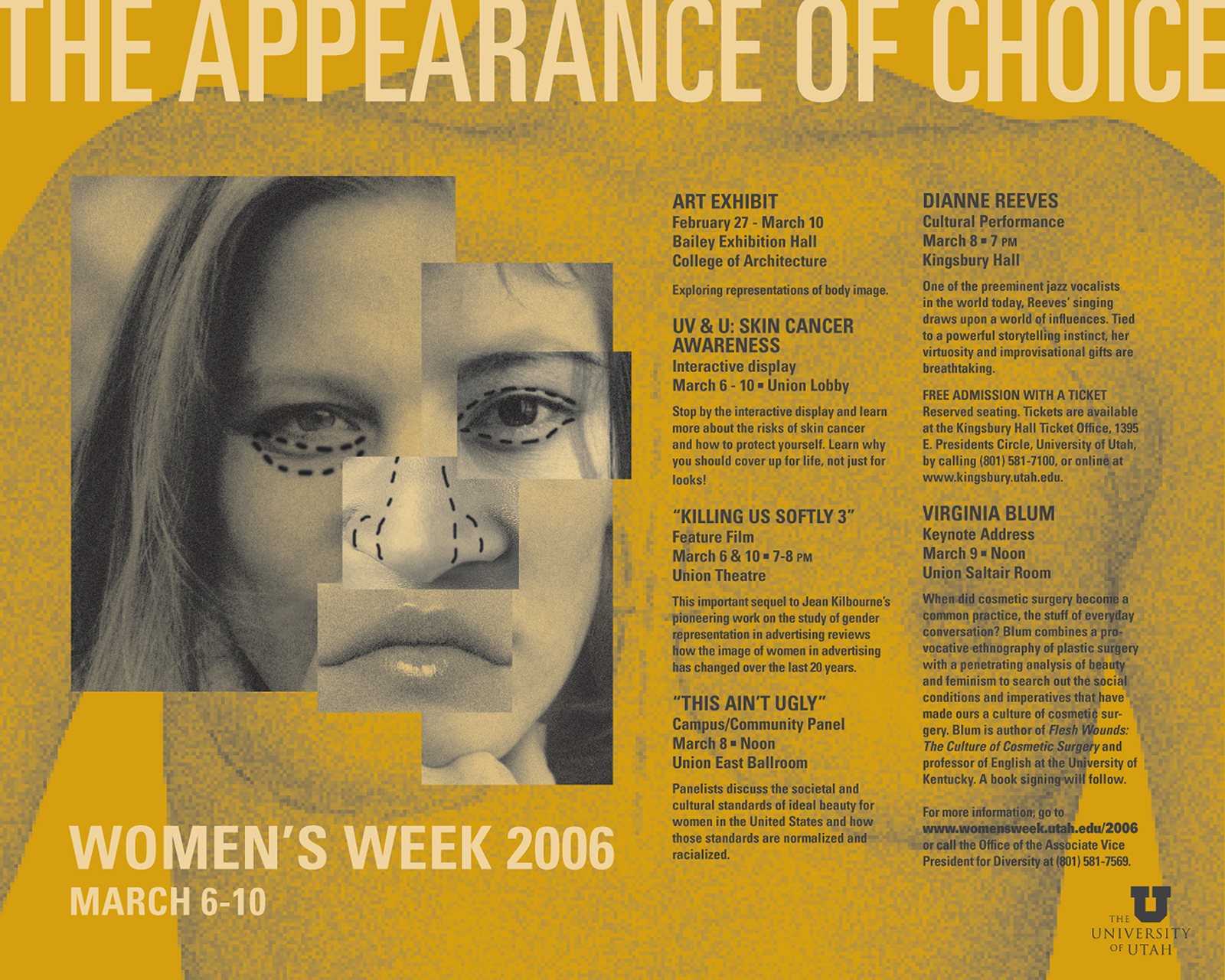 March 1, 2006 — When did cosmetic surgery-or the malleability of one’s appearance- become a common practice, the stuff of everyday conversation?

Women’s Week 2006 at the University of Utah, to be held next week, March 6 through 10, will explore the choices women make within representations of body image.

Virginia Blum, author of Flesh Wounds: The Culture of Cosmetic Surgery and professor of English at the University of Kentucky, will deliver the Women’s Week keynote address on Thursday, March 9, at noon, in the University’s Union Saltair Room. Blum combines an ethnography of plastic surgery with an analysis of beauty and feminism to search out the social conditions and imperatives that have influenced today’s culture. This lecture is free and open to the public, as are all of the Women’s Week events. A book signing will follow.

According to Kristi Ryujin, planning committee co-chair, “This year’s Women’s Week celebration committee has been particularly interested in the commercialization of women’s bodies. The overwhelming focus on plastic surgery, dieting and ‘transformation’ seems to permeate every aspect of our lives. From commercials advertising dangerous surgeries to television shows focusing on the “ugly duckling” transformed into the “swan,” women are being admonished that their bodies are not good enough and that, ultimately, there is simply one ideal we should all be striving for, regardless of ethnicity, body type or age. Our committee hopes that this year’s events will provide an alternative voice and influence the larger community to challenge the pervasive notion that women’s bodies are not their own.”

Prior to Blum’s address on Thursday, the Women’s Week 2006 Committee and the U’s Presidential Commission on the Status of Women will present the seventh annual Linda K. Amos Award to an individual for distinguished service to women at the University of Utah. The award recognizes a female staff or faculty member who has selflessly given time and energy to improve the educational and/or working environment for women at the U.

As part of Women’s Week, an interactive display, “UV & U: Skin Cancer Awareness,” will be held daily, March 6 through 10, from 10 a.m. until 2 p.m., in the lobby of the Olpin Union, 200 S. Central Campus Drive. Participants will learn more about the risks of skin cancer and how to protect themselves as well as sign up to win sun protection gear and T-shirts.

This year’s Women’s Week art exhibit will be held Feb. 27 through March 10, in Bailey Exhibition Hall, in the U’s College of Architecture, 375 S. 1530 E., on the University of Utah campus. The 2006 exhibit will feature nine artists working in a variety of media-Rebecca Campbell, Ruby Chacón, Valerie Dow, Teresa Flowers, Deborah Hake Brinkerhoff, Tracy Longley Cook, Alana Peterson and Kim Riley-exploring the choices women make within representations of body image. Hours for the exhibit are weekdays, 8 a.m. to 5 p.m.

The Women’s Week feature film will be “Killing Us Softly 3,” by Jean Kilbourne, a sequel to Killing Us Softly (1979) and Still Killing Us Softly (1987). Kilbourne’s films and her pioneering work on the study of gender representation in advertising have influenced millions of college and high school students. Using more than 160 advertisements and commercials to critique advertising’s image of women, Kilbourne reviews how the image of women in advertising has changed over the last 20 years. The feature film will be screened on March 6 and 10, from 7 until 8 p.m., and again from 8 until 9 p.m., in the Union Theatre, 200 S. Central Campus Drive. The theatre is located in the south wing on the main floor. Admission to the film, which runs 34 minutes, is free and open to the public.

A campus/community panel, “This Ain’t Ugly,” will be held Wednesday, March 8, at noon, in the Union East Ballroom, 200 S. Central Campus Drive. Panelists from the campus and community will discuss the societal and cultural standards of ideal beauty for women in the United States and how those standards are normalized and racialized.

Dianne Reeves, one of the preeminent jazz vocalists in the world today, will present this year’s Women’s Week concert on Wednesday, March 8, at 7 p.m., in Kingsbury Hall, 1395 E. Presidents Circle, on the University of Utah campus. Last month, Reeves was awarded her fourth Grammy for the soundtrack to the critically acclaimed Good Night, And Good Luck, making Reeves the only artist in history to have three consecutive recordings win in a vocal category. Reeves has recorded and performed extensively with Wynton Marsalis and the Lincoln Center Jazz Orchestra. She has recorded with Daniel Barenboim and the Chicago Symphony Orchestra and was a featured soloist with Sir Simon Rattle and the Berlin Philharmonic.

Women’s Week at the University of Utah recognizes and celebrates the historical and contemporary contributions of women. For more than two decades, the annual event has created a forum for the campus and community to discuss issues that affect all women.

All Women’s Week 2006 events are free and open to the public, although tickets are required for the March 8 Dianne Reeves concert. Free tickets for reserved seating are available at the Kingsbury Hall Box Office, 1395 E. Presidents Circle, University of Utah, by calling 801-581-7100, or online at www.kingsburyhall.org. For more information on Women’s Week, go to www.womensweek.utah.edu/2006 or call the Office of the Associate Vice President for Diversity at 801-581-7659.