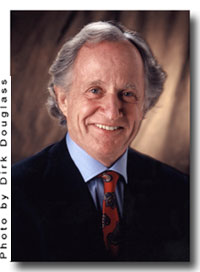 Businesswoman, philanthropist and ardent supporter of The University of Utah College of Pharmacy, Claudia Skaggs Luttrell continues the tradition her family established at The Scripps Research Institute (TSRI) by serving as president of The Skaggs Institute for Chemical Biology as well as serving on the TSRI Board of Trustees. She is a firm believer that the pharmaceutical and biomedical sciences are critical in bringing new medicines to people’s lives more quickly and less expensively. As chair of the The Skaggs Oxford Scholarships Program, she was instrumental in developing an international academic training program between The Scripps Research Institute and Oxford University in England. Founder and former CEO of Meadowlands Veterinary Hospital, Luttrell is active on the boards of several organizations, including the Skaggs Family Foundation for Roman Catholic and Community Charities, the ALSAM Foundation, the Skaggs Institute for Research and The University of Utah’s National Advisory Council.

After a successful career in commercial litigation, Kent H. Murdock joined O.C. Tanner Company as president in 1991 and was elected chief executive officer in 1997. As CEO, he has led the charge to innovate service and performance recognition with state-of-the-art products, services and strategy. Murdock has published in President and CEO magazine and has appeared on CNN and CNBC to discuss strategic recognition. He serves as vice chair of Intermountain Healthcare’s board of trustees and as a member of the boards of the Tanner Lectures on Human Values and the Tanner Charitable Trust, a private foundation.  Additionally, he is a member of the advisory boards of the College of Humanities and the David Eccles School of Business at The University of Utah. Murdock graduated from The University of Utah with a bachelor’s degree in 1972 and J.D. in 1975.

Founder and chairman of JetBlue Airways, David G. Neeleman has dedicated a lifetime to improving low-cost travel. He currently serves as JetBlue’s chairman of the board and is focusing on developing the airline’s long-term vision and strategy. A former University of Utah student, Neeleman’s career in the airline industry began in 1984 when he co-founded Morris Air. As president of Morris Air, he implemented the industry’s first electronic ticketing system and pioneered a home-reservationist system. Now the foundation of JetBlue Airways’ unique call center, this system allows all calls to JetBlue’s reservation number to be handled by reservationists working out of their homes. JetBlue began operations in February 2000 from its base at New York’s John F. Kennedy International Airport and now serves 54 destinations across the U.S and the Caribbean. By the end of 2007, JetBlue’s fleet included 105 Airbus A320 aircraft and 30 EMBRAER 190 aircraft.

Dinesh C. Patel is a managing director and founding partner of vSpring Capital, an early-stage venture capital fund with $350 million under management. From 1985 to 1999 he served as co-founder, chairman of the board of directors, president and CEO of TheraTech, Inc., a Salt Lake City based company pioneering the development and manufacturing of innovative drug delivery products. Patel has received numerous awards, including the 2006 Utah Technology Council Hall of Fame, 2006 Pathfinder Award, 2006 Ellis Island Medal of Honor, Entrepreneur of the Year Award (Mountain West Venture Group) and Scientific and Technology Development Pioneer of Progress Award. Patel co-chaired Governor Jon M. Huntsman Jr.’s transition team, currently serves on the board of the Utah Policy Partnership and was recently appointed chairman of the USTAR governing authority board. Born and raised in Zambia, Patel earned his undergraduate degree in India and his Ph.D. from the University of Michigan.

Distinguished professor of human genetics and biology at The University of Utah School of Medicine, Mario R. Capecchi received the 2007 Nobel Prize in Physiology or Medicine, sharing it with two other researchers. His pioneering work on the development of gene targeting in mouse embryo-derived stem (ES) cells has revolutionized mammalian biology and benefited all fields of biomedicine. A member of both the National Academy of Sciences and the European Academy of Sciences, Capecchi has previously been recognized with other prestigious honors, including the Kyoto Prize in Basic Sciences (1996), the Lasker Award for Basic Medical Research (2001) and the National Medal of Science (2001). Born in Verona, Italy, he received his B.S. in chemistry and physics from Antioch College and his Ph.D. in biophysics from Harvard University. His research interests include the molecular genetic analysis of early mouse development, neural development in mammals, production of murine models of human genetic diseases, gene therapy, homologous recombination and programmed genomic rearrangements in the mouse.