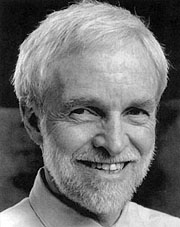 May 5, 2006 — David S. Chapman, professor of geology & geophysics and dean of The Graduate School at the University of Utah, was honored at today’s University commencement ceremonies with the Rosenblatt Prize for Excellence, the U”s most prestigious award. The $40,000 gift is presented annually to a faculty member who displays excellence in teaching, research and administrative efforts.

The Rosenblatt Prize Committee, a group of distinguished faculty members, recommends selected candidates for the award. The University president makes the final selection. U President Michael K. Young presented the award to Chapman. “The Rosenblatt honor recognizes Dave’s award-winning teaching skills, his valuable and ground-breaking research into global warming and other geothermal processes and his admirable and efficient administrative skills. The award also recognizes the extraordinary contributions he has made, not only in his field and to the University over a 30-year period, but as an internationalist, having taught on four continents—in Africa, Europe, New Zealand and North America. We are honored to have Dave as a faculty member and mentor leading The Graduate School.”

Chapman is recognized as one of the top solid-Earth geophysicists in the world measuring and interpreting heat and mass transfer in the geologic environment. His original contributions to the knowledge of the earth span a wide range of subjects, all concerned with temperatures in the earth and the way in which temperatures influence geologic processes. His early innovative work measuring the heat loss of the earth is widely quoted in textbooks.  Most recently Chapman developed methods to assess the amount of global warming since the time of the Industrial Revolution by measuring temperatures in drill holes.

In receiving the prize, Chapman notes, “Credit for this wonderful personal recognition must also go to the Department of Geology and Geophysics, for providing a culture for growth and creativity, and particularly to my students, past and present, who are at the center of my research and teaching. I love the classroom, the energy that arises from close encounters with eager students and the opportunity to engage and enthuse them with ideas.”

Chapman, recognized for a high dedication to teaching, has received outstanding teaching awards at departmental, college and university levels. Chapman’s colleague, Frank Brown, professor of geology and dean of the College of Mines and Earth Sciences, notes: “To my knowledge, David is the only current faculty member who has captured the ‘triple crown’ of University of Utah teaching awards—University Professor, Distinguished Teaching Award and the most coveted of teaching awards, the Calvin S. and JeNeal N. Hatch Prize for Excellence in Teaching. It is symptomatic of David’s deep concern for the professional development of his students that he established an endowment for student travel with the cash awards that accompanied these prizes.

Chapman’s service to the University has been as a faculty member, department chair, associate dean of The Graduate School and now as dean of The Graduate School and associate vice president for graduate studies. As graduate dean, Chapman implemented a tuition benefit for 2,000 graduate students, created a health insurance benefit for teaching and research assistants in 2004 and expanded training for international teaching assistants.

Chapman began his career in geophysics as a classical heat flow scientist, but his contributions to geophysics have broadened continuously throughout his career. He has authored more than 120 publications, including two Scientific American articles, four papers in Nature and one in Science magazines.  Chapman leads an active research group studying thermal aspects of geological processes and is currently the chairman of the International Heat Flow Committee.

This release and a downloadable photo of Chapman are available online at www.unews.utah.edu.