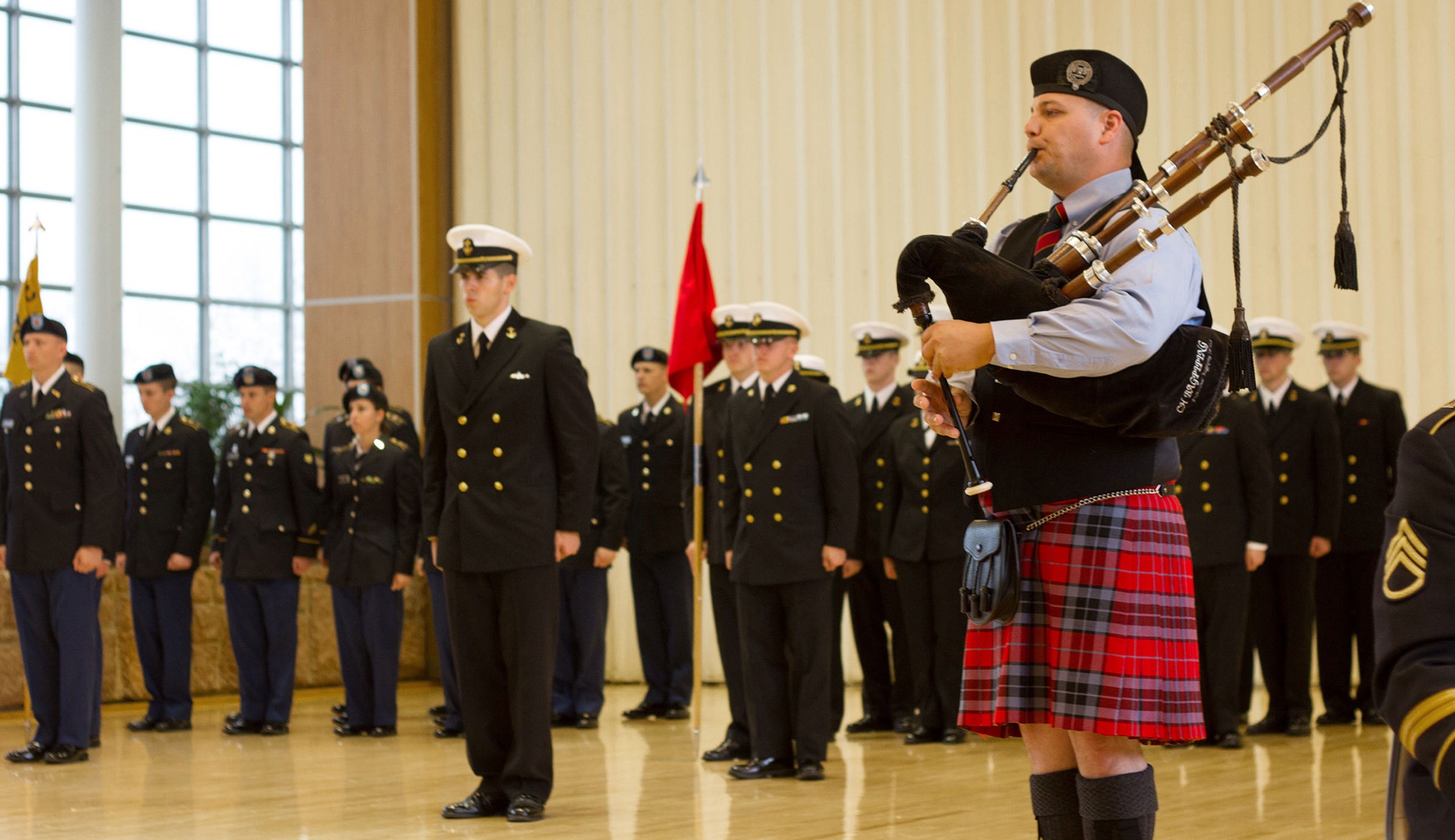 Nov. 7, 2013 – The University of Utah will honor 11 Utah veterans, including the second female admiral, at its 16th annual Veterans Day Commemoration Ceremony, Monday, Nov. 11, 2013, in the ballroom in the A. Ray Olpin Union Building. The tribute includes a panel discussion, a 21-cannon salute, an awards ceremony and a concert.

The panel discussion, “Women in Combat Arms,” begins at 8:45 a.m. and focuses on changes in the military related to women serving in combat positions.

“This is a perfect discussion to have as the U.S. is in the process of integrating women into the ranks of all branches of the military, including combat positions.” said, Tammy McCreery, former captain in the Army who will moderate the discussion. “Our panelists have all seen combat and bring a personal perspective on the current segregated force and where the military is headed regarding implementing gender neutrality by 2016.”

The awards ceremony beings at 11 a.m., symbolic of the history of Veterans Day, which celebrates the armistice that ended World War I on the 11th hour of the 11th day of the 11th month. Nominations came from across the state, and the 11 veterans chosen to be honored will receive a commemorative medallion onstage at the ceremony. An additional award, the Student Veteran of the Year, will be awarded to a current U student. The ceremony will conclude with a 21-cannon salute at noon.

All events are free and open to the public.

For a complete list of honors and events, visit www.veteransday.utah.edu.

The following veterans will be honored:

Maxine Conder served in the Navy Nurse Corps for 28 years. She served on a naval hospital ship during the Korean War before she was sent to Guam, where she lived and worked in Quonset huts. She recalls pounding on the walls before entering patient rooms to scare off rats. On Guam, she was trained to care for polio patients. This experience proved beneficial as she dealt with the last big polio epidemic in the U.S. upon returning stateside to her duty station in Massachusetts. In 1975, she became the second woman promoted to admiral and was in charge of the Navy Nurse Corps, which consisted of 2,600 Navy nurses worldwide.

Ray Matheny enlisted in the Army Air Corps when he was just 17 years old. On his ninth aerial combat mission, the right wing of the plane was blown off, and the plane went into a deadly flat spin. Before he could finish connecting his parachute, the plane blew up and he was ejected. He regained consciousness while falling and was able to deploy his parachute before landing on a frozen canal. He was soon captured and taken to a German prisoner of war camp in Austria that held nearly 30,000 prisoners. He was finally freed about a year later. Matheny was called back to duty during the Korean War and served more than three years in Japan investigating aircraft accidents. Upon leaving the Air Force, he earned a doctorate in anthropology and taught at Brigham Young University for 40 years.

In 1968, Lawrence Weist and other soldiers from his battalion were flying to Trang Bang, Vietnam, to relive another group of soldiers who had been ambushed. When his helicopter was 100 feet above the landing zone, it was hit by ground fire and crashed tail first. He was knocked unconscious from a serious head would, thrown from the aircraft and presumed dead. After the firefight ended and bodies were being loaded onto the helicopters, a medic realized he was still alive. Weist was flown to a hospital and discharged three days later. From December 1967 to March 1969, he always kept track of the casualty lists published in the “Starts and Stripes” each Thursday. He noted that 40 percent of the recruits in his Infantry Advanced Individual Training Company at Fort Pol were killed in Vietnam.

Spencer Felt always wanted to fly. After graduating from East High School and completing a year at the University of Utah, he jumped at the opportunity for flight training as an Army aviation cadet in 1943. While on a bombing mission, their plane began having problems, and the engines went out one by one. Eventually the crew was left with no choice but to “bail out.” Due to a series of coincidences, the crew was reunited within two days by members of the Polish underground who directed them to safe places in the mountains for five weeks. Under Russian escort, Felt and his crew were trucked to a border town in Poland, where they took a train to Russia. Then they joined many liberated American prisoners of war on a ship that crossed the Black and Mediterranean seas to Egypt. They went on to Naples, Italy, and a few days later, Felt finally boarded a ship set to return to the United States. He docked in Boston, Mass, April 9, 1945.

Forrest Allinder was in his freshman year at the California Institute of Technology studying chemistry when he enlisted in the Army. In 1947, his battalion had to cross the rain- and snow-swollen Sauer River in Germany. Because the river was flooded, their overloaded boats capsized and sank while under intense artillery attack. Allinder worked to save many of the injured soldiers from the freezing water. The remaining soldiers found refuge in a ravine by the river. His regiment covered about 1,000 yards, the furthest for any group that day, but it cost them many lives. “It was so brutal, so dirty – there is no way to communicate it,” he said. Allinder eventually returned home and completed a master’s degree in chemical engineering, spending most of his career in the petrochemical business.

After his Korean enlistment, Tommy Hollingsworth heard about the Army Special Forces and reenlisted in 1956. In addition to Special Forces training, he was given advanced training in Laotian and Thai languages, demolitions, communications, sky diving, Navy underwater demolitions, operations intelligence, jungle mountain survival, parachuting and sky diving with scuba gear. He carried out classified operations in southeast Asia as part of Operation White Star. Upon returning to civilian life in the U.S., he became concerned about American views toward the Vietnam War, so he began a public speaking career and published a book, “Behind the Scenes in Vietnam.”

William Hansen served in Vietnam as a captain. He recalls Dec. 9, 1968, as the worst day of his life. He and his regiment were called to help friendly forces in a fierce fire fight 25 miles away. On their way, the troop was attacked by an enemy force. Hansen’s Silver Star citation says he quickly and professionally reorganized his force and led the frontal assault against the well-concealed, hostile fortifications and successfully defeated them. After reaching the friendly group, his troop again met an intense barrage of antitank grenade fire. Hansen exposed himself to enemy fire while making the difficult decisions coordinating precise artillery and air strikes until the hostile force withdrew. After Vietnam, Hansen served as an assistant professor of military science at the U.

Stephen Featherstone enlisted in the Army in 1955 at the age of 25. He served in Vietnam from 1965 to 1966 and again from 1971 to 1972. His assignments included leading helicopter missions to protect and resupply the encircled Marine base at KheSanh, leading night missions to rescue Army and Marine units from jungle and mountaintop positions that were about to be overrun by the enemy. Although his helicopter was often hit by ground fire, including rounds that went through the Plexiglas widescreen of his cockpit, missing him by inches, Featherstone is amazed he was never seriously wounded. In 1976, after serving his country for more than 20 years, Lt. Col. Featherstone retired from the Army.

Edward Kay arrived at the front lines in Korea on June 1, 1950, as a rifleman. In just four months, he was promoted through the noncommissioned officer ranks to master sergeant. He served in two of the bloodiest battles of the war – Bloody Ridge and Heartbreak Ridge. The back-to-back battles lasted a total of about two months. Bloody Ridge saw a total of 17,700 casualties. After 30 days of nonstop combat, the battle of Heartbreak Ridge came to a close, and Kay’s battalion incurred 850 casualties, including 27 officers. Kay is proud he served in the Army. “There is something about the war that stays with you more than 60 years later,” he says. “I served with some of the best guys I have ever met in my life.”

James Slade was drafted into the military from Murray, Utah, in 1968. He served nearly two years on active duty during the Vietnam War. Slade recalls a particularly difficult event that occurred while he was on a mission to explore enemy territory. He and his team received a call to help a friendly village that was going to be attacked by a Viet Cong unit. Because of the harsh jungle terrain, it took a considerable amount of time to travel to the village. When the soldiers arrived, they found the buildings had already been destroyed and most of the people executed. After he retired from the military, he became the state coordinator for military funerals, and he’s currently the military outreach coordinator for the Employer Support of the Guard and Reserve.

Elton Taylor spent nearly 22 years in the military serving in World War II, Korea and Vietnam. He first joined the Marines in Nov. 1943. He landed at Peleliu, Palau Island, in 1944; his unit was involved in the Battle of Okinawa from April to August 1945 and was then sent to northern China from September 1945 to February 1946. He was honorably discharged in March 1946. After returning home to Salina, Utah, and working for two years at the Premium Oil Company as a mechanic, he joined the Army, where he served in Korea and Vietnam. After a long military career, he retired in 1967.