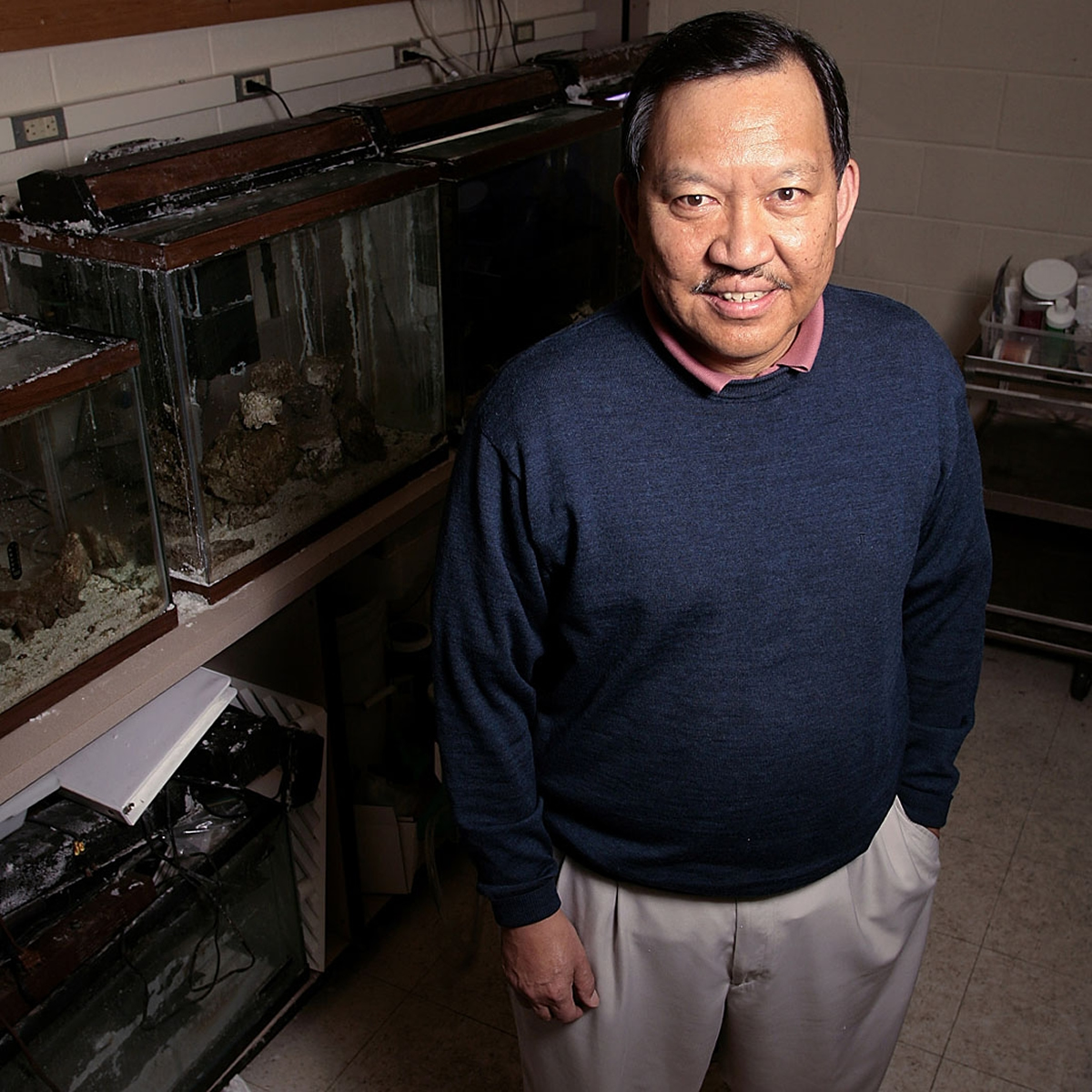 April 5, 2006 — Baldomero “Toto” Olivera, a University of Utah biologist who has spent his career developing new medicines from the toxins of deadly cone snails, has won a four-year, $1 million award as one of 20 new “Million-Dollar Professors” named by the prestigious Howard Hughes Medical Institute (HHMI).

The award is different from HHMI’s program of designating researchers as HHMI investigators and paying their salaries. Instead, the Million-Dollar Professor program supports professors in their efforts to “ignite the scientific spark in a new generation of students” through teaching and mentoring.

Olivera plans to use the money to teach children and undergraduates from his native Philippines, Hawaii and U.S. Pacific territories about biodiversity in their environment, and also to implement a neuroscience program for undergraduates at the University of Utah.

(2) HHMI’s profile of Olivera, his research and his plans for the $1 million.

News media wishing to interview Olivera may call him or his assistant, Carol Bergstrom, at (801) 581-8370 or via email at olivera@biology.utah.edu or bergstrom@biology.utah.edu

A University of Utah web page on Olivera is at: www.biology.utah.edu/faculty2.php?inum=7

In addition, Cognetix, a spinoff company based on Olivera’s research, has details of its works developing medicines from cone snail toxins: www.cognetix.com

CHEVY CHASE, Maryland, April 5, 2006-Teaching often takes a back seat to research at leading American universities. Determined to change that fact, the Howard Hughes Medical Institute (HHMI) combed the country for leading research scientists who, through their teaching and mentoring, are striving to ignite the scientific spark in a new generation of students. Now 20 of the best will receive $1 million each from HHMI to put their innovative ideas into action as HHMI professors at 18 research universities across the country.

The Institute does not tell the HHMI professors what to do or how to approach science education. Rather, HHMI provides them with the resources to turn their own considerable creativity loose in their undergraduate classrooms. Some will design programs to attract more women and minorities to science. Others will turn large introductory science courses or classes for non-science majors into engaging, hands-on learning experiences that challenge students to think like working scientists.

“The scientists whom we have selected are true pioneers-not only in their research, but in their creative approaches and dedication to teaching,” said Thomas R. Cech, HHMI president. “We are hopeful that their educational experiments will energize undergraduate science education throughout the nation.”

The Institute awarded $20 million to the first group of HHMI professors in 2002 to bring the excitement of scientific discovery to the undergraduate classroom.

The experiment worked so well that neurobiologist and HHMI professor Darcy Kelley convinced Columbia University to require every entering freshman to take a course on hot topics in science. Through Utpal Bannerjee’s HHMI program at the University of California, Los Angeles, 138 undergraduates were co-authors of a published a peer-reviewed article in a top scientific journal. At the University of Pittsburgh, HHMI professor Graham Hatfull’s undergraduates mentored curious high school students as they unearthed and analyzed more than 30 never-before-seen bacteriophages from yards and barnyards. And Isiah Warner, an award-winning chemist and HHMI professor at Louisiana State University, developed a “mentoring ladder,” a hierarchical model for integrating research, education, and peer mentoring, with a special emphasis on underrepresented minority students.

“The HHMI professors are as excited about teaching as they are about research, and it definitely rubs off on their students,” said Peter Bruns, HHMI vice president for grants and special programs. “Undergraduates need a window into the excitement and fulfillment that scientists get from science. They need to discover that science is a way of learning and knowing, involving critical thinking, problem solving, and asking answerable questions. In this program we are supporting faculty to use research grade innovation to advance science education.”

The Institute will give smaller renewal grants to eight of the original 20 professors to help them find ways to sustain the parts of their programs that worked best and to disseminate them to the broader community of teachers.

Last year, HHMI invited 100 research universities with outstanding track records in sending graduates to medical or graduate school to nominate up to two faculty members to compete for the HHMI professorships. A panel of distinguished research scientists and educators, including some HHMI professors selected in the last competition, reviewed 150 applications. They evaluated the potential impact of the proposals on undergraduate science education, as well as the quality of the applicants” research and educational accomplishments, and the potential for the proposed programs to serve as models elsewhere.

Some of the professors’ plans include:

— Winston Anderson, a professor of biology at historically African-American Howard University in Washington, D.C., wants to give his undergraduates “a competitive edge” for entering biomedical science careers. He plans intensive mentoring and a summer exchange program that will take students to African countries such as Ghana, Ethiopia, Mali, or Nigeria to study tropical diseases and ethnopharmacology-the use of indigenous plants for medicinal purposes.

— Susan Wessler, a Regents professor of plant biology at the University of Georgia, intends to respond to the proponents of “intelligent design” by guiding her undergraduates through bioinformatic and genetic analyses of transposable elements in plant genomes, so they can witness evolution in action. Transposable elements, the focus of Wessler’s research, are pieces of DNA that make copies of themselves that are inserted throughout the genomes of plants and animals, at times promoting evolutionary change.

— Scott Strobel, a Yale University biophysicist and biochemist, will take undergraduates “bio-prospecting” for promising natural products in the world’s rain forests. The students will then purify and analyze the compounds they collected and test them for potentially beneficial activity.

The new HHMI professors are:

The Howard Hughes Medical Institute is dedicated to discovering and disseminating new knowledge in the basic life sciences. HHMI grounds its research programs on the conviction that scientists of exceptional talent and imagination will make fundamental contributions of lasting scientific value and benefit to mankind when given the resources, time, and freedom to pursue challenging questions. The Institute prizes intellectual daring and seeks to preserve the autonomy of its scientists as they pursue their research.

A nonprofit medical research organization, HHMI was established in 1953 by the aviator-industrialist. The Institute, headquartered in Chevy Chase, Maryland, is one of the largest philanthropies in the world with an endowment of $14.8 billion at the close of its 2005 fiscal year. HHMI spent $483 million in support of biomedical research and $80 million for support of a variety of science education and other grants programs in fiscal 2005.

Growing up in the Philippines, Baldomero “Toto” Olivera recalls that cone snails were sold by the kilo in local seafood markets. As a child, however, Olivera was blissfully unaware of the impact that the predatory cone snail, Conus magus, would have on his life’s work. Nor could he have imagined that the creatures would even enable his lab to develop a drug to bring relief to people in chronic pain.

Now a distinguished professor of biology and neuroscientist at the University of Utah in Salt Lake City, Olivera was nicknamed Toto by a cousin who could not pronounce Totoy, a pet name sometimes given to Filipino boys. As an HHMI professor, he plans to take the story of the cone snail back to the children of the Philippines and the nearby Pacific islands the snails inhabit. “These snails have so much potential, and the children don’t know anything about their biology,” he explained.

Olivera will teach children and undergraduates from the Philippines, Hawaii, and U.S. territories in the Pacific about the richness of their surroundings through a project he calls the Biodiversity-Biomedical Links Initiative. “My idea is to concentrate on the biodiversity that’s at their feet,” he said. His goal is to interest young students by educating them about scientific principles that can be observed in organisms that they see every day.

And Olivera is well aware now that the fish-hunting cone snail, with its intriguing eating habits, is a good place to start. The snail harpoons fish with a radular tooth, a hypodermic needle-like structure that injects a paralyzing venom made up of 100 different components. Once the fish is harpooned and paralyzed, the snail reels it in and eats it.

By studying the complex neurotoxic venom made by the snails, Olivera and members of his lab have identified several drug candidates, as well as gained a better understanding of how ion channels work. Michael McIntosh, now a fellow researcher in psychiatry at the University of Utah, was an undergraduate in Olivera’s lab when he discovered a cone snail toxin whose synthetic form is now used to treat pain effectively in patients who have become tolerant to morphine.

Olivera believes that the future of neuroscience depends on collaboration across disciplines. So he also plans to work to increase the number of students fluent in neuroscience by implementing an Interdisciplinary Undergraduate Neuroscience Program at the University of Utah. Students whose majors range from math to electrical engineering will be offered the opportunity to minor in neuroscience. “If we are to accelerate the pace of scientific progress, we need people looking at the same problems from different intellectual viewpoints,” he said.