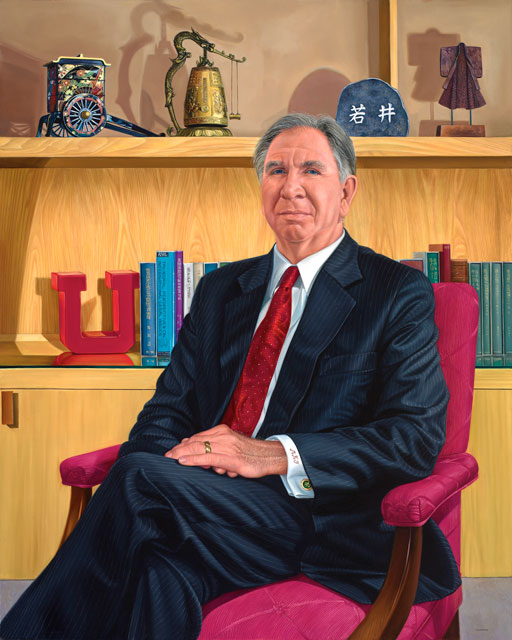 June 4, 2008-For decades, presidents at the University of Utah have been immortalized in oil paint. The tradition of unveiling the presidential portrait during the early part of their tenure continues with the current head of the university, Michael K. Young. The formal unveiling took place on Monday, June 9, 2008 at 11:30 a.m. in the John R. Park Building.

Michael K. Young is the fourteenth president of the University of Utah. His portrait was commissioned by local artist Tom Hoffman, an adjunct professor at the University of Utah. “Both the president and his wife Suzan were so open and gracious that I found I was really inspired to make the painting for them,” said Hoffman. “I wanted to personalize the portrait, so I chose items for the background that meant something to them. The president’s background is in Japanese and international law, so with their help we chose specific objects that not only represented this but were meaningful to them.”

The Past Presidents Portrait collection is more than an exhibition-it is the University’s legacy of leadership. Many artists have painted presidential portraits throughout the decades, traditionally by art professors at the university. Some date back to the late 1800’s when the first portraits were painted. The collection underwent a conservation and restoration in 1981.

More portraits were painted by the late Utah portrait painter Alvin Gittins than by any other artist. He taught in the Department of Art and Art History from 1947 to 1981. Gittins held the position of University portraitist-in-residence for almost 30 years, producing 90 commissioned portraits-of presidents, physicians, deans, scientists, researchers, artists, and other prominent personalities-that adorn the walls of departments and colleges across the campus.