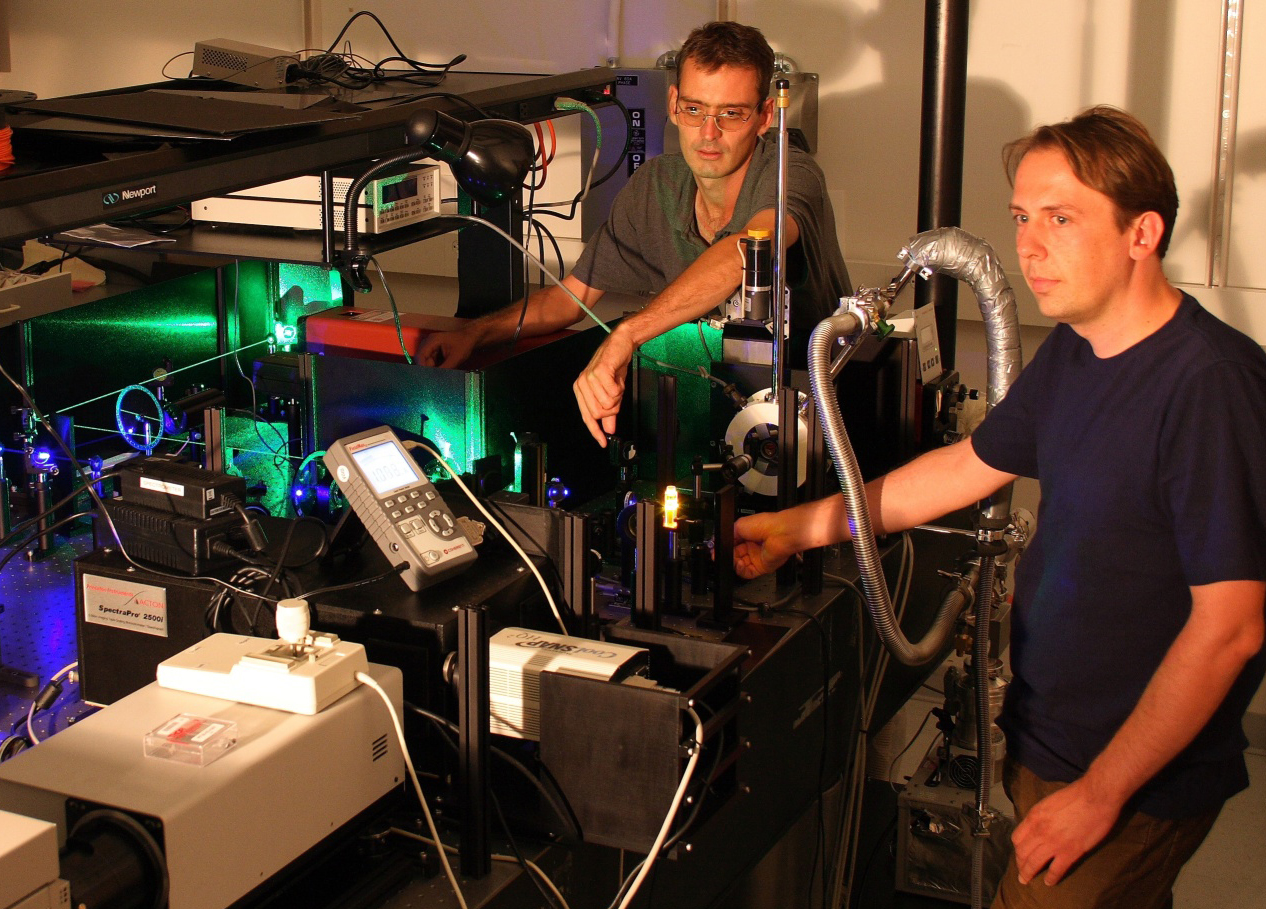 Aug. 17, 2008 – University of Utah physicists successfully controlled an electrical current using the “spin” within electrons – a step toward building an organic “spin transistor”: a plastic semiconductor switch for future ultrafast computers and electronics.

The study also suggests it will be more difficult than thought to make highly efficient light-emitting diodes (LEDs) using organic materials. The findings hint such LEDs would convert no more than 25 percent of electricity into light rather than heat, contrary to earlier estimates of up to 63 percent.

Organic semiconductor or “plastic” LEDs are much cheaper and easier to fabricate than existing inorganic LEDs now used in traffic signals, some building lighting and as indicator lights on computers, TVs, cell phones, DVD players, modems, game consoles and other electronics.

The study – published online Sunday, Aug. 17 in the journal Nature Materials – was led by Christoph Boehme and John Lupton, assistant and associate professors of physics, respectively, at the University of Utah.

The promising news about spin transistors and sobering news about organic LEDs (OLEDs) both stem from an experiment that merged organic semiconductor electronics and spin electronics, or spintronics, which is part of quantum mechanics – the branch of physics that describes the behavior of molecules, atoms and subatomic particles.

“This is the first time anyone has done really fundamental, hands-on quantum mechanics with an organic LED,” Lupton says. “This is tough stuff.”

The Spin on Spintronics

An atom includes a nucleus of protons and neutrons, and a shell of orbiting electrons. In addition to an electrical charge, some nuclei and all electrons have a property known as “spin,” which is like a particle’s intrinsic angular momentum. An electron’s spin often is described as a bar magnet that points up or down.

Computers and other electronics work because negatively charged electrons flow as electrical current. Computerized information is reduced by transistors to a binary code of ones or zeroes represented by the presence or absence of electrons in semiconductors.

Researchers also hope to develop even smaller, faster computers by using electrons’ spin as well as their electrical charge to store and transmit information; the up and down spins of electrons also can represent ones and zeroes in computing.

Lupton says that physicists already have shown that spins can carry information in nonorganic materials. In 2004, other Utah physicists reported building the first organic “spin valve” to control electrical current.

In the new study, the researchers showed that information can be carried by spins in an organic polymer, and that a spin transistor is possible because “we can convert the spin information into a current, and manipulate it and change it,” says Lupton. “We are manipulating this information and reading it out again. We are writing it and reading it.”

Boehme says spin transistors and other spin electronics could make possible much smaller computer chips, and computers that are orders of magnitude faster than today’s.

“Even the smallest transistor today consists of hundreds of thousands of atoms,” says Boehme. “The ultimate goal of miniaturization is to implement electronics on the scale of atoms and electrons.”

LED semiconductors using compounds of gallium, arsenic, indium and other inorganic materials have made their way into traffic signals, vehicle brake lights and home electronics in recent years. Some inorganic LEDs can convert 47 percent to 64 percent of incoming electricity into white light rather than waste heat. But efforts to replace incandescent and even compact fluorescent light bulbs with LEDs have been hindered by costs exceeding $100 per LED bulb.

LEDs made of electrically conducting organic materials are cheaper and easier to manufacture, but their efficiency long was thought to have an upper limit of 25 percent.

A 2001 Nature paper by other University of Utah physicists suggested it might be possible to make organic LEDs that converted 41 percent to 63 percent of incoming electricity into light. But the new study suggests 25 percent efficiency may be correct – at least for the organic polymer studied – pure MEH-PPV – and possibly for others.

“Doping” organic semiconductors with other chemicals someday might lead to organic LED efficiencies above 25 percent, but Boehme says he is skeptical.

Even if organic LEDs are less efficient and have a shorter lifespan than inorganic LEDs, they still may be more economical because their cost is so much less, he adds.

Boehme says organic LEDs’ greatest promise is not in lighting, but to replace the LCD (liquid crystal display) technology in modern televisions and computer screens. Organic LEDs will be much cheaper, can be made on flexible materials, have a wider viewing angle and color range and will be more energy efficient than LCDs, he says.

Flip-Flopping on Flipping and Flopping

LEDs produce light when incoming negative and positive electrical charges – electrons and “holes” – combine. The spins of each electron-hole pair can combine in four quantum states, which in turn can combine in two different ways to form:

Lupton, Boehme used a plastic semiconductor LED in the form of a piece of the polymer MEH-PPV measuring about one-twelfth-inch long by one-eighth-inch wide. It was mounted on a piece of glass about 2 inches long and one-sixth inch wide.

Electrodes were attached, and the apparatus was bombarded by a microwave pulse for a few nanoseconds (billionths of a second) to turn and align the spins of electron-hole pairs in the LED. The electrodes also were used to measure the strength of the electrical current from the device.

“Just like a mass on a spring, the pulse produces an oscillation of the spins [of singlets and triplets] in the organic LED,” Lupton says. “That was unexpected.”

The 2001 study indicated that some triplets randomly, unpredictably “lose their memory,” changing spin orientation or “flipping” to become singlets, boosting possible organic LED efficiencies as high as 63 percent. The new study, however, found triplets “flip” into singlets too slowly to produce much light, Boehme says.

Instead, the study showed electron spin quantum states can rhythmically and predictably oscillate or “flop” between triplets and singlets and back again for one-half microsecond (millionths of a second) when excited by microwaves.

Because the combination of electrons and holes that produces light happens faster than that, “flipping likely isn’t involved in producing light” from the LED, and thus it will be difficult to make organic LEDs with efficiencies above 25 percent, Lupton says.