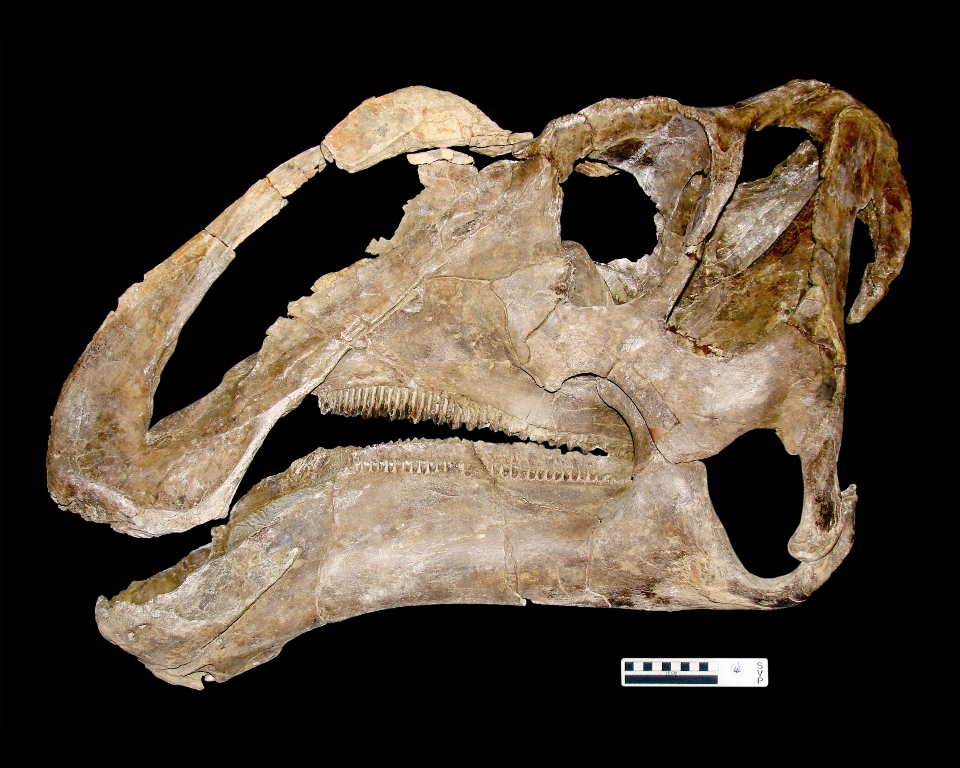 October 3, 2007 – The newest dinosaur species to emerge from Grand Staircase-Escalante National Monument had some serious bite, according to researchers from the Utah Museum of Natural History at the University of Utah.

“It was one of the most robust duck-billed dinosaurs ever,” said museum paleontologist Terry Gates, who is also with the U.’s Department of Geology and Geophysics. “It was a monster.”

Researchers from the Utah museum, the national monument and California’s Raymond M. Alf Museum of Paleontology unearthed fossils of this ancient plant-eater from the rocks of the Kaiparowits Formation. Researchers announced the name of the creature – Gryposaurus monumentensis. (Gryposaurus means “hook-beaked lizard” and monumentensis honors the monument where the fossils were found.)

The first description of the duck-billed dinosaur – which dates to the Late Cretaceous Period 75 million years ago – appears in the Oct. 3 issue of the Zoological Journal of the Linnean Society.

Gates, lead author on the study, explained that this creature could have eaten just about any vegetation it stumbled across. “With its robust jaws, no plant stood a chance against G. monumentensis,” he said.

Scott Sampson, another paleontologist with the Utah museum who was involved with the project, emphasized the massively-built skull and skeleton, referring to the animal as the “Arnold Schwarzenegger of duck-billed dinosaurs.”

In 2002, a team from the Alf Museum, in Claremont, Calif., located at the Webb School, discovered the site that contained the skull used to describe the new creature. Every summer, the California institution, the only nationally-accredited paleontology museum on a high school campus, gives Webb students and volunteers the chance to participate in scientific field work.

The California team was working a stretch of Grand Staircase that Utah researchers had not examined. Duncan Everhart, a Pennsylvania furniture maker, is credited with finding the skull.

Don Lofgren, curator of the Alf Museum, said the team received permission from the monument to dig deeper in 2003.

“We determined it was a skull sitting upside down with the jaw on top,” he said.

Once Gates went out to take a look in 2004, he quickly realized the California team had a potentially-important find. The Alf Museum gave the Utah researchers permission to prepare and study the skull.

Titus noted the discovery of this new species was a team effort involving the Alf Museum, the Utah Museum of Natural History and the national monument.

“The cooperative effort put into its collection and research has truly been a model for scientific investigation on public lands,” he said.

It wasn’t until Utah researchers began working on the skull in 2005 that the full significance of the find began to emerge, Gates said.

The well-preserved skull was initially missing key pieces from the nose region. Fortunately, the California museum had collected a box full of eroded bones, including bits of the nose bone, which was critical for identifying the creature.

“I knew immediately that we had some species of Gryposaurus,” Gates said.

The creature’s large number of teeth embedded in the thick skull is among the features that made G. monumentensis, as well as other closely related duck-billed dinosaurs, such a successful herbivore.

At any given time, the dinosaur had over 300 teeth available to slice up plant material. Inside the jaw bone, there were numerous replacement teeth waiting, meaning that at any moment, this Gryposaur may have carried more than 800 teeth.

“IIt was capable of eating most any plant it wanted to,” Gates said. “Although much more evidence is needed before we can hypothesize on its dietary preferences.”

While the diet is unknown, given the considerable size of the creature, the massive teeth and jaws are thought to have been used to slice up large amounts of tough, fibrous plant material.

The teeth may hold important clues the dinosaur’s eating habits. The Utah museum plans to study the composition of the dinosaur teeth, which when compared to other plant-eating dinosaurs from the Kaiparowits Formation, will help researchers decipher differences in diet.

G. monumentensis is one of several new dinosaur species found in Grand Staircase, including: a Velociraptor-like carnivore named Hagryphus, a tyrannosaur, and several kinds of horned dinosaurs. In all, more than a dozen kinds of dinosaurs have been recovered from these badlands, and most represent species that are new to science.

“This is a brand new and extremely important window into the world of dinosaurs,” said Sampson.

Under ideal circumstances, paleontologists will find the skull and other key bones at the same site. In this case, the head was the only thing they managed to find from where the Alf team searched.

Researchers believe the head of this particular Gryposaur likely rolled into a bend of a river, where it was partly buried. The right half of the head remained exposed to the river current, dislodging several bones before this side was buried as well.

In other parts of the monument, Utah researchers have excavated bones believed to be from the same species. Gates estimates G. monumentensis may have grown up to 30 feet long as an adult.

“As each new find such as this new Gryposaur is made,” Titus said, “it is placed into the greater context of an entire ecosystem that has remained lost for eons, and is only now coming under scientific scrutiny.”

Around 75 million years ago, southern Utah differed dramatically from today’s arid desert and redrock country. During much of the Late Cretaceous, a shallow sea split North America down the middle, dividing the continent into eastern and western landmasses.

In what Sampson terms “West America,” G. monumentensis and its fellow dinosaurs lived in a narrow strip of land sandwiched between the seaway to the east and rising mountains to the west. Due in large part to the presence of the seaway, the climate was moist and humid.

Thanks to more than 100 years of fossil collection, scientists know more about the Cretaceous dinosaurs from North American than they do from any other time or continent on Earth, Sampson noted.

While G. monumentensis gulped down its greens and tried to avoid predatory tyrannosaurs down in Utah, closely related but different species of duck-billed dinosaurs were doing the same thing farther north, in places like Montana and Alberta, Canada.

Earlier explanations of dinosaurs undertaking long distance migrations have gone out the window. “Now we have to figure out how so many different kinds of giants managed to coexist in such small areas,” said Sampson. “We’re just beginning to unravel this story.

Bones from G. monumentensis are on display at Big Water Visitor Center in Grand Staircase-Escalante National Monument, and for a short time at the Utah Museum of Natural History before returning to the Alf Museum.