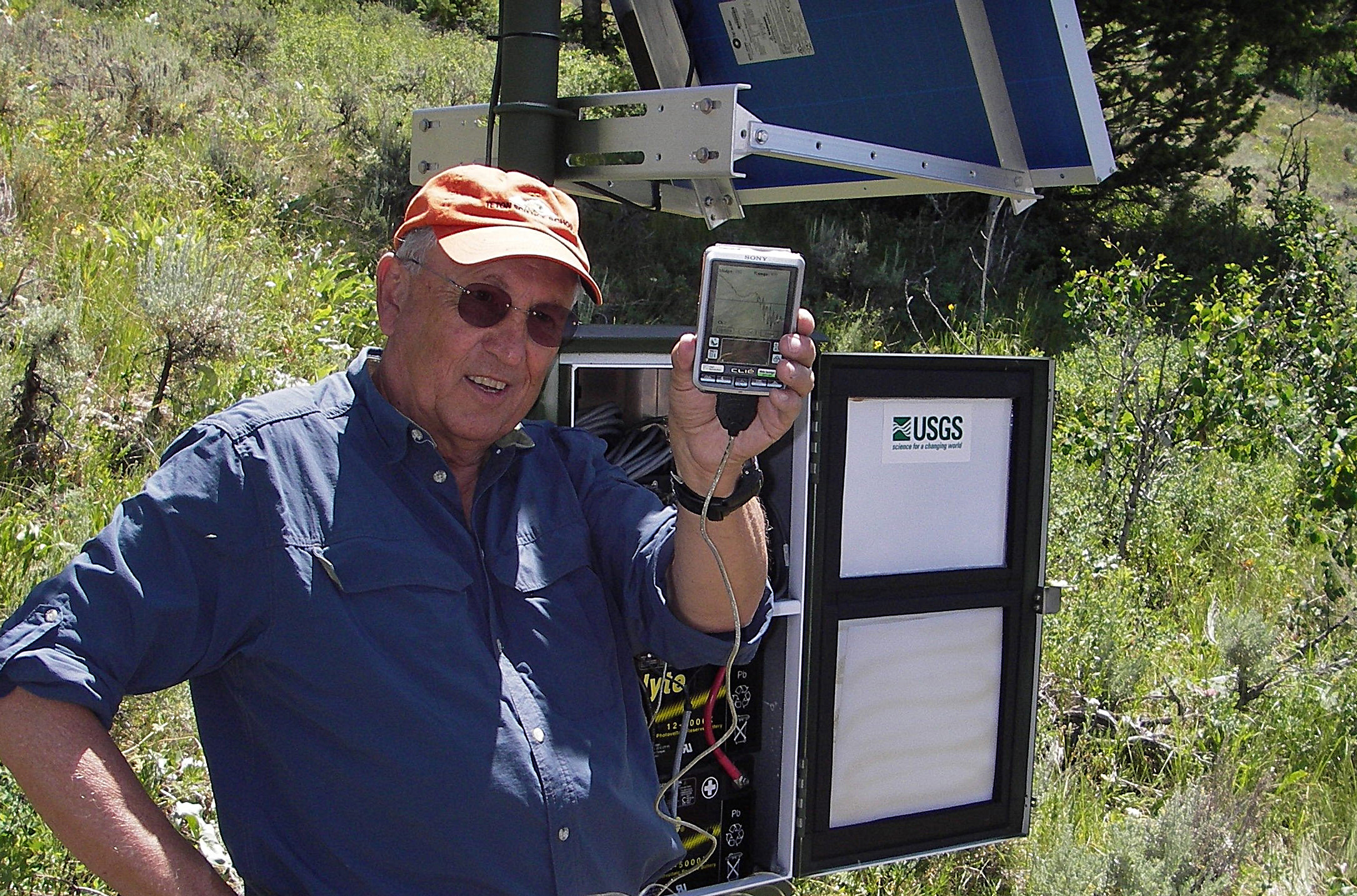 Some of Earth’s most powerful geophysical forces have produced the magnificent scenery of Yellowstone National Park, its world-renowned geysers, the largest volcanic field in North America and frequent earthquakes.

The energy responsible for creating these geologic features comes from a 50-mile-wide “hotspot” or “mantle plume” of molten rock that originates at least 400 miles below the Idaho-Montana border, and then angles eastward and rises until it is only 30 miles beneath Yellowstone. There, the plume hits cooler rock and spreads out to a width of 300 miles.

The buoyancy of the hot plume lifts Yellowstone and the surrounding region into a 500-mile-wide “topographic swell” that pushes the ground well above 7,000 feet elevation, or about 1,600 feet higher than it would be without the underground plume.

The volcanic plume also fuels a shallow “magma chamber” of hot and partly molten rock that extends from about five miles beneath Yellowstone to a depth of at least 10 miles. During the past 2 million years, this and earlier magma reservoirs produced three supervolcano eruptions that exploded thousands of cubic miles of volcanic debris, destroyed mountains and covered half of North America with volcanic ash.

Robert B. Smith, a research professor of geophysics, is the University of Utah’s coordinating scientist for the Yellowstone Volcano Observatory. In that role, he supervises operation of networks that monitor earthquakes and ground movements, such as uplift of the Yellowstone caldera, or giant volcanic crater.

Recent University of Utah studies by Smith and his colleagues show that the crustal magma chamber is 30 percent larger than earlier determined, due to recharge by hot and molten rock starting in mid-2004.

The crustal magma body continues to fuel Yellowstone’s geysers and power a restless caldera, which, like others on Earth, huffs upward and puffs downward for millennia without erupting – often by many feet over the decades. The caldera floor rose 40 inches during 1923-1984, fell 8 inches during 1985-1995, rose a few inches maximum during 1995-2000, mostly sank about an inch during 2000-2003, then mostly rose more than 3 inches since mid-2004 – three times faster than its historic rate of uplift.

Movement of magma and hydrothermal fluids cause these ups and downs. Studies have revealed Yellowstone’s hydrothermal systems release 100 watts per 36 square feet – in other words, a square of ground measuring 6 feet on a side emits enough heat to power a 100 watt light bulb. That’s more than 20,000 times the heat emitted by the average rock in North America.

During late December 2008 and early January 2009, Yellowstone experienced its second-largest earthquake swarm in recorded history, and it was well-documented by the University of Utah real-time seismic network. The sequence consisted of about 1,000 earthquakes, including a dozen quakes of magnitude 3.0 or higher, and one as large as 3.9 on the Richter scale.

Smith has conducted research in the Yellowstone-Teton region for almost 50 years, beginning as a student studying the magnitude-7.5 Hebgen Lake, Montana, earthquake that killed 28 people in 1959. His team of students and postdoctoral researchers has focused on studies of the geologic evolution of Yellowstone, its volcanism, earthquakes and active crustal movements.

He also is principal investigator of a U.S. Geological Survey-funded research project analyzing the earthquake hazard of the Wasatch fault, which runs beneath most of Utah’s major cities.

A fellow of the American Geophysical Union and Geological Society of America, Smith has served on the board of the Seismological Society of America as well as on several federal advisory committees. He has won numerous honors, including the University of Utah Distinguished Scholarly and Creative Research Award and, recently, the National Park Service Intermountain Region’s Natural Resource Research Award.

Smith has supervised 67 graduate students, published more than 170 scientific articles and made hundreds of presentations at scientific meetings. He is senior author with Lee J. Siegel of the popular science book “Windows into the Earth: The Geologic Story of Yellowstone and Grand Teton National Parks,” published by Oxford University Press.