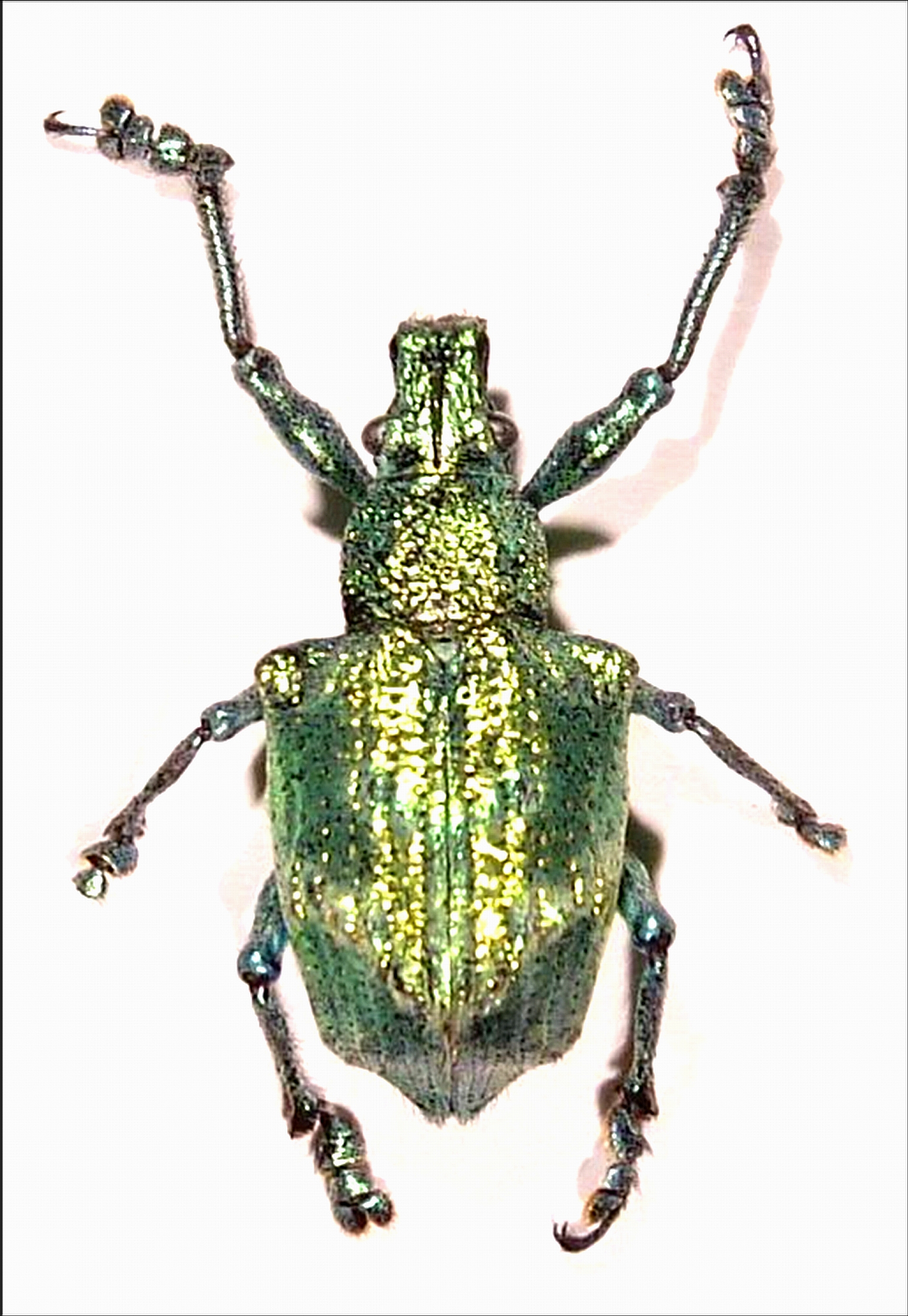 May 20, 2008 – Researchers have been unable to build an ideal “photonic crystal” to manipulate visible light, impeding the dream of ultrafast optical computers. But now, University of Utah chemists have discovered that nature already has designed photonic crystals with the ideal, diamond-like structure: They are found in the shimmering, iridescent green scales of a beetle from Brazil.

“It appears that a simple creature like a beetle provides us with one of the technologically most sought-after structures for the next generation of computing,” says study leader Michael Bartl, an assistant professor of chemistry and adjunct assistant professor of physics at the University of Utah. “Nature has simple ways of making structures and materials that are still unobtainable with our million-dollar instruments and engineering strategies.”

The study by Bartl, University of Utah chemistry doctoral student Jeremy Galusha and colleagues is set to be published later this week in the journal Physical Review E.

The beetle is an inch-long weevil named Lamprocyphus augustus. The discovery of its scales’ crystal structure represents the first time scientists have been able to work with a material with the ideal or “champion” architecture for a photonic crystal.

“Nature uses very simple strategies to design structures to manipulate light – structures that are beyond the reach of our current abilities,” Galusha says.

Bartl and Galusha now are trying to design a synthetic version of the beetle’s photonic crystals, using scale material as a mold to make the crystals from a transparent semiconductor.

The scales can’t be used in technological devices because they are made of fingernail-like chitin, which is not stable enough for long-term use, is not semiconducting and doesn’t bend light adequately.

Quest for the Ideal or ‘Champion’ Photonic Crystal

Researchers are seeking photonic crystals as they aim to develop optical computers that run on light (photons) instead of electricity (electrons). Right now, light in near-infrared and visible wavelengths can carry data and communications through fiberoptic cables, but the data must be converted from light back to electricity before being processed in a computer.

The goal – still years away – is an ultrahigh-speed computer with optical integrated circuits or chips that run on light instead of electricity.

Researchers also are seeking ideal photonic crystals to amplify light and thus make solar cells more efficient, to capture light that would catalyze chemical reactions, and to generate tiny laser beams that would serve as light sources on optical chips.

“Photonic crystals are a new type of optical materials that manipulate light in non-classic ways,” Bartl says. Some colors of light can pass through a photonic crystal at various speeds, while other wavelengths are reflected as the crystal acts like a mirror.

Bartl says there are many proposals for how light could be manipulated and controlled in new ways by photonic crystals, “however we still lack the proper materials that would allow us to create ideal photonic crystals to manipulate visible light. A material like this doesn’t exist artificially or synthetically.”

When made from an appropriate material, a diamond-like structure would create a large “photonic bandgap,” meaning the crystalline structure prevents the propagation of light of a certain range of wavelengths. Materials with such bandgaps are necessary if researchers are to engineer optical circuits that can manipulate visible light.

On the Path of the Beetle: From BYU to Belgium and Brazil

The new study has its roots in Richey’s science fair project on iridescence in biology when she was a student at Utah’s Springville High School. Gardner’s group at BYU was helping her at the same time Galusha was using an electron microscope there and learned of Richey’s project.

Richey wanted to examine an iridescent beetle, but lacked a complete specimen. So the researchers ordered Brazil’s Lamprocyphus augustus from a Belgian insect dealer.

The beetle’s shiny, sparkling green color is produced by the crystal structure of its scales, not by any pigment, Bartl says. The scales are made of chitin, which forms the external skeleton, or exoskeleton, of most insects and is similar to fingernail material. The scales are affixed to the beetle’s exoskeleton. Each measures 200 microns (millionths of a meter) long by 100 microns wide. A human hair is about 100 microns thick.

Green light – which has a wavelength of about 500 to 550 nanometers, or billionths of a meter – cannot penetrate the scales’ crystal structure, which acts like mirrors to reflect the green light, making the beetle appear iridescent green.

Bartl says the beetle was interesting because it was iridescent regardless of the angle from which it was viewed – unlike most iridescent objects – and because a preliminary electron microscope examination showed its scales did not have the structure typical of artificial photonic crystals.

“The color and structure looked interesting,” Bartl says. “The question was: What was the exact three-dimensional structure that produces these unique optical properties?”

The Utah team’s study is the first to show that “just as atoms are arranged in diamond crystals, so is the chitin structure of beetle scales,” he says.

Galusha determined the 3-D structure of the scales using a scanning electron microscope. He cut a cross section of a scale, and then took an electron microscope image of it. Then he used a focused ion beam – sort of a tiny sandblaster that shoots a beam of gallium ions – to shave off the exposed end of the scale, and then took another image, doing so repeatedly until he had images of 150 cross-sections from the same scale.

Then the researchers “stacked” the images together in a computer, and determined the crystal structure of the scale material: a diamond-like or “champion” architecture,  but with building blocks of chitin and air instead of the carbon atoms in diamond.

Next, Galusha and Bartl used optical studies and theory to predict optical properties of the scales’ structure. The prediction matched reality: green iridescence.

Many iridescent objects appear that way only when viewed at certain angles, but the beetle remains iridescent from any angle. Bartl says the way the beetle does that is an “ingenious engineering strategy” that approximates a technology for controlling the propagation of visible light.

A single beetle scale is not a continuous crystal, but includes some 200 pieces of chitin, each with the diamond-based crystal structure but each oriented a different direction. So each piece reflects a slightly different wavelength or shade of green.

“Each piece is too small to be seen individually by your eye, so what you see is a composite effect,” with the beetle appearing green from any angle, Bartl explains.

Scientists don’t know how the beetle uses its color, but “because it is an unnatural green, it’s likely not for camouflage,” Bartl says. “It could be to attract mates.”

The study was funded by the National Science Foundation, American Chemical Society, the University of Utah and Brigham Young University.