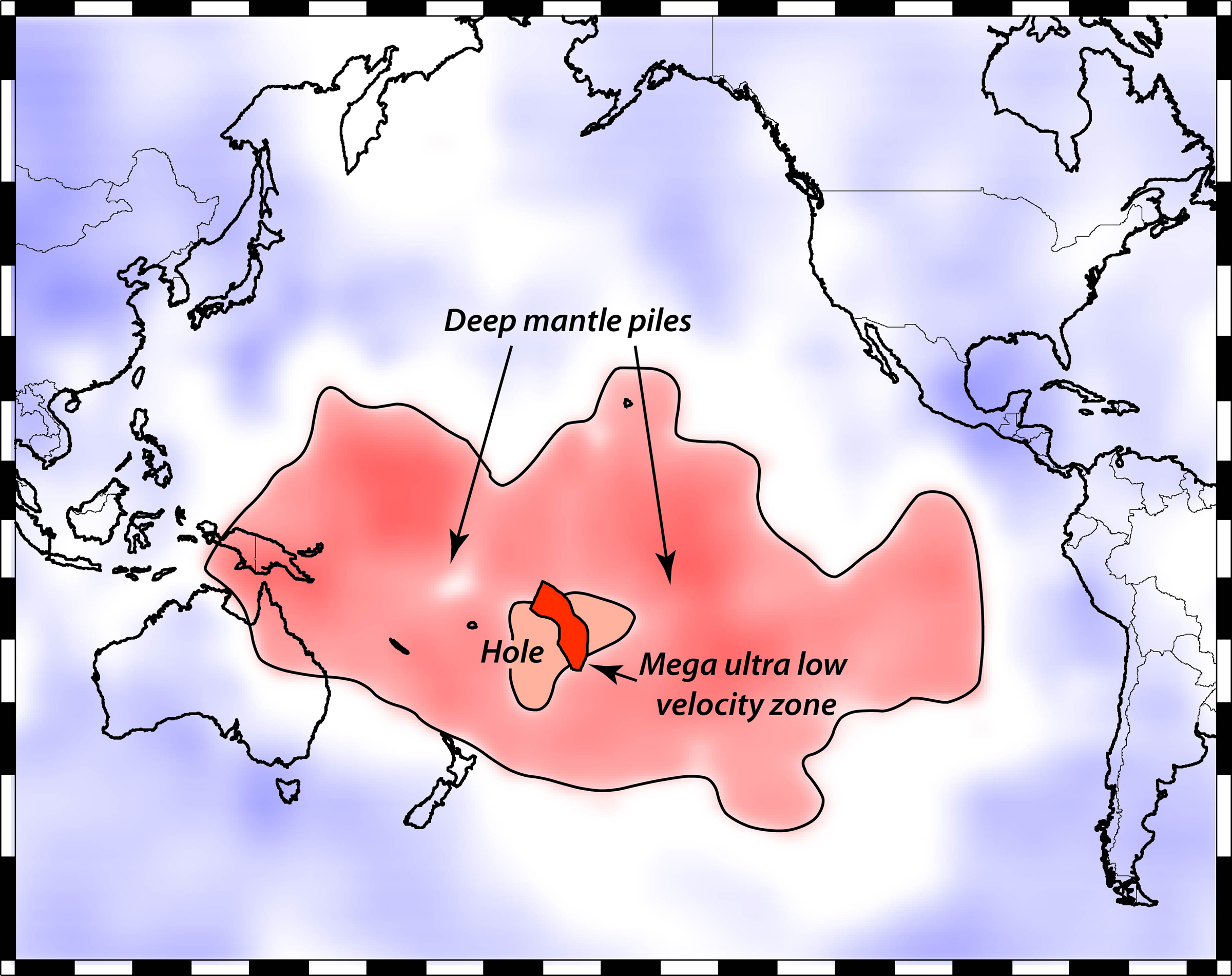 Feb. 7, 2013 – A University of Utah seismologist analyzed seismic waves that bombarded Earth’s core, and believes he got a look at the earliest roots of Earth’s most cataclysmic kind of volcanic eruption. But don’t worry. He says it won’t happen for perhaps 200 million years.

“What we may be detecting is the start of one of these large eruptive events that – if it ever happens – could cause very massive destruction on Earth,” says seismologist Michael Thorne, the study’s principal author and an assistant professor of geology and geophysics at the University of Utah.

But disaster is “not imminent,” he adds, “This is the type of mechanism that may generate massive plume eruptions, but on the timescale of 100 million to 200 million years from now. So don’t cancel your cruises.”

The new study, set for publication this week in the journal Earth and Planetary Science Letters, indicates that two or more continent-sized “piles” of rock are colliding as they move at the bottom of Earth’s thick mantle and atop the thicker core some 1,800 miles beneath the Pacific. That is creating a Florida-sized zone of partly molten rock that may be the root of either of two kinds of massive eruptions far in the future:

— Hotspot plume supervolcano eruptions like those during the past 2 million years at Wyoming’s Yellowstone caldera, which covered North America with volcanic ash.

“These very large, massive eruptions may be tied to some extinction events,” Thorne says. The Ontong eruptions have been blamed for oxygen loss in the oceans and a mass die-off of sea life.

Since the early 1990s, scientists have known of the existence of two continent-sized “thermochemical piles” sitting atop Earth’s core and beneath most of Earth’s volcanic hotspots – one under much of the South Pacific and extending up to 20 degrees north latitude, and the other under volcanically active Africa.

Using the highest-resolution method yet to make seismic images of the core-mantle boundary, Thorne and colleagues found evidence the pile under the Pacific actually is the result of an ongoing collision between two or more piles. Where they are merging is a spongy blob of partly molten rock the size of Florida, Wisconsin or Missouri beneath the volcanically active Samoan hotspot.

The study’s computer simulations “show that when these piles merge together, they may trigger the earliest stages of a massive plume eruption,” Thorne says.

Thorne conducted the new study with Allen McNamara and Edward Garnero of Arizona State University, and Gunnar Jahnke and Heiner Igel of the University of Munich. The National Science Foundation funded the research.

Seismic imaging uses earthquake waves to make images of Earth’s interior somewhat like X-rays make CT scan pictures of the inside of the human body.

The new study assembled the largest set of data ever used to map the lower mantle in the Pacific region by using 4,221seismograms from hundreds of seismometers around the world that detected 51 deep earthquakes originating more than 60 miles under the surface.

Thorne and colleagues looked for secondary earthquake shear waves known as S-waves that travel through much of the Earth, hitting the core, and then convert to primary compressional waves or P-waves as they travel across the top of the core. Then they convert back to S-waves as they re-enter the mantle and then reach seismometers. Thorne says the short bursts of P-wave energy are very sensitive to detecting variations in the rock at the core-mantle boundary.

Thorne performed 200 days of supercomputer simulations at the University of Utah’s Center for High Performance Computing. He simulated hundreds of possible shapes of the continent-sized piles and state-sized blobs until he found the shapes that could best explain the seismic wave patterns that were observed.

A Look at the Core-Mantle Boundary

The new study provided an unusual look at one of the most remote parts of the Earth, located about 1,800 miles beneath the surface: the boundary between the planet’s molten outer core and its warm mantle rock, which has convection movement that has been compared with a conveyor belt or slowly boiling tomato soup. (Tectonic plates of Earth’s crust and uppermost mantle drift atop the warmer, convecting lower mantle.)

At some places where oceanic and continental tectonic plates collide – such as offshore from the Pacific Northwest to Alaska – the seafloor plate dives or “subducts” beneath the continent and plunges slowly into the mantle. Thorne suspects subducting plates ultimately fall deep enough to help push the piles around on Earth’s core.

Whether hotspots originate at the core-mantle boundary or at shallower depths has been debated for decades.

But in the 1990s, geophysicists found evidence for the continent-size thermochemical piles beneath Africa and the Pacific. These are known technically as LLSVPs, or “large low shear velocity provinces,” because seismic shear waves passing through them move 5 percent slower that through surrounding mantle rock. That suggests they have a different composition and-or temperature than the surrounding mantle.

Previous studies also have observed smaller blobs of rock, measuring perhaps 60-by-60 miles on the edges of the continent-sized masses. Seismic shear waves move as much as 45 percent slower through these blobs – known technically as ULVZs or “ultra low velocity zones” – indicating they may be spongy and partly molten.

Thorne says his analysis of seismic waves passing through the core-mantle boundary reveals the Pacific pile really represents two or more continent-sized piles slowly sliding atop the core and colliding so that partly molten blobs on their edges are merging into the largest such blob or ULVZ ever observed – roughly the size of Florida.

“My study might be the first to show actual seismic evidence that the piles are moving,” he says. “People who have done previous simulations have suggested this. They are sitting atop the core and getting pushed around by overlying mantle forces like subduction. They move around on the core somewhat like continental plates drift at Earth’s surface.”

Thorne says the merging LLSVP piles are each about 1,800 miles diameter, forming a single pile some 3,600 miles wide from east to west and stretching across Earth’s core beneath an area from Australia almost to South America. Two blobs, or ULVZs, on the piles’ edges merged to form a new blob that is perhaps 6 to 10 miles thick and covers an area about 500 miles long and 150 miles wide, about the area of Florida or “eight to 10 times larger than any ULVZs we observed before,” Thorne says.

Because the larger piles haven’t fully merged, seismic imaging shows there is a depression or “hole” between them, and the Florida-sized blob is forming there as smaller UVLZs merge in the hole.

Warmer rock is less dense than cooler rock. Thorne says that where the ULVZ blobs form seems to be related to where the hot rock starts convecting upward to begin the long, slow process of forming a plume that eventually causes massive eruptions.