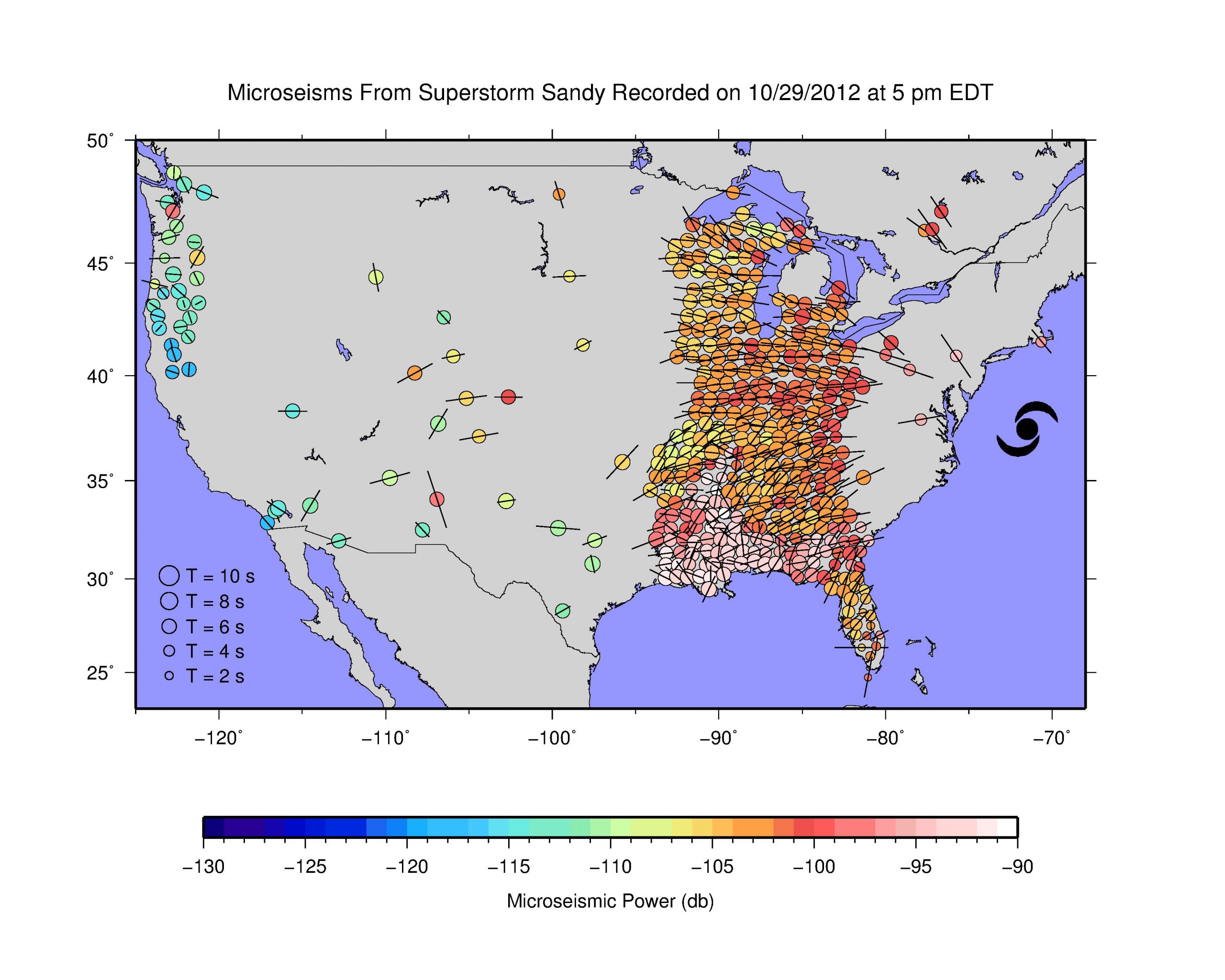 April 18, 2013 – When superstorm Sandy turned and took aim at New York City and Long Island last October, ocean waves hitting each other and the shore rattled the seafloor and much of the United States – shaking detected by seismometers across the country, University of Utah researchers found.

“We detected seismic waves created by the oceans waves both hitting the East Coast and smashing into each other,” with the most intense seismic activity recorded when Sandy turned toward Long Island, New York and New Jersey, says Keith Koper, director of the University of Utah Seismograph Stations.

“We were able to track the hurricane by looking at the ‘microseisms’ [relatively small seismic waves] generated by Sandy,” says Oner Sufri, a University of Utah geology and geophysics doctoral student and first author of the study with Koper. “As the storm turned west-northwest, the seismometers lit up.”

Sufri was scheduled to present the preliminary, unpublished findings in Salt Lake City Thursday, April 18 during the Seismological Society of America’s annual meeting.

There is no magnitude scale for the microseisms generated by Sandy, but Koper says they range from roughly 2 to 3 on a quake magnitude scale. The conversion is difficult because earthquakes pack a quick punch, while storms unleash their energy for many hours.

The shaking was caused partly by waves hitting the East Coast, but much more by waves colliding with other waves in the ocean, setting up “standing waves” that reach the seafloor and transmit energy to it, Sufri and Koper say.

While many people may not realize it, earthquakes are not the only events that generate seismic waves. So do mining and mine collapses; storm winds, waves and tornadoes; traffic, construction and other urban activities; and meteors hitting Earth.

“They are not earthquakes; they are seismic waves,” says Koper, a seismologist and associate professor of geology and geophysics. “Seismic waves can be created by a range of causes. … We have beautiful seismic records of the meteor that hit Russia. That’s not an earthquake, but it created ground motion.”

While Sandy’s seismicity may be news to many, Koper says microseisms just as strong were detected before and after the superstorm from North Pacific and North Atlantic storms that never hit land but created “serious ocean wave action.”

Koper adds: “Hurricane Katrina in 2005 was recorded by a seismic array in California, and they could track the path of the storm remotely using seismometers.”

In a related study set for presentation on Friday at the seismology meeting, Koper and geophysics undergraduate student YeouHui Wong found preliminary evidence that seismometers near Utah’s Great Salt Lake are picking up seismic waves generated either by waves or winds on the lake.

Koper says researchers wonder if microseisms from storms and other causes might trigger tiny but real earthquakes, but “that hasn’t been investigated yet,” he says.

The microseisms generated by Sandy were detected by Earthscope, a National Science Foundation-funded array of about 500 portable seismometers that were first placed in California in 2004 and have been leapfrogging eastward so that most now are located east of line running from Minnesota to east Texas, and west of a line from Lake Erie to Florida. Some remain scattered across the Midwest and West, with a heavier concentration in the Pacific Northwest.

Earthscope’s purpose is to use seismic waves from quakes and other sources to make images of Earth’s crust and upper mantle beneath North America – similar to how X-rays are used to make CT scans of the human body. To do it accurately, scientists must understand all sources of seismic waves.

Sufri says the new study included Earthscope data from Oct. 18 to Nov. 3, 2012, “which coincides with the passage of Hurricane Sandy, and we tried to understand microseisms that were generated.”

Sandy caused a damaging storm surge due to its size – almost 1,100 miles in diameter for tropical-storm-force winds – more than its intensity, which was 3 when it hit Cuba and 2 off the Northeast coast.

“The energy generated by Sandy is going to be used to image the crust and upper mantle under North America,” says Koper, noting that Earthscope uses years of seismic data to construct images. “We are using seismic waves created by ocean waves to make images of the continent.”

Normal ocean waves “decay with depth very quickly,” says Koper. But when Sandy turned, there was a sudden increase in waves hitting waves to create “standing waves” like those created when you throw two pebbles in a pond and the ripples intersect. “Pressure generated by standing waves remains significant at the seafloor,” he says.

“When Sandy made that turn to the northwest, although wind speeds didn’t get dramatically bigger, the seismic energy that was created got tremendously bigger because the ocean’s standing waves were larger from the wave-wave interaction,” he adds.

Not only did the seismic waves become more energetic, “but the periods got longer so, in a sense, the sound of those seismic waves got deeper – less treble, more bass – as the storm turned,” Koper says.

Seismologists can track Sandy and other big storms because seismometers detect three components of motion: one vertical and two horizontal. If most of the energy on a seismometer is detected with a north-south motion, it means the source of the energy is north or south of the device.

“If you have enough seismometers, you can get enough data to get arrows to point at the source,” Koper says.

He says the seismologists didn’t track Sandy in real time, but the seismographic data of the storm suggests it might be possible to help track storms in the future using their seismicity.

Sufri speculates that seismic tracking of storms might allow observations that satellites can miss, and perhaps could help researchers “understand how climate is changing and how it is affecting our oceans – are we seeing more intense storms and increasing numbers of storms?”

Koper says the Sandy study “is exploratory science where we are trying to learn fundamental things about how the atmosphere, oceans and solid Earth interact.”

Video of seismic activity from superstorm Sandy may be viewed and downloaded at:
https://vimeo.com/63694981

Video caption: This University of Utah video shows how ocean wave action from superstorm Sandy in October, 2012 shook the United States, and how the shaking was detected by the Earthscope array of seismometers funded by the National Science Foundation. Blue color means low seismic activity; yellow, orange and red mean high seismic activity. Note how the seismometers twice flash briefly orange-red due to two earthquakes before Sandy appears near the bottom of the screen. As Sandy proceeds north, the seismometers show increasing activity and “point” to Sandy, indicating it is the source of the seismic events, which are “microseisms” and not real earthquakes. The seismometers then show maximum activity when Sandy turns west-northwest toward Long Island, New York City and New Jersey.

The Seismological Society of America Salt Lake City meeting website, including study abstracts, is at: http://seismosoc.org/meetings/2013/