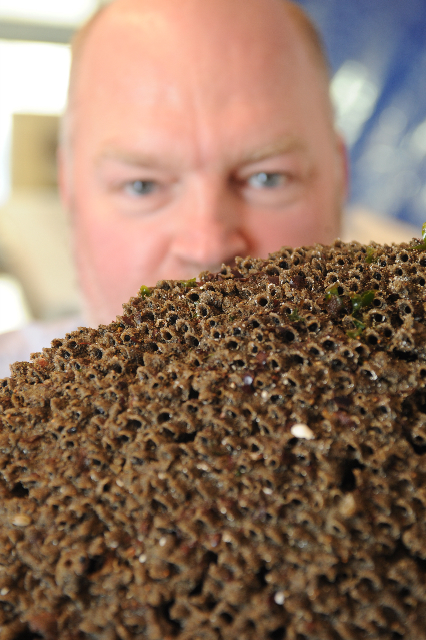 Nov. 25, 2008 – Sandcastle worms live in intertidal surf, building sturdy tube-shaped homes from bits of sand and shell and their own natural glue. University of Utah bioengineers have made a synthetic version of this seaworthy superglue, and hope it will be used within several years to repair shattered bones in knees, other joints and the face.

“You would glue some of the small pieces together,” says Russell Stewart, associate professor of bioengineering and senior author of the study to be published online within a week in the journal Macromolecular Biosciences.

“When you break the top of a bone in a joint, those fractures are difficult to repair because if they are not aligned precisely, you end up with arthritis and the joint won’t work anyway. So it’s very important to get those pieces aligned as well as possible.”

The synthetic sandcastle worm glue would not be used to repair large fractures such as major leg and arm bones, for which rods, pins and screws now are used. But Stewart envisions that it might be used for gluing together small bone fragments in fractured knees, wrists, elbows, ankles and other joints, and also the face and skull.

“If a doctor rebuilds a joint with pins and screws, generally weight is kept off that joint until it’s healed,” Stewart says. “So our goal isn’t to rebuild a weight-bearing joint with glue. It is to hold the pieces together in proper alignment until they heal. … We see gluing the small fragments back into the joint.”

Bioengineer Patrick Tresco, associate dean for research at the University of Utah’s College of Engineering, says: “Most current adhesives do not work when surfaces are wet so they are no good for holding together bone, which is wet and bloody. There is nothing like it [the synthetic worm glue] on the market today.”

The synthetic glue also can carry drugs, so it could be used to deliver pain killers, growth factors, antibiotics, anti-inflammatory medicines or even stem cells to sites where bone fragments are glued, “simultaneously fixing the bone and delivering potent drugs or even genes to the spots where they are needed,” Stewart says.

And where pieces of bone now are cut out due to cancer, the adhesive might be used to firmly attach “tissue scaffolds” used to encourage regrowth of the missing bone.

Stewart is seeking to patent the synthetic sea worm glue so it can be licensed to an outside company that would develop it as a product. He hopes to make better versions that have more bonding power, are biocompatible in the human body and biodegradable.

“Ultimately, we intend to make it so it is replaced by natural bone over time,” Stewart says. “We don’t want to have the glue permanently in the fracture.”

Stewart says some synthetic superglues or “instant glues” are used instead of sutures for superficial skin wounds. But because of toxicity or toxic byproducts, “they are not suitable for deep tissue use,” including bone repair, he adds.

Building a Sandcastle Colony ‘One Grain of Sand at a Time’

Stewart conducted the study with Hui Shao, a doctoral student in bioengineering; and Kent Bachus, a research associate professor of orthopaedics.

The study involved Phragmatopoma californica, the sandcastle worm, which lives in vaguely sandcastle-like colonies of tube-shaped homes on the California coast.

The adult worm is an inch or so long, and an eighth-inch in diameter. But they build tubes several inches long, using sand grains and shell fragments.

“They will not leave their tube. They live in their tube and have dozens of tentacles they stick out one end of the tube, which is how they gather food and particles to build their shells with.”

Tiny, hair-like cilia brush the sand grains and shell pieces down the tentacles so they can be grabbed by the worm’s fleshy, pincer-like “building organ” and glued onto the under-construction tube piece by piece.

The worm “secretes two little dabs of glue onto the particle,” says Stewart. “And the building organ puts it onto the end of the tube and holds it there for about 25 seconds, wiggling it a little to see if the glue is set, and then it lets go. The glue is designed to set up and harden within 30 seconds after the worm secretes it.”

Worms build their tube-like shells next to each other, like stacks of pipes, to form a large colony. “One grain of sand at a time it builds big, reef-like colonies the size of Volkswagens,” Stewart says. “A colony looks like a mound.”

In the lab, Stewart previously showed the worms will use any handy building material, using their natural adhesive to build tubes by gluing together tiny pieces of egg shell, glass beads, red sand, bone, zirconium oxide, and even pieces of a silicon chip.

The Chemistry of Glue

“But we took the compositional characterization a lot further,” hypothesized how the worm glue works, and used that to create the synthetic glue, says Stewart.

In the natural worm glue, each protein polymer’s “backbone” is made of polyamide, which has “side chains” of other chemicals attached to the backbone.

Stewart didn’t use polyamide in the synthetic glue because it is impractical to synthesize. Instead, for the “backbone” of polymers in the synthetic glue, he used water-soluble polyacrylates, synthetic polymers that are related to commercial superglues and are used in floor wax, nail polish, pressure-sensitive adhesives and Plexiglas.

The “side chains” attached to the synthetic glue’s polymer backbones copied the natural worm glue’s side chains chemically and in other ways, Stewart says. Some side chains are dopa, which makes the glue function as glue.

“We made polymers with side chains that mimicked the positive and negative charges in the worm glue,” Stewart says.

When the polymers are mixed, they form an unusual substance known as a “coacervate,” which condenses out of the polymer solution and sinks to the bottom of a test tube as a dense solution that is the foundation of the synthetic glue.

The two polymers in the coacervate “cross link” – their side chains attach to each other – forming chemical bonds that make synthetic worm glue harden.

Because the solution-within-a-solution doesn’t disperse, it can be sucked up with a syringe. “In some cases we may be able to repair bones with a [glue-filled] syringe rather than screws and power tools,” says Stewart.

To test the strength of the synthetic glue, Stewart cut cow leg bones from grocery stores in cubes measuring 0.4 inches on a side, sanded the pieces, got them wet and bonded pieces together either with synthetic worm glue or with Loctite 401 superglue. The bonded pieces of bone were kept warm and wet for 24 hours. He tested the strength of the glues by using dull blades to push each of the glued cubes in opposite directions until the bond failed.

To watch a video of a sandcastle worm building its tube in the laboratory using its natural glue and pieces of silicon, click on this link, then, under “Seaworm Glue video,” click on either the MOV (Quicktime) or WMV (Windows Media Player) format for the video: