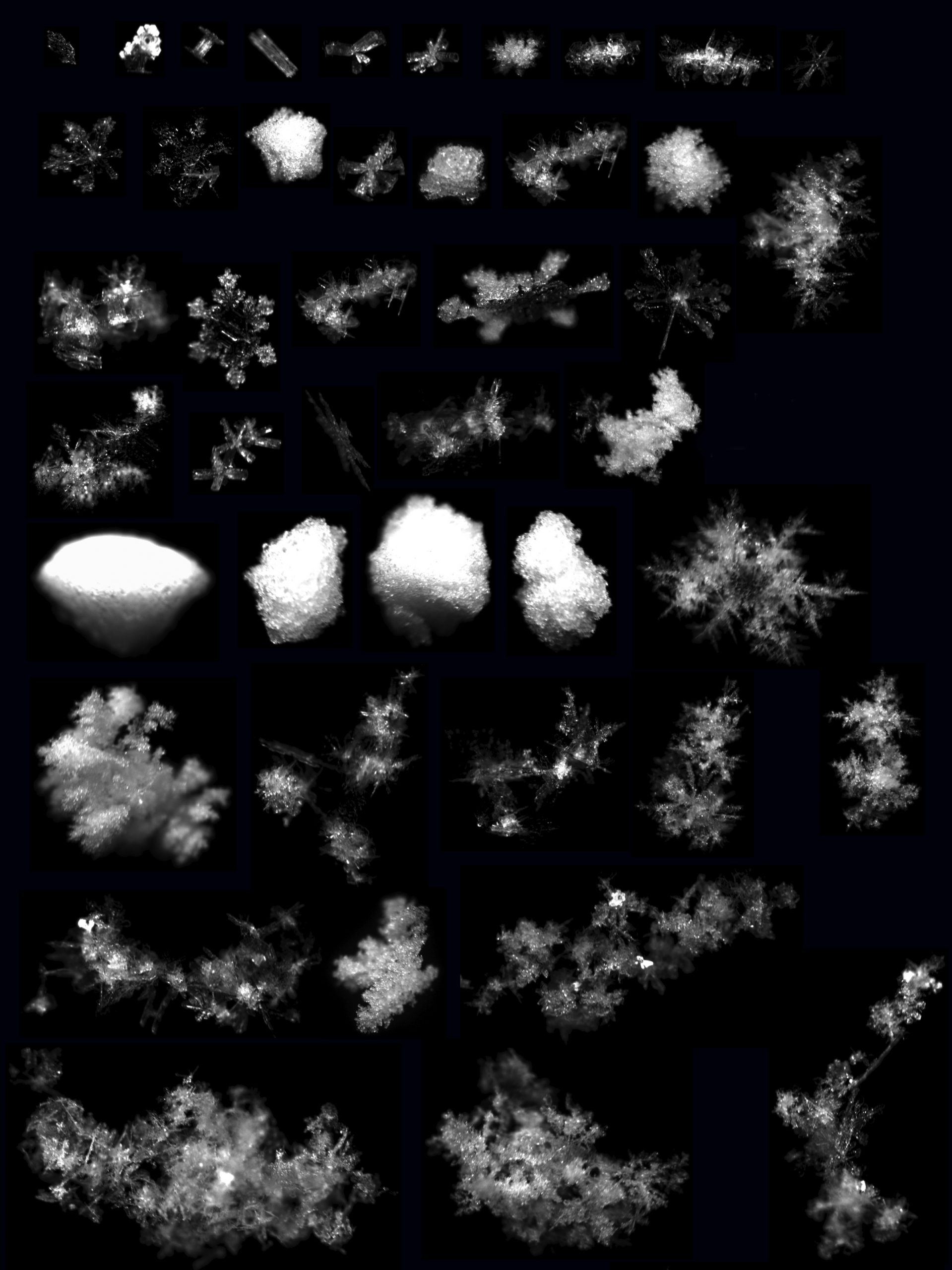 April 10, 2013 – University of Utah researchers developed a high-speed camera system that spent the past two winters photographing snowflakes in 3-D as they fell – and they don’t look much like those perfect-but-rare snowflakes often seen in photos.

“Until our device, there was no good instrument for automatically photographing the shapes and sizes of snowflakes in free-fall,” says Tim Garrett, an associate professor of atmospheric sciences. “We are photographing these snowflakes completely untouched by any device, as they exist naturally in the air.”

Snowflakes in traditional photographs “tend to be of a particular type that conveniently lies flat on a microscope slide, where a camera can get them perfectly in focus, and the photographer can take the time to get the light exactly right,” he says.

“These perfectly symmetric, six-sided snowflakes, while beautiful, are exceedingly rare – perhaps one-in-a-thousand at the most,” says Garrett. “Snow is almost never a single, simple crystal. Rather, a snowflake might experience ‘riming,’ where perhaps millions of water droplets collide with a snowflake and freeze on its surface. This makes a little ice pellet known as ‘graupel.’ Or snowflakes collide with other snowflakes to make something fluffier, called an aggregate. And everything is possible in between.”

NASA and the U.S. Army helped fund development of the camera, and the National Science Foundation funded the observations. Garrett says the goal is to improve computer simulations of falling snow and how it interacts with radar. That should help improve the use of radar for weather and snowpack forecasting, and reveal more about how snowy weather can degrade microwave (radar) communications.

“Our instrument is taking the first automated, high-resolution photographs of the complexity of snowflakes while measuring how fast they fall, and is collecting vast amounts of data that can be used to come up with more accurate and more representative characterizations of snow in clouds,” Garrett says.

With help from the University of Utah’s Technology Commercialization Office, Garrett and Cale Fallgatter – a 2008 master’s graduate in mechanical engineering – formed a spinoff company, Fallgatter Technologies, to make the new camera system, known as the MASC, for Multi-Angle Snowflake Camera, for which a patent is pending.

The Multi-Angle Snowflake Camera has a ring-shaped housing measuring about 1 foot wide and roughly 4 inches tall. The three cameras are mounted on one side, each separated by 36 degrees and pointed toward the center.

“For forecasting the weather, fall speed is the thing that matters,” Garrett says. “The weather models right now do OK at simulating clouds, but they are struggling to accurately reproduce precipitation: rain or snow, but particularly snow. The problem is that we do not have a very good sense for how the sizes and shapes of snow particles relate to how fast they fall. This is important because the lifetime of a storm, and where exactly it snows, depends greatly on how fast snow precipitates.”

Fallgatter says the multi-angle camera takes only black-and-white images because that gets more information; color filters block some light from images. The snowflake camera also has an extremely fast exposure time of up to one-40,000th of a second so it can capture pictures of fast-moving snowflakes in free-fall without blurring them.

Why Care about Snowflakes?

“Snowflakes are beautiful and fascinating, and truly no two are alike,” Garrett says. “This complexity almost makes them worth studying in their own right. But also, there are very serious practical reasons why we need to understand snow better.”

Falling snow affects both microwave communications and weather-forecasting radar (which uses microwaves), yet “the big problem is there is a very poor sense of how microwave radiation interacts with complex snowflake shapes,” Garrett says.

Weather models used in forecasting now invoke complicated formulas to simulate precipitation – “how cloud droplets turn into snow, snow turns into graupel and all the complicated ways in which particles in a cloud can change in size, shape and fall speed as a storm progresses,” Garrett says. “There has been a huge amount of research into improving these formulas, but their accuracy is limited by how well we are able to measure snow and how fast it falls.”

He says errors in snowflake shape and size lead to errors in forecasting snowfall amounts and locations.

Garrett says today’s weather forecasts still use snowflake research done meticulously by hand in the 1970s in the Pacific Northwest’s Cascade Range. Snowflake fall speed was measured, and the flakes then were collected on plastic wrap, photographed, and melted to determine their mass.

“These early researchers got only a few hundred images over two years because they had to collect each snowflake individually by hand,” Garrett says. “Our snowflake camera can automatically collect thousands of snowflake photographs in a single night.”

Fallgatter and Garrett use two of the multi-angle cameras at Utah’s Alta Ski Area, in the Wasatch Range above Salt Lake City. One is located at an elevation of 10,000 feet in Collins Gulch, and the other at 8,500 feet at Alta Base.

“We can look at how the snowflakes change as they fall down the mountainside – if there is a change in the sizes and shapes of snowflakes as they fall,” Garrett says. “This is one of the things weather models try to simulate.”

The researchers use automatic, image-analysis software to characterize snowflakes by shape, complexity, size and estimated mass.

“The complexity is so vast as to almost defy an easy categorization of snowflakes,” Garrett says. “Everything lies along a continuum of possible sizes, shapes and extent of riming.”

Also at Alta Base, researcher Sandra Yuter of North Carolina State University operates a vertically pointing radar that measures the precipitation structure in the air column over Collins Gulch.

“The radar tells you how strong the storm is, where and when there are layers of rain and snow, and how tall the storm is,” Garrett says. “To interpret what we’re seeing with the cameras, it helps to know the structure within the storm and how it is changing with time.”

“Ultimately, the primary diagnostic tool that weather forecasters use during a storm is radar, and they want to be able to relate what they see on radar to whether or not there is snow or graupel, and how much.”

The Alta Ski Area helps the project by providing a cabin for the instruments, and a Snowflake Showcase through its website, where the public can see a live feed of Multi-Angle Snowflake Camera pictures. Daniel Howlett, an avalanche specialist with the Alta Ski Patrol, helps with camera installation, maintenance and data collection. Software for the snowflake camera was developed by Konstantin Shkurko, a University of Utah doctoral student in computer science.

A University of Utah online gallery of snowflake photographs may be viewed at:
http://www.inscc.utah.edu/~tgarrett/Snowflakes/Gallery/