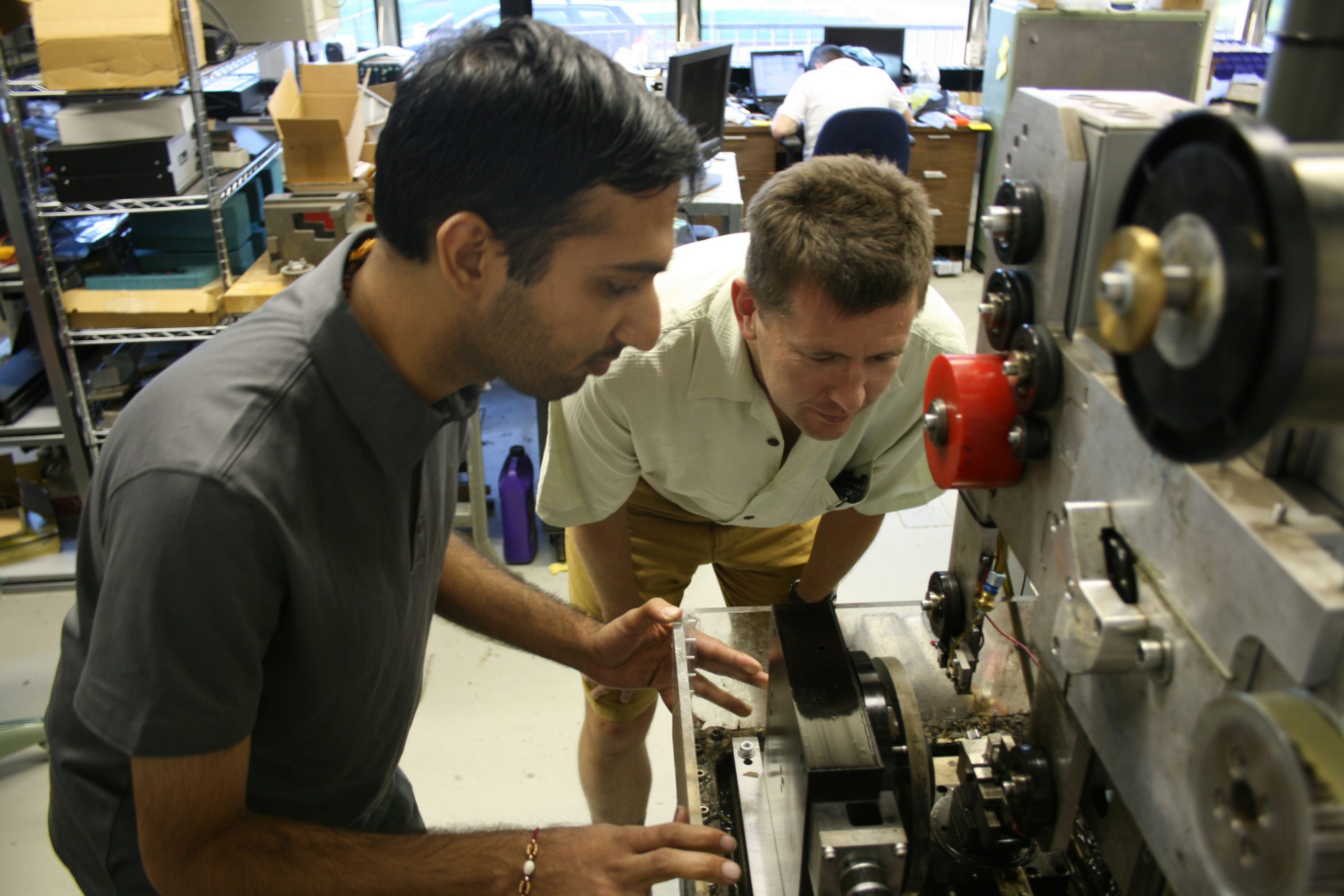 Sept. 15, 2008 – University of Utah engineers devised a new way to slice thin wafers of the chemical element germanium for use in the most efficient type of solar power cells. They say the new method should lower the cost of such cells by reducing the waste and breakage of the brittle semiconductor.

The expensive solar cells now are used mainly on spacecraft, but with the improved wafer-slicing method, “the idea is to make germanium-based, high-efficiency solar cells for uses where cost now is a factor,” particularly for solar power on Earth, says Eberhard “Ebbe” Bamberg, an assistant professor of mechanical engineering. “You want to do it on your roof.”

Dinesh Rakwal, a doctoral student in mechanical engineering, adds: “We’re coming up with a more efficient way of making germanium wafers for solar cells – to reduce the cost and weight of these solar cells and make them defect-free.”

Bamberg and Rakwal are publishing their findings in the Journal of Materials Processing Technology. Their study has been accepted, and a final version will be published online late this month or in early October, and in print in 2009.

Brass-coated, steel-wire saws now are used to slice round wafers of germanium from cylindrical single-crystal ingots. But the brittle chemical element cracks easily, requiring broken pieces to be recycled, and the width of the saws means a significant amount of germanium is lost during the cutting process. The sawing method was developed for silicon wafers, which are roughly 100 times stronger.

The new method for slicing solar cell wafers – known as wire electrical discharge machining (WEDM) – wastes less germanium and produces more wafers by cutting even thinner wafers with less waste and cracking. The method uses an extremely thin molybdenum wire with an electrical current running through it. It has been used previously for machining metals during tool-making.

Germanium serves as the bottom layer of the most efficient existing type of solar cell, but is used primarily on NASA, military and commercial satellites because of the high expense – raw germanium costs about $680 per pound. Four-inch-wide wafers used in solar cells cost $80 to $100 each, and the new cutting method may reduce the cost by more than 10 percent, says Grant Fines, chief technology officer for germanium wafer-maker Sylarus Technologies in St. George, Utah.

“Anything that can be done to lower this cost ultimately will lower the cost of solar power per kilowatt-hour, which is beneficial,” and will encourage wider use of solar power, he adds. “That’s why this technology Ebbe has come up with is very intriguing.”

Sylarus is considering using the new method, but must determine if it can be scaled up so wafers can be mass-produced in a commercially viable manner, Fines says.

Bamberg’s method would “reduce the amount we have to recycle and increase the yield,” he adds. “It has the potential to give good savings, which helps enable this technology here on Earth.”

A patent is pending on a way of using the new method so that multiple, parallel electrically charged wires are used to cut germanium wafers – a mass-production method Bamberg compares with an egg slicer.

Germanium is a semiconductor at the bottom of “multijunction” solar cells. Above it are layers of gallium-indium-arsenide and gallium-indium-phosphide. The layers work together to capture different wavelengths of sunlight, and the germanium also serves as the substrate upon which the solar cell is “grown.”

When sunlight hits a solar cell, the energy is converted to a flow of electrons in the cell, namely, electricity.

Silicon-based solar cells on Earth have maximum efficiency of 20 percent, Fines says. In space, germanium solar cells typically convert 28 percent of sunlight into electricity, but on Earth where solar concentrators are used, they can convert more than 40 percent of sunlight into electricity, and their efficiency theoretically exceeds 50 percent, he adds.

Despite the greater efficiency of germanium-based solar cells, a 2005 survey found that 94 percent of solar cells made for non-space uses were silicon-based because silicon is much cheaper and less fragile than germanium, the Utah researchers say.

Bamberg says germanium-based solar cells are used on most spacecraft because they are more efficient and lighter than silicon-based solar cells. By making it more attractive economically to use efficient germanium solar cells on rooftops, the weight and size of solar panels can be reduced “so it doesn’t bother you aesthetically,” he adds.

In the new method, the molybdenum wire essentially is an electrode, and it is connected to a pulsed power supply that charges the wire during the cutting process.

A cylinder-shaped germanium ingot rests on a horizontal support, and the wire is lowered into the ingot as new wire is pulled continually from a supply spool to replace the cutting wire as it wears. Thin, synthetic oil is injected along the wire, both to increase the electrical charge on the wire and to flush away material that melts during the cutting process.

The process is slow. Wire electrical discharge machining takes 14 hours to cut a single wafer. Bamberg says the electrified wire method has to be done gently to avoid cracking the germanium, but he hopes to increase the speed to the six hours it now takes to cut a wafer using a wire saw.

Wire saws made of brass-coated steel have a thickness of about 170 or 180 microns (millionths of a meter). The Utah researchers used molybdenum wire 75 to 100 microns thick, a bit thicker than a human hair. Less germanium is wasted during the slicing process because the electrified cutting wire is thinner.

The study found that a 100-micron-thick electrified wire significantly reduced the waste and increased the number of wafers that could be made from a germanium ingot, but a thinner 75-micron-wide wire did even better.

“At the current standard wafer thickness of 300 microns, you can produce up to 30 percent more wafers using our method” with a 75-micron-wide wire, Bamberg says. “Since we produce them crack free, we can also make them thinner than standard techniques. So if you go down to a 100-micron-thick wafer, you can make up to 57 percent more wafers [from the same germanium ingot]. That’s a huge number.”

Making the wafers thinner will reduce their cost because more can be made from the same ingot, he adds.

The new study found that the “kerf” – which is the amount of germanium wasted during the slicing process – was 22 percent less when a 75-micron diameter electrified wire was used to cut the wafers, compared with the conventional wire saw method. The researchers cut 2.6-inch-diameter wafers with a thickness of 350 microns.

The study also showed less germanium was wasted not only using the smaller wire size, but also if the charge on the electrified wire was lower.

The study was funded by the National Science Foundation, University of Utah Research Foundation and Sylarus Technologies.

This news release and downloadable, high-resolution photos are available at: