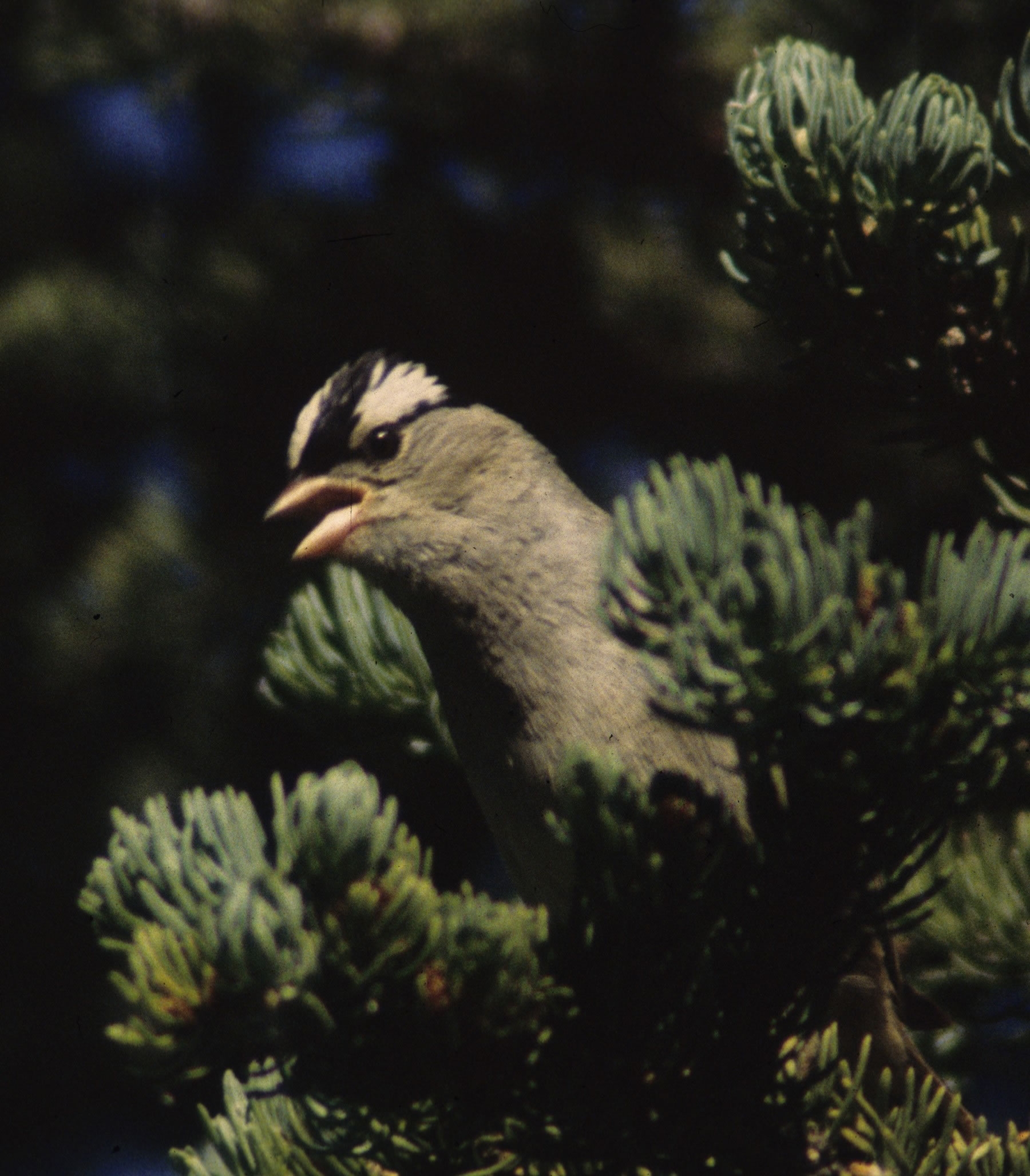 Dec. 8, 2004 – University of Utah scientists taught baby sparrows to sing a complete song even though the birds were exposed only to overlapping segments of the tune rather than the full melody. The study provides clues about how musical memories are stored in the brain and how those memories help birds learn to sing.

The results also may have implications for how people learn language, says Gary J. Rose, a University of Utah professor of biology and principal author of the study published in the Dec. 9 issue of the journal Nature.

“There are strong parallels between song learning in birds and speech learning in humans,” he says. “Like humans, songbirds learn particular regional dialects, so they represent excellent opportunities to study the physiological basis of language. If we can understand something about how song is represented in their brains, then maybe we can better understand how speech learning occurs in humans and, when it goes awry, how we might go about fixing it.”

Study co-author Stephanie Plamondon, a doctoral student in neuroscience, added: “We were able to give the birds just pieces of the song, and they were able to assemble a complete song from those pieces. … A full song or a complete sentence isn’t required to learn the song, only an association between phrases [segments] of the song.”

Other authors of the study were Franz Goller, an associate professor of biology; Brenton Cooper, a postdoctoral researcher in Goller’s laboratory; and Howard Gritton and Alexander Baugh, who worked on the study as undergraduates, then as technicians.

Songbirds must hear their species’ song when they are young or they fail to learn to sing it. Such birds “produce very simple songs, mostly repeated whistles,” Rose says.

Birds learn to sing in stages. First, there is a “subsong” phase in which they babble softly, almost like human infants. Then, they undergo a “plastic” phase when they practice singing for eight or nine months, and “when the bird is producing song and comparing it to the memory he has formed,” Plamondon says. After that, the birds undergo “crystallization,” which means their song is crystallized or essentially set in stone – at least until the next mating season, when some changes can occur.

The Utah biologists tested a theory dealing with the long-term “auditory memory” formed by young sparrows when they first hear other sparrows sing. Scientists want to know how that memory is stored in the brain, and how that memory is used as the birds learn to sing weeks later.

The complete white-crowned sparrow song has five segments or snippets – researchers call them “phrases” – represented by the letters ABCDE. A is a characteristic opening whistle; B is a “note complex,” or several musical notes in a specific sequence; C is a buzzing sound; D is a trilling sound and E is another note complex.

Plamondon says song learning is unlikely to be completely genetic because white-crowned sparrows in different regions have different dialects; they vary in how they assemble song segments. Rose says there is no evidence the birds use short-term memory to remember their song when they are tutored, and it’s unlikely the sparrows carry some sort of internal instructions on how to assemble song segments into a complete song.

Instead, the new study indicates the sparrows’ characteristic song is imprinted on their brain like a long-term memory, and not as a complete song, but in pieces. Rose and colleagues propose that circuits of certain nerve cells only detect – and only need to detect – pairs of song segments (AB, BC, CD, DE) for the birds to learn to sing. That is because each pair of segments overlaps the next, allowing the bird to figure out how to string together the complete melody.

Rose says nerve circuits that detect pairs of song segments are shaped as the birds practice singing. “In many cases, experience shapes the function of the brain,” he says. “If humans don’t have normal vision during the first few weeks of life, they become functionally blind. If infants don’t hear speech they obviously won’t learn to produce a verbal language.”

He adds: “If experience early in life is essential for shaping the function of the brain, then we need to understand how that happens. And songbirds are one of the few cases other than humans that actually learn their verbal language and have to be tutored.” (The others are the cetaceans – whales, dolphins and porpoises – and perhaps bats.

The researchers first recorded songs from white-crowned sparrows in Utah’s Wasatch Range. They digitized the recordings so they could break them into five segments or snippets they called “phrases.”

Rose and colleagues obtained permits to capture sparrow nestlings, hand-feeding and raising them in the laboratory in sound-proof cages so they didn’t hear each other.

When the sparrows were 2 weeks old, the researchers began trying to teach them to sing by playing them segments of the complete song in different orders. Separate 90-minute tutoring sessions were conducted for each bird twice daily for 60 days.

In the first experiment, the scientists played one segment or phrase of the sparrow song at a time, separated by 2.5-second silences. They played the segments in reverse order – E, then D, then C, B and A – to control against the birds simply storing what they heard (ABCDE) in short-term memory and repeating it. The nine birds in this experiment could not string the segments together in the right order to sing the entire song ABCDE.

In a final experiment, five sparrows heard pairs of song segments, with each pair in reverse order: BA, then CB, DC and ED. The birds again learned to string the segments together, but because the segments were reversed, they sang with the segments strung together backward – EDCBA.

Rose says the reversal was surprising because it shows training can overcome sparrows’ innate tendency to start their song with a whistle (represented by A).

The sparrows’ ability to construct a complete song from its pieces by knowing how the pieces fit together is comparable to completing a jigsaw puzzle, says Rose.

“You don’t have to know what the puzzle picture looks like, just the rules for putting the pieces together,” for example, that they fit like locks and keys, he says.

Rose believes birds perfect their songs because they start combining various song segments and retain only those pairs (AB, BC, CD, DE) that match the memory of what they are tutored and reject others (such as AC or EC) that are not reinforced by tutoring.

“The relevance of these findings is that this may be representative of how learned sequences of movements of various types work,” he adds. “A jazz musician, for example, learns the rules for making transition from one note to the next, and can compose full songs by observing those rules.”