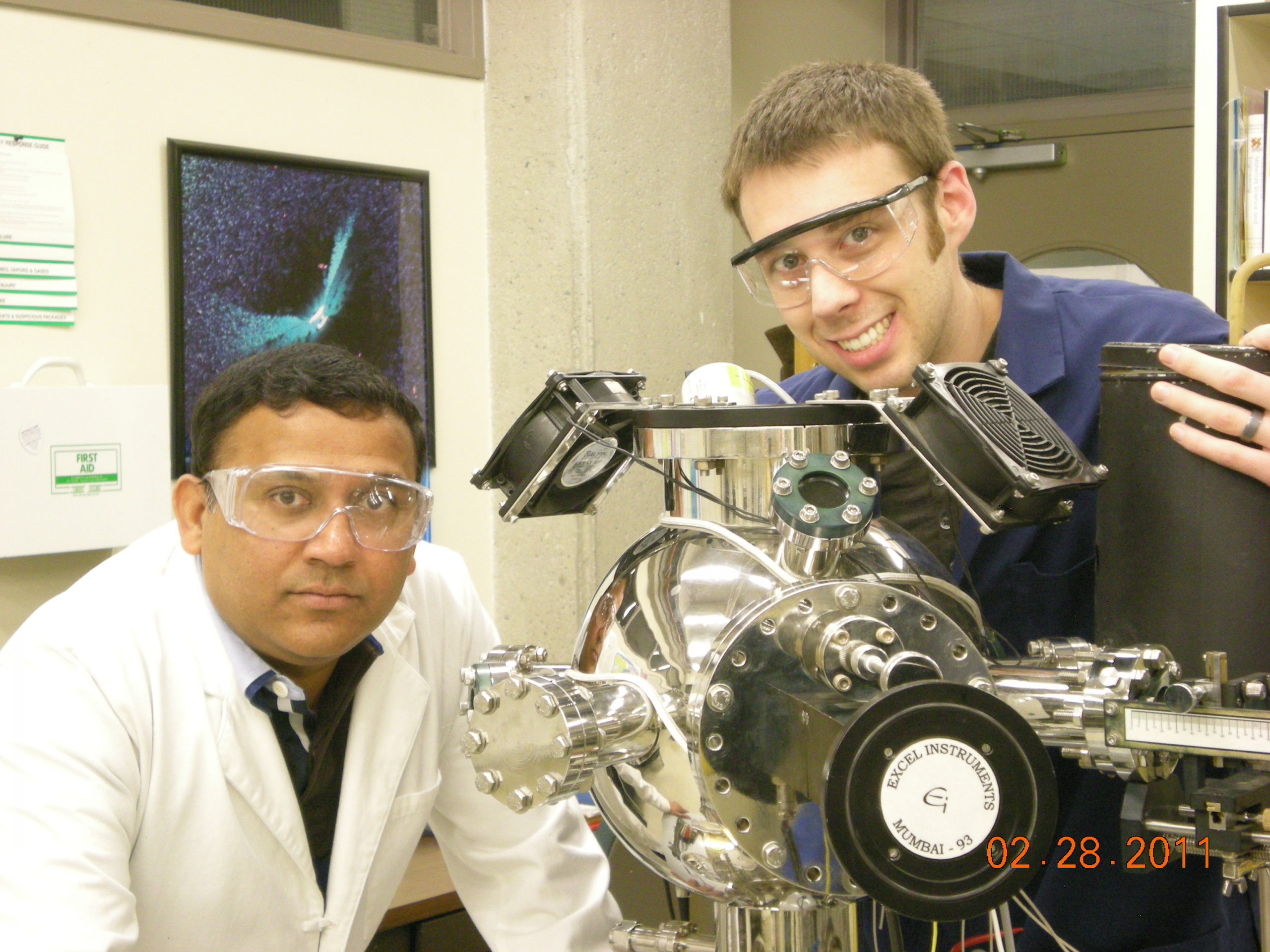 March 15, 2011 – University of Utah researchers built “spintronic” transistors and used them to align the magnetic “spins” of electrons for a record period of time in silicon chips at room temperature. The study is a step toward computers, phones and other spintronic devices that are faster and use less energy than their electronic counterparts.

“Electronic devices mostly use the charge of the electrons – a negative charge that is moving,” says Ashutosh Tiwari, an associate professor of materials science and engineering at the University of Utah. “Spintronic devices will use both the charge and the spin of the electrons. With spintronics, we want smaller, faster and more power-efficient computers and other devices.”

Tiwari and Ph.D. student Nathan Gray report their creation of room-temperature, spintronic transistors on a silicon semiconductor this month in the journal Applied Physics Letters. The research – in which electron “spin” aligned in a certain way was injected into silicon chips and maintained for a record 276 trillionths of a second – was funded by the National Science Foundation.

“Almost every electronic device has silicon-based transistors in it,” Gray says. “The current thrust of industry has been to make those transistors smaller and to add more of them into the same device” to process more data. He says his and Tiwari’s research takes a different approach.

“Instead of just making transistors smaller and adding more of them, we make the transistors do more work at the same size because they have two different ways [electron charge and spin] to manipulate and process data,” says Gray.

A Quick Spin through Spintronics

Modern computers and other electronic devices work because negatively charged electrons flow as electrical current. Transistors are switches that reduce computerized data to a binary code of ones or zeros represented by the presence or absence of electrons in semiconductors, most commonly silicon.

In addition to electric charge, electrons have another property known as spin, which is like the electron’s intrinsic angular momentum. An electron’s spin often is described as a bar magnet that points up or down, which also can represent ones and zeroes for computing.

Most previous research on spintronic transistors involved using optical radiation – in the form of polarized light from lasers – to orient the electron spins in non-silicon materials such as gallium arsenide or organic semiconductors at supercold temperatures.

“Optical methods cannot do that with silicon, which is the workhorse of the semiconductor and electronics industry, and the industry doesn’t want to retool for another material,” Tiwari says.

“Spintronics will become useful only if we use silicon,” he adds.

In the new study, Tiwari and Gray used electricity and magnetic fields to inject “spin polarized carriers” – namely, electrons with their spins aligned either all up or all down – into silicon at room temperature.

“This thing works at room temperature,” Tiwari says. “Most of the devices in earlier studies have to be cooled to very low temperatures” – colder than 200 below zero Fahrenheit – to align the electrons’ spins either all up or all down. “Our new way of putting spin inside the silicon does not require any cooling.”

Each nickel-iron transistor had three contacts or electrodes: one through which electrons with aligned spins were injected into the silicon and detected, a negative electrode and a positive electrode used to measure voltage.

During the experiment, the researchers send direct current through the spin-injector electrode and negative electrode of each transistor. The current is kept steady, and the researchers measure variations in voltage while applying a magnetic field to the apparatus.

“By looking at the change in the voltage when we apply a magnetic field, we can find how much spin has been injected and the spin lifetime,” Tiwari says.

A 328 Nanometer, 276 Picosecond Step for Spintronics

For spintronic devices to be practical, electrons with aligned spins need to be able to move adequate distances and retain their spin alignments for an adequate time.

During the new study, the electrons retained their spins for 276 picoseconds, or 276 trillionths of a second. And based on that lifetime, the researchers calculate the spin-aligned electrons moved through the silicon 328 nanometers, which is 328 billionths of a meter or about 13 millionths of an inch.

“It’s a tiny distance for us, but in transistor technology, it is huge,” Gray says. “Transistors are so small today that that’s more than enough to get the electron where we need it to go.”

“Those are very good numbers,” Tiwari says. “These numbers are almost 10 times bigger than what we need [for spintronic devices] and two times bigger than if you use aluminum oxide” instead of the magnesium oxide in his study.

The new study’s use of electronic spin injection is much more practical than using optical methods such as lasers because lasers are too big for chips in consumer electronic devices, Tiwari says.

Gray says spintronics is “the next big step to push the limits of semiconductor technology that we see in every aspect of our lives: computers, cell phones, GPS (navigation) devices, iPods, TVs.”