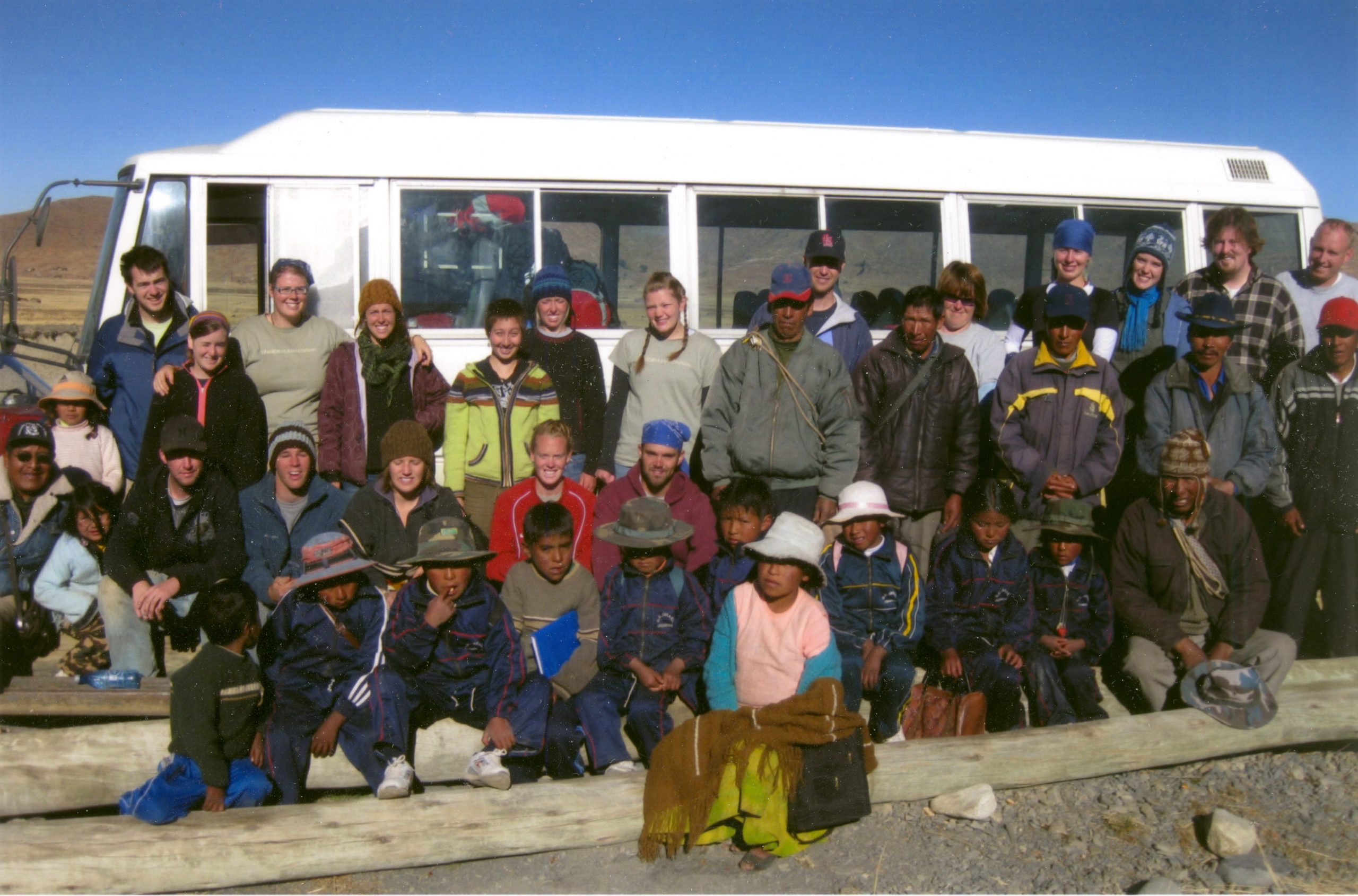 Nov. 18, 2008 – As Thanksgiving nears, 12 Bennion Center students will greet the holiday reflecting on a transformative exchange for which they will be giving thanks for years to come.

“How can you think globally and act locally if you’ve never been abroad?” asks U of U student June Hiatt when explaining her decision to participate in the Lowell Bennion Community Service Center’s international service trip to Bolivia. Hiatt was one of 12 University of Utah students who packed their bags and headed south of the equator to learn about service beyond their own borders.

The eleven-day trip from Aug. 5 to 13 was led by Brent Spencer, student programs coordinator for the Bennion Center and former Bolivia U.S. Peace Corps volunteer. Spencer says that as a former employee of the U’s International Center he received myriad requests for international service trips. “So when I moved to the Bennion Center I started working to make that opportunity a reality,” he says.

Spencer worked with Choice Humanitarian, a local non-profit organization dedicated to ending poverty through sustainable village development, to coordinate the five-day stay in the rural village of Suriquina in the Altiplano region of Bolivia. Volunteers experienced a school-building project supported by Choice Humanitarian.

“Working with Choice was a natural fit because of their commitment to sustainable development in the communities they serve,” explains Spencer. “They do more than come into a community a build and school or a well-they require the villagers to initiate the project by applying for funding and then doing the construction as a village, thereby creating a commitment on the part of the community to complete the project.”

That aspect of the project was what impressed Bennion Center students. Rebecca Van Maren, a junior majoring in communication and consumer studies, remarked that “the difference between sustainable development and relief can be beneficial or damaging. If we’re doing all the work and you just sit there, what are you gaining?”

Maren is well versed in service. A two-time Bennion Center Alternative Spring Break (ASB) participant to New Orleans and Seattle, Maren says this experience put a great deal of her past learning into perspective. “It’s all about engaging the community. If they are not invested in the project from the start, no amount of service work we do as volunteers will help better the community.”

Students arrived in La Paz on Independence Day and following the colorful festivities, were shuttled the next day to the arid, high-lying plane in Bolivia’s Andes known as the Altiplano. They spent five days in the village of Suriquina, where they slept on the floor of the community center and learned to live life at a different pace.

“There was a vast difference in living standards between Bolivians in La Paz and those in the village,” says Hiatt. “They use cow pies for fuel, subsist on potatoes and many believed that because we were foreigners, we had a cure for arthritis. Personally, I learned that I can survive without a computer, a cell phone and electricity.”

Hiatt recalls collecting used batteries and burying them because children were sucking on them like candy. “I experienced a new way to look at what I can learn from a community. And even for the poverty, the people of Suriquina are motivated and committed to making their community better,” she says.

The school was mostly built by the time the Bennion Center volunteers arrived. Choice encouraged the villagers to appoint village leaders and helped them through the process by teaching them how to write grants and secure funding. The community provided labor, rocks and cement; the municipality provided bricks and hardware; and Choice did the finishing work such as plaster, windows and desks.

“Now they have a real school and they can petition the government for a paid teaching position. Because Choice was there it took the village only two months. It gave them a push for solidarity,” Hiatt adds.

There was no foreign language requirement to participate in the trip though several students spoke Spanish.

Participants also learned some words and phrases in Aymara to help them communicate with the community. Students paid for their own airfare. Thanks to generous donations from the Albert and Elaine Borchard Foundation and the University of Utah Student Affairs department, students paid a program cost of $180.

“After this experience I can’t go anywhere as a tourist again,” Maren says. “I wouldn’t have gotten to know the culture or the people as intimately as I did.”