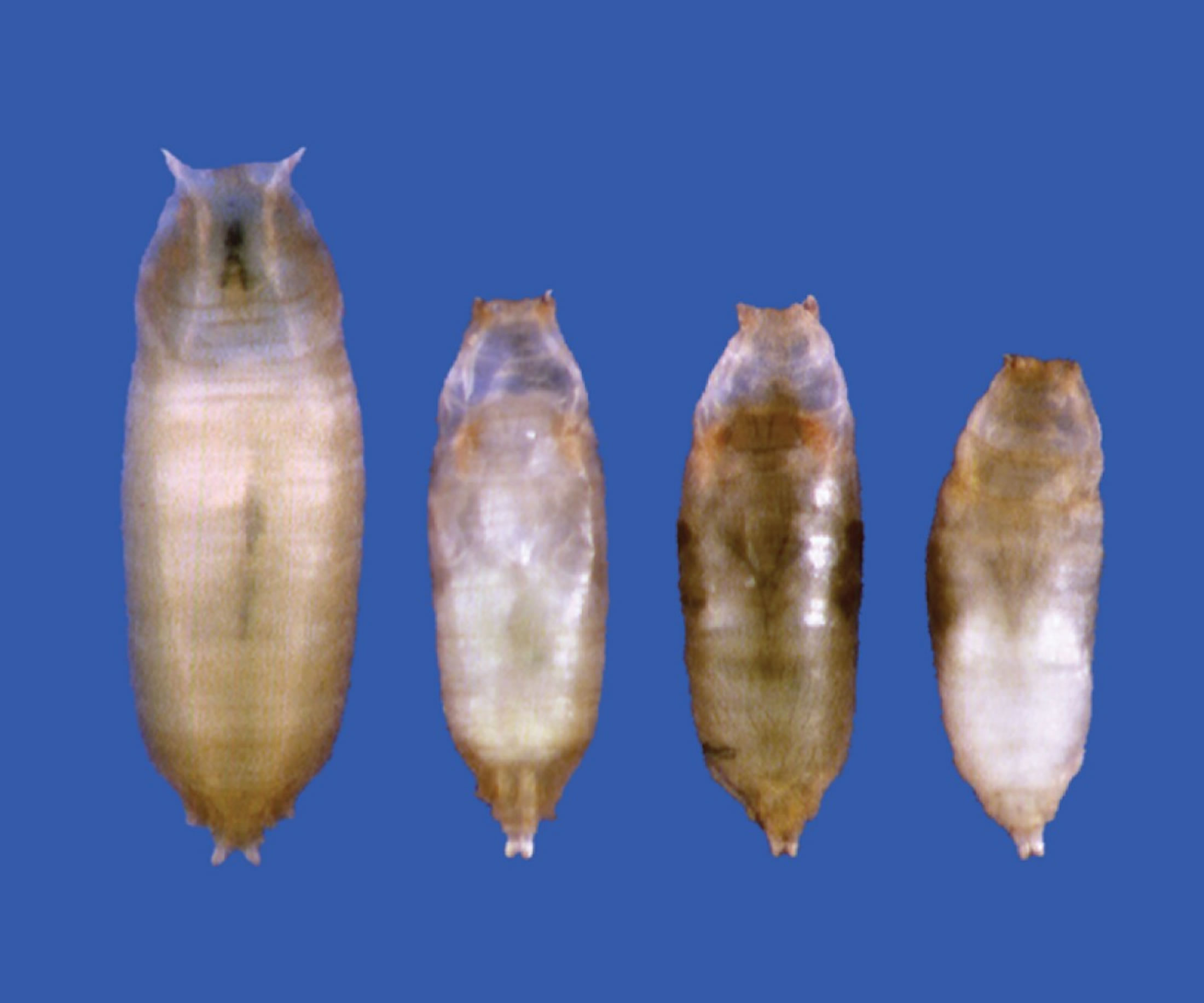 June 2, 2005 — University of Utah researchers showed that a fruit fly gene is crucial for determining when juveniles begin to mature into adults, and how the transformation initially proceeds. Understanding this process in humans may help explain how adorable children become surly teenagers.

When the DHR4 gene is disabled, fruit flies prematurely begin metamorphosis – maturation from an immature larva to a sexually active adult. It is the first genetic mutation found to cause early maturation in fruit flies, according to a new study in the Friday June 3 issue of the journal Cell. The flies are abnormally small and die as they enter adulthood, sometimes when their heads fail to emerge from their bodies.

“We identified a gene that is needed for the animal to progress through normal juvenile development to maturation,” says University of Utah geneticist Carl Thummel, the study’s principal author. “Without this gene, the juvenile stage is shortened, and it enters adulthood early. The animal then dies because the gene also is needed for continued maturation.”

The process is relevant to people because insect metamorphosis is analogous to the transformation of a human “from a juvenile, non-reproductive stage to a mature, sexually reproductive adult,” says Thummel, a professor of human genetics at the university and an investigator with the Howard Hughes Medical Institute.

“Our kids stay sweet and cute through about 12 years of life and then, suddenly, in response to steroid and thyroid hormones and their receptors [molecules that help hormones control genes], they begin this amazing transformation into smelly, hairy, sometimes surly, sexually mature teenagers,” he adds. “How is this event timed, and how is it controlled at a molecular [genetic] level? Clearly there is genetic input, since the timing of maturation varies between families and cultures. But molecular mechanisms are presently unknown. Our study addresses this question using fruit flies, which have many of their genes in common with us and which are ideal for studying genetics.”

Thummel says the human equivalent of the fruit fly DHR4 gene probably does not work the same way in people as it does in flies. “But things we can study in detail in the fly, like the role of DHR4 in maturation, will provide new directions for understanding poorly defined processes in humans, such as maturation,” he says. “This has been shown over and over again, where people have done studies in the fly and it later has been shown that similar genes work much the same way in humans.”

Thummel studied the role of the DHR4 gene with two University of Utah and Howard Hughes Medical Institute colleagues – postdoctoral researcher Kirst King-Jones and lab technician Geanette Lam – and with geneticist Jean-Philippe Charles of the University of Bourgogne in Dijon, France.

From Egg to Larva, Pupa and Adult – Except When the Gene is Disabled

Fruit fly development starts when an egg is laid. Embryonic development proceeds within the egg for 24 hours. Then the egg hatches into a first-stage larva. At 48 hours, the larva molts – sheds the cuticle that forms its external or exoskeleton – and becomes a second-stage larva. The larva molts again at 72 hours to become a third-stage larva. At 120 hours – five days after the egg was laid – the larva enters metamorphosis and becomes a “prepupa” for 12 hours.

Then “the head pops out of the front end of the animal, and its legs and wings elongate,” Thummel says. “Now it is a true pupa, which is an immature adult. It essentially is an adult,” except its organs continue to form as it spends another 3.5 days inside its pupal case, which is like a cocoon but made of hard cuticle. Then – nine days after the egg was laid – the adult fly crawls out of the pupal case. Fruit flies have a two-month lifespan.

“Teenagers are very pupal – they go inside their shell and withdraw,” Thummel says. “Steroid hormones take over your kids, and they look very different and behave very different than they did previously. It happens more rapidly in insects, but they go through a transformation in very much the same way.”

DHR4 stands for Drosophila (the genus name for fruit flies) hormone receptor 4. The DHR4 gene carries inherited instructions for cells to make the DHR4 protein, which is a “nuclear hormone receptor.” Hormones like estrogen and testosterone attach to these receptors, which in turn attach to genes in cell nuclei to switch the genes on or off. Nuclear hormone receptors are found in all animals, including flies and humans, and are linked to maturation.

“So concluding that nuclear receptors are critical for the timing of onset of maturation [in flies] is a logical conclusion we could extend to humans,” Thummel says.

Thummel and colleagues raised fruit flies in vials containing a gelatinous food made of agar, cornmeal, molasses and yeast. The scientists disabled the DHR4 gene using two methods: conventional “knockout” technology and a newer method in which the gene was “silenced.”

By showing what happened when the gene was disabled, the researchers determined the normal gene has two key functions:

“How does an animal know when it is ready to mature – what determines that time?” Thummel asks. “That’s a big question of which we have poor understanding. This gene, DHR4, controls the time at which the animal begins to mature. It also plays an important role – along with many other genes – during maturation.”

How the Gene Works: Stop Eating and Grow Up!

“In insects, the larval period is exclusively devoted to growth,” says Thummel. “Insects are pests because, in their larval form, they consume many times their body weight in food, which can include our crops. … When babies are born, they are 7 or 8 pounds. By the time they are entering puberty, they are about 80 pounds. That’s about a 10-fold increase in weight. Innocent childhood is a period essentially dedicated to growth, much like insects.”

But while human teenagers often are voracious, fruit fly larvae wander away from food and stop eating when it’s time to mature into pupae.

The scientists concluded that the DHR4 gene controls the timing of metamorphosis and its initial stages by coordinating how hormones respond when a fruit fly larva has gained enough weight – and stored enough food – to begin the transformation to adulthood.

When the gene was deactivated, larvae did not know whether or not they had gained enough weight, so they entered metamorphosis one day early and began adulthood as prepupae that were 40 percent lighter than normal and 60 percent to 90 percent of normal length.

Thummel concludes: “Our life cycle consists of embryonic development, growth, maturation, aging and then death. We have a good handle on how embryonic development and aging work at a molecular level. But the transition from growth to maturation is poorly understood. If we can study this further in insects using them as a model for humans, because they have so many components that also are present in humans, we can gain some insights into how these processes – the timing of maturation and maturation itself – work in all higher organisms, including people.”