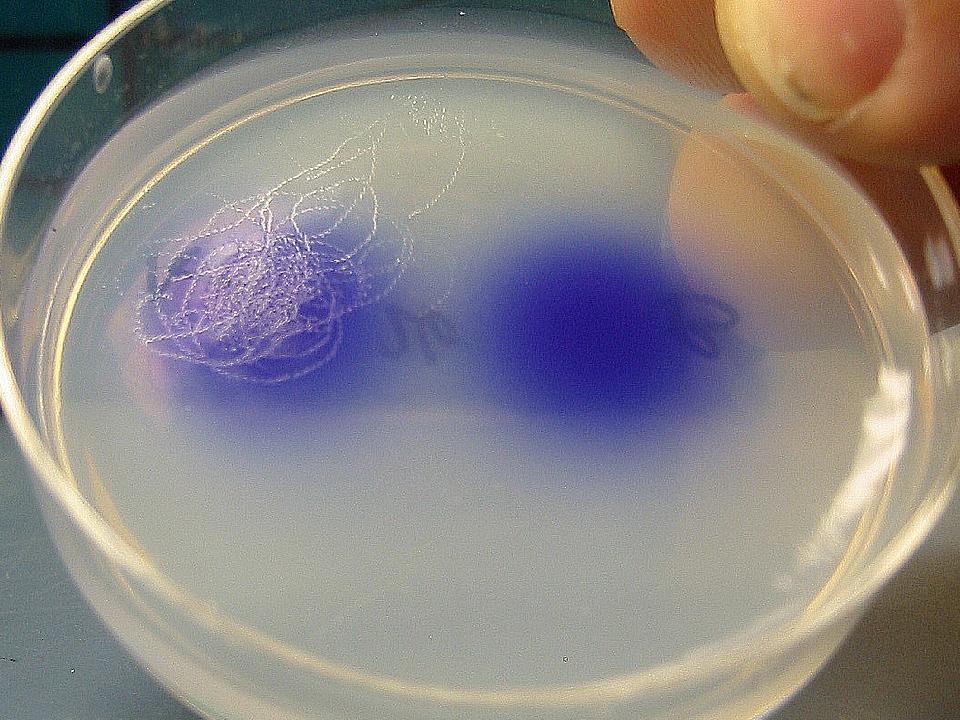 Oct. 25, 2007 – University of Utah biologists genetically manipulated nematode worms so the animals were attracted to worms of the same sex – part of a study that shows sexual orientation is wired in the creatures’ brains.

“They look like girls, but act and think like boys,” says Jamie White, a postdoctoral researcher and first author of the new study. “The [same-sex attraction] behavior is part of the nervous system.”

The study was published online Thursday, Oct. 25 in Current Biology, and will run in the journal’s Nov. 6 print edition.

“The conclusion is that sexual attraction is wired into brain circuits common to both sexes of worms, and is not caused solely by extra nerve cells added to the male or female brain,” says laboratory leader and biology Professor Erik Jorgensen, scientific director of the Brain Institute at the University of Utah and an investigator with the Howard Hughes Medical Institute.

“The reason males and females behave differently is that the same nerve cells have been rewired to alter sexual preference,” he adds. “Our conclusions are narrow in that they are about worms and how attraction behaviors are derived from the same brain circuit. But an evolutionary biologist will consider this to be a potentially common mechanism for sexual attraction.”

“We cannot say what this means for human sexual orientation, but it raises the possibility that sexual preference is wired in the brain,” Jorgensen says. “Humans are subject to evolutionary forces just like worms. It seems possible that if sexual orientation is genetically wired in worms, it would be in people too. Humans have free will, so the picture is more complicated in people.”

The Rules of Attraction – for Worms

Nematodes, or C. elegans, are millimeter-long (one twenty-fifth of an inch) worms that live in soil and eat bacteria. Because the same genes are found in many animals, nematodes, mice, zebrafish and fruit flies often are used as “models” for humans in research.

Nematode worms lack eyes, so attraction is based only on the sense of smell. There are no true females and only one in 500 nematodes is male. Most are hermaphrodites, with both male and female organs. Jorgensen and White loosely refer to hermaphrodites as females because they produce offspring.

“A hermaphrodite makes both eggs and sperm,” Jorgensen says. “She doesn’t need to mate [with a male] to have progeny,” but can fertilize her own eggs. “Most of the time, the hermaphrodites do not mate. But if they mate, instead of having 200 progeny, they can have 1,200 progeny.”

Nematodes are few and far between in soil. So natural selection favored hermaphroditic worms because when they found an abundant food source, they were able to feast and make babies even if no males were nearby, Jorgensen says.

Male nematodes must find hermaphrodites if they are to reproduce, and they find them by smelling their sex-attractant odors or pheromones.

The Mind of a Worm is Sexualized

Jorgensen says the study looked at three possibilities, namely, whether male attraction to hermaphrodites results from:

The answer was that male attraction involves the combination of both accessory and core nerve cells. The involvement of the core neurons was a surprise.

“What we show is that the shared nervous system [common between male and hermaphrodite] is broadly sexualized,” and sexual attraction can be changed by essentially flipping a genetic switch in that common brain, he adds.

The study involved these key experiments:

That suggests the core neurons – brain cells common to both the male and hermaphrodite brain – are sexualized, and that the extra CEM nerve cells found only in males are not necessary for sexual attraction even though they normally play a role in it.

“Normally there are eight sensory neurons in nematodes,” says White. “You can take away seven of the eight prior to sexual maturation, and as long as there is one left, he can still be sexually attracted. … Why would an organism that has only 383 nerve cells use eight of them for sexual attraction? It must be that the behavior is very important. There is redundancy. The system is flexible.”

The results show sexual orientation is wired into the brain in both sexes of worm.

To masculinize the brains of hermaphroditic worms, the researchers activated a gene named fem-3, but only in the nervous system. The fem-3 gene makes the body develop male structures such as a tail, which male worms use for copulation. With the gene active only in the brain, the hermaphrodites still had the same bodies and genitalia, but their brains were male, so they were attracted to other hermaphrodites.

When the scientists genetically altered hermaphrodites’ brains to change their sexual orientation, they crawled toward the pheromones of other hermaphrodites.

“People debate whether the brain is influenced by sexual hormones from the gonads or whether the behavior is derived from the brain alone,” Jorgensen says. “In this case, it’s clear the brain is sexualized. … The surprise was that sensory neurons found in the hermaphrodite brain are involved in sexual attraction in males.”

This news release and downloadable high-resolution photos are at: http://www.unews.utah.edu/p/?r=101207-1