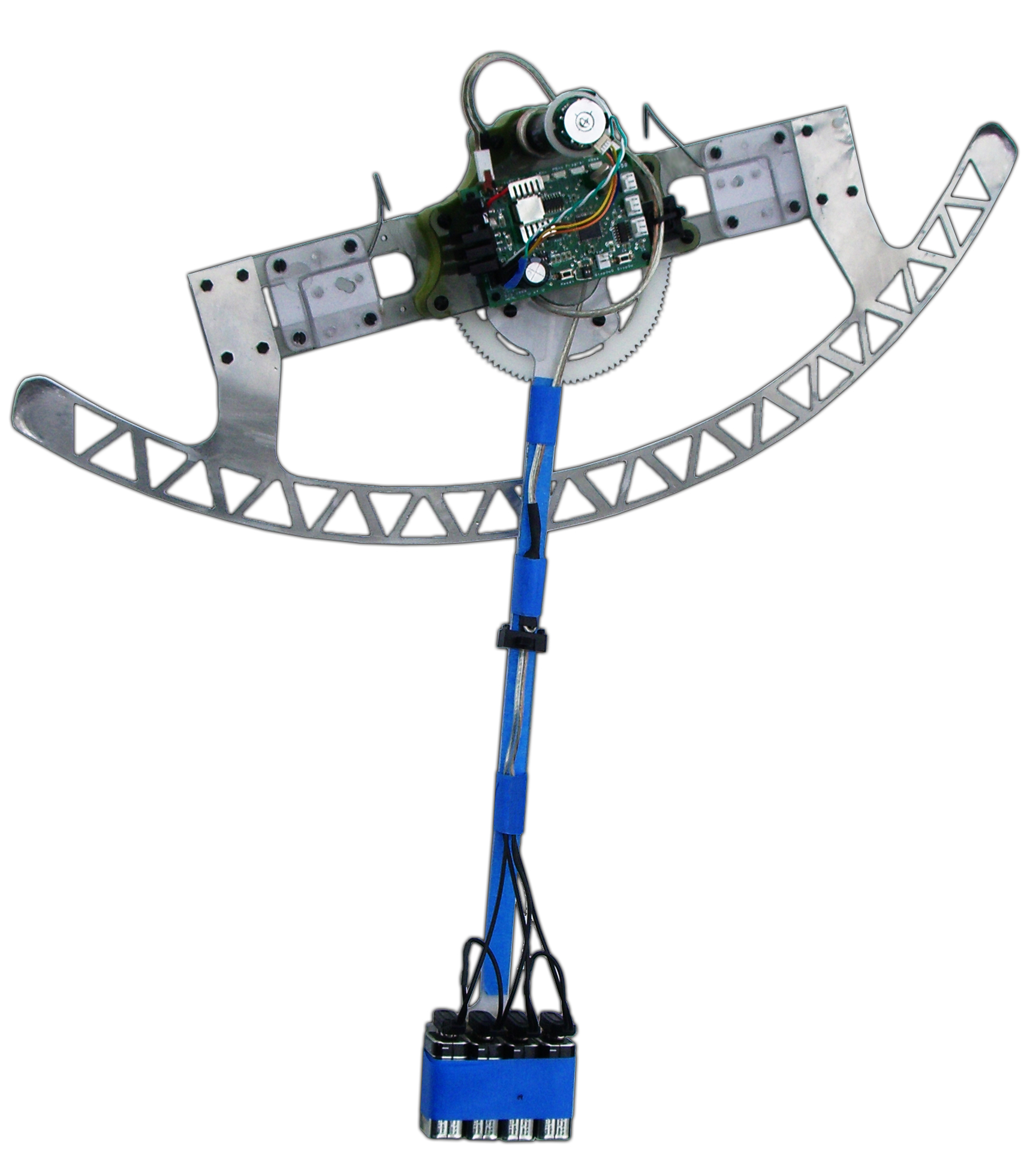 Aug. 5, 2010 — Wielding two claws, a motor and a tail that swings like a grandfather clock’s pendulum, a small robot named ROCR (“rocker”) scrambles up a carpeted, 8-foot wall in just over 15 seconds – the first such robot designed to climb efficiently and move like human rock climbers or apes swinging through trees.

“While this robot eventually can be used for inspection, maintenance and surveillance, probably the greatest short-term potential is as a teaching tool or as a really cool toy,” says robot developer William Provancher, an assistant professor of mechanical engineering at the University of Utah.

His study on development of the ROCR Oscillating Climbing Robot is set for online publication this month by Transactions on Mechatronics, a journal of the Institute of Electrical and Electronics Engineers and American Society of Mechanical Engineers.

Provancher and his colleagues wrote that most climbing robots “are intended for maintenance or inspection in environments such as the exteriors of buildings, bridges or dams, storage tanks, nuclear facilities or reconnaissance within buildings.”

But until now, most climbing robots were designed not with efficiency in mind, only with a more basic goal: not falling off the wall they are climbing.

“While prior climbing robots have focused on issues such as speed, adhering to the wall, and deciding how and where to move, ROCR is the first to focus on climbing efficiently,” Provancher says.

One previous climbing robot has ascended about four times faster than ROCR, which can climb at 6.2 inches per second, but ROCR achieved 20 percent efficiency in climbing tests, “which is relatively impressive given that a car’s engine is approximately 25 percent efficient,” Provancher says.

The robot’s efficiency is defined as the ratio of work performed in the act of climbing to the electrical energy consumed by the robot, he says.

Provancher’s development, testing and study of the self-contained robot was co-authored by Mark Fehlberg, a University of Utah doctoral student in mechanical engineering, and Samuel Jensen-Segal, a former Utah master’s degree student now working as an engineer for a New Hampshire company.

The National Science Foundation and University of Utah funded the research.

ROCR is a Swinger that Claws Its Way to the Top

Other researchers have studied a variety of ways for climbing robots to stick to walls, including dry adhesives, microspines, so-called “dactyl” spines or large claws like ROCR’s, suction cups, magnets, and even a mix of dry adhesive and claws to mimic wall-climbing geckos.

Now that various methods have been tried and proven for robots to climb a variety of wall surfaces, “if you are going to have a robot with versatility and mission-life, efficiency rises to the top of the list of things to focus on,” Provancher says.

Nevertheless, “there’s a lot more work to be done” before climbing robots are in common use, he adds.

Some previous climbing robots have been large, with two to eight legs. ROCR, in contrast, is small and lightweight: only 12.2 inches wide, 18 inches long from top to bottom and weighing only 1.2 pounds.

The motor that drives the robot’s tail and a curved, girder-like stabilizer bar attach to the robot’s upper body. The upper body also has two small, steel, hook-like claws to sink into a carpeted wall as the robot climbs. Without the stabilizer, ROCR’s claws tended to move away from the wall as it climbed and it fell.

“ROCR alternatively grips the wall with one hand at a time and swings its tail, causing a center of gravity shift that raises its free hand, which then grips the climbing surface,” the study says. “The hands swap gripping duties and ROCR swings its tail in the opposite direction.”

ROCR is self-contained and autonomous, with a microcomputer, sensors and power electronics to execute desired tail motions to make it climb.

“It pursues this goal of efficiency with a design that mimics efficient systems both in nature and manmade,” he says. “It mimics a gibbon swinging through the trees and a grandfather clock’s pendulum, both of which are extremely efficient.”

The study says: “The core innovations of ROCR – its energy-efficient climbing strategy and simple mechanical design – arise from observing mass shifting in human climbers and brachiative [swinging] motion in animals.”

Simulating and Testing a Climbing Robot

Before testing the robot itself, Provancher and colleagues used computer software to simulate ROCR’s climbing, using such simulation to evaluate the most efficient climbing strategies and fine-tune the robot’s physical features.

Then they conducted experiments, varying how fast and how far the robot’s tail swung, to determine how to get the robot to climb most efficiently up an 8-foot-tall piece of plywood covered with a short-nap carpet.

The robot operated fastest and most efficiently when it ran near resonance – near the robot’s natural frequency – similar to the way a grandfather clock’s pendulum swings at its natural frequency. With its tail swinging more slowly, it climbed but not as quickly or efficiently.

When the tail swung at two times per second, it was too fast and ROCR jumped off the wall, and was caught by a safety cord so it wasn’t damaged.

Provancher says the study is the first to set a benchmark for the efficiency of climbing robots against which future models may be compared. He says future work will include improving the robot’s design, integrating more complex mechanisms for gripping to walls of various sorts, such as brick and sandstone, and investigating more complex ways of controlling the robot – all aimed at improving efficiency.

“Higher climbing efficiencies will extend the battery life of a self-contained, autonomous robot and expand the variety of tasks the robot can perform,” he says.

Downloadable, uncaptioned video of the robot climbing is in the last 25 seconds here:

Video with captions may be downloaded here:

More information on ROCR, including the published paper, can be found here:

More information about the University of Utah’s College of Engineering: