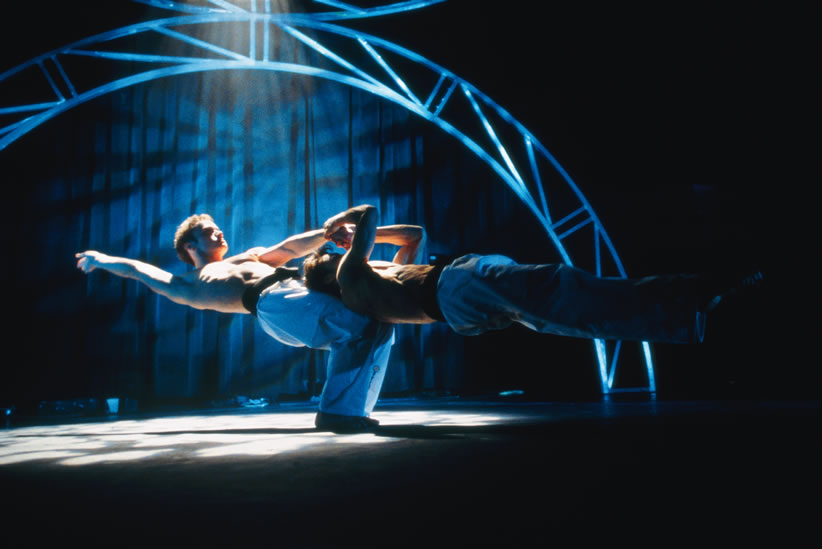 “A Few Good Men . . . DANCIN'” showcases the male dancer as the ultimate athlete and is billed as “the most athletic celebration ever to burst onto stage.” The New York Times noted, “The theatrical energy is intoxicating.” The production, just over two hours, darts from acrobatic movements to segments celebrating boxing and the martial arts, swing dance and Latin rhythms and dances honoring the body
and spirit. Music ranges from pop to rock and jazz, from salsa to swing and classical. Producer Jeffrey Finn notes, “This show has such universal appeal. It is a show everyone can enjoy. This production celebrates the best moments from the New York performances in 1999, 2001, 2002.”

The Kingsbury Hall performance of “A Few Good Men . . . DANCIN'” is the first stop in a 16-city tour that runs through April. The fifteen male cast members come from a variety of dance backgrounds-ballet, modern, Broadway, Cirque du Soleil and from the nation’s top dance companies, including the Joffrey School of Ballet, the New York City Ballet and Alvin Ailey Dance Theater.

As Finn comments, “The opening moments of the show are incredibly exciting-15 athletes on stage boxing to aerobic dance and movement. It’s a visceral experience.”