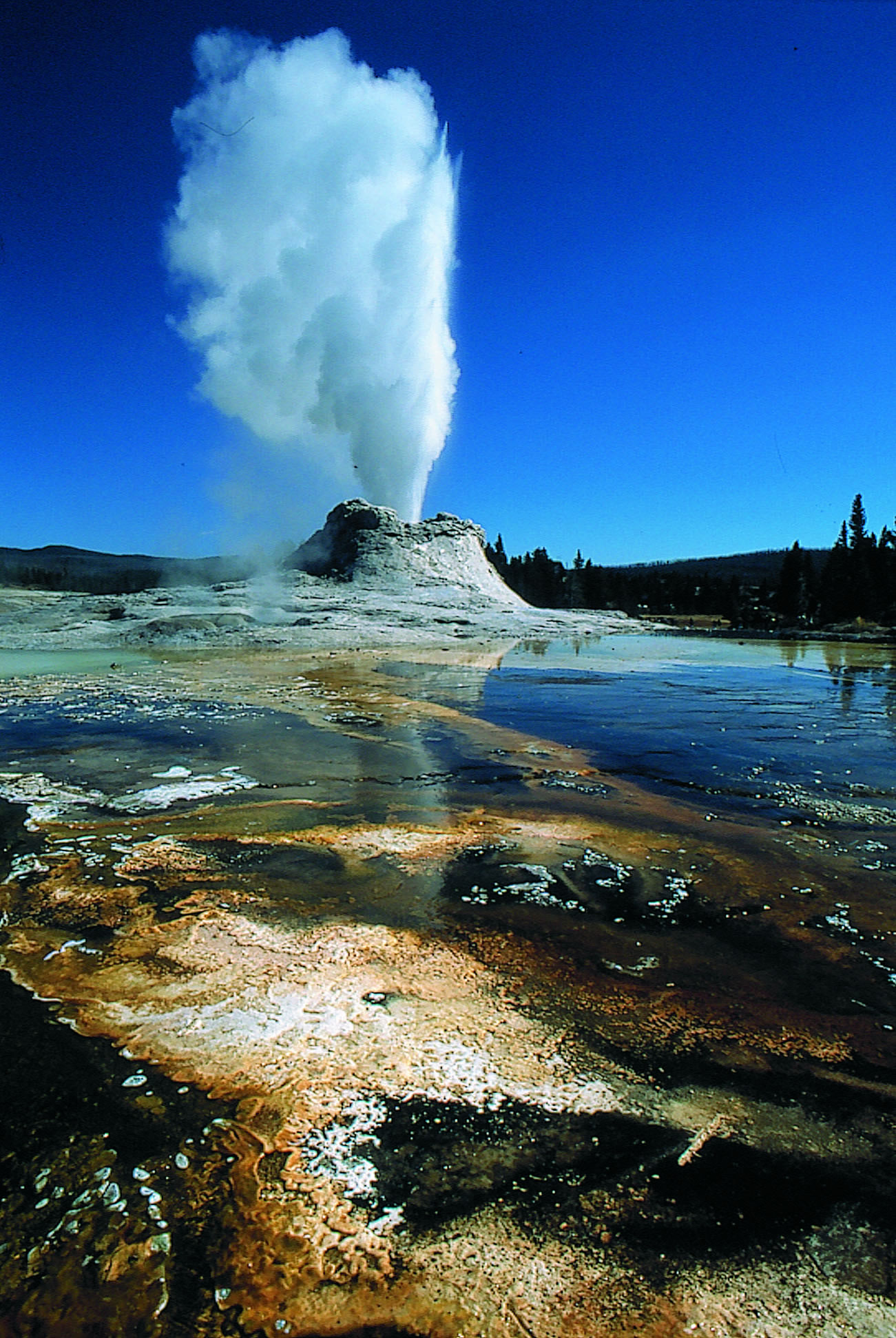 May 27, 2004 — A powerful earthquake that rocked Alaska in 2002 not only triggered small earthquakes almost 2,000 miles away at Wyoming’s Yellowstone National Park – as was reported at the time – but also changed the timing and behavior of some of Yellowstone’s geysers and hot springs, a new study says.

“We did not expect to see these prolonged changes in the hydrothermal system,” says University of Utah seismologist Robert B. Smith, a co-author of the study in the June issue of the journal Geology.

While other large quakes have been known to alter the activity of nearby geysers and hot springs, the Denali fault earthquake of Nov. 3, 2002, is the first known to have changed the behavior of such hydrothermal features at great distances, according to Smith and his colleagues. They say the magnitude-7.9 quake was one of the strongest of its type in North America in the past 150 years.

Less than 18 hours after the Denali earthquake in Alaska, Smith and colleagues at the University of Utah Seismograph Stations reported the major jolt had triggered more than 200 small earthquakes in Yellowstone – something widely reported by news media in the days following the quake.

Smith now says the triggered quakes at Yellowstone numbered more than 1,000 within a week of the Denali quake – if the count includes tiny temblors that were not “located,” meaning their epicenters and depths were not determined. He says the quakes ranged in magnitude from minus 0.5 to just under 3.0. (Tiny quakes have negative magnitudes because modern seismic equipment can detect quakes smaller than was possible when the logarithmic magnitude scales were devised.)

Most of the triggered quakes were centered near geysers and hot springs.

Scientists once believed that an earthquake at one location could not trigger earthquakes at distant sites. That belief was shattered in 1992 when the magnitude-7.3 Landers earthquake in California’s Mojave Desert triggered a swarm of quakes more than 800 miles away at Yellowstone, as well as other temblors near Mammoth Lakes, Calif., and Yucca Mountain, Nev.

The magnitude-7.5 Hebgen Lake, Mont., quake northwest of Yellowstone – a 1959 disaster that killed 28 people – triggered changes in Yellowstone’s geysers and hot springs, something not unexpected for a strong quake nearby.

Smith believes the Denali fault ruptured in such a direction – from northwest to southeast – that the brunt of its energy and its powerful surface waves were aimed southeast toward Yellowstone. As a result, the stresses rippling through the ground at Yellowstone were 200 to 300 times
greater than if the Denali quake’s waves were aimed elsewhere, he says.

“Several small hot springs, not known to have geysered before, suddenly surged into a heavy boil with eruptions as high as 1 meter [about 39 inches],” Smith and colleagues wrote in Geology. “The temperature at one of these springs increased rapidly from about 42 to 93 degrees Celsius [about 108 to 199 degrees Fahrenheit]” and became much less acidic than normal. “In the same area, another hot spring that was usually clear showed muddy, turbid water.”

Yellowstone has more than 10,000 geysers, hot springs and fumaroles (steam vents), and scientists monitored how often 22 of the geysers erupted during the winter of 2002-2003. Eight of the 22 “displayed notable changes in their eruption intervals” after the Denali quake, 10 showed no significant changes and the other four were too erratic in the timing of their eruptions to determine if the quake changed them, the researchers wrote. Of the eight that changed:

Most geysers returned to their normal timing days to months after the Denali quake.

Oddly, geysers affected by earlier nearby earthquakes – most notably Old Faithful and Grand Geyser in Upper Geyser Basin – were not affected by the Denali earthquake.

Scientists do not know if the strong surface waves from the Denali quake independently triggered Yellowstone’s small quakes and changes in geyser activity. Smith suspects not. He believes the Denali quake’s waves affected the geysers by changing water pressure in underground conduits or “pipes” that feed the geysers. Such changes – which in some cases would have made hot water “flash” explosively into steam – would have altered the pressure on adjacent faults, triggering small earthquakes nearby. That would explain why the quakes were clustered around geyser basins.

Why did some geysers erupt more often and others less often? The researchers believe that when the Denali quake waves rippled through Yellowstone, they jarred loose minerals that had sealed some underground hot water conduits.

In some cases, that allowed superheated, pressurized water to flow more freely to make geysers erupt more often. In other cases, the rupturing of subterranean mineral seals enlarged the size of the conduits supplying geysers, reducing water pressure so those geysers erupted less often. Smith speculates that yet other geysers remained unchanged because they did not have pent-up gas and water pressure and were not affected by the Denali quake’s surface waves.

The Denali quake also generated noticeable water waves in Seattle’s Lake Union, Louisiana’s Lake Pontchartrain and in swimming pools on the East Coast. It also triggered small quakes in California’s Geysers geothermal area, which is north of San Francisco, and in eastern California’s Long Valley, which, like Yellowstone, is a caldera, or giant volcanic crater created by cataclysmic prehistoric volcanic eruptions.

The Denali quake also triggered a few small quakes in Utah, and Smith says it is possible some of those quakes occurred near little-known hot springs along the Wasatch fault at the base of the Wasatch Range.

Such steam-and-hot water explosions in prehistoric times blasted out a hole that now is Mary’s Bay on Yellowstone Lake. One such explosion has occurred roughly every 1,000 years since the glaciers receded from Yellowstone roughly 14,000 years ago.

Nevertheless, a big quake near Yellowstone with its surface waves aimed the right way conceivably might “cause large hydrothermal eruptions,” says Smith. “I would hypothesize that is certainly possible.”