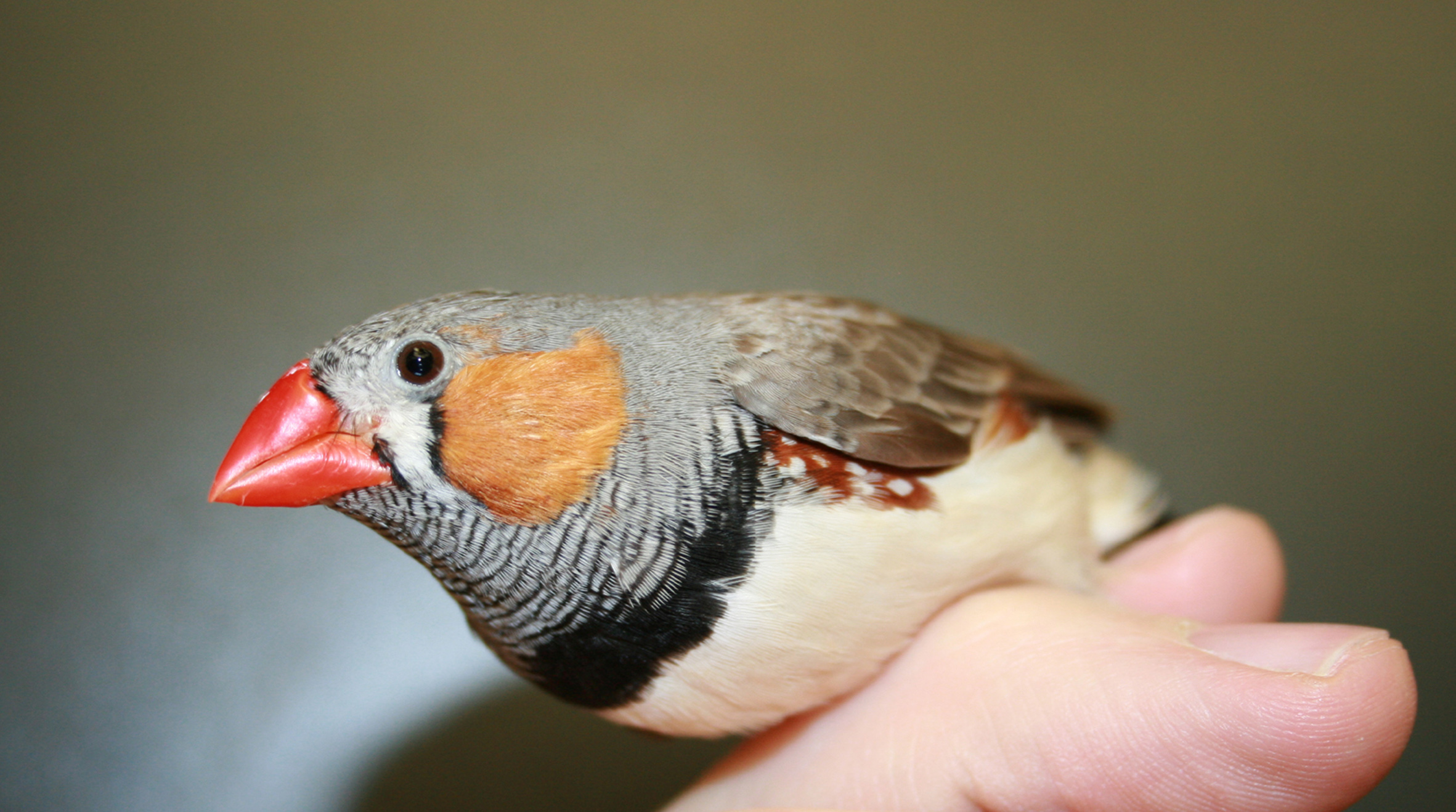 June 29, 2010 — Female zebra finches don’t sing but make one-note, low-pitch calls. Males sing over a wide range of frequencies. University of Utah scientists discovered how: The males’ stronger vocal muscles, not the pressure of air flowing through their lungs, lets them sing from the B note above middle C all the way to a whistle beyond the high end of a piano keyboard.

“You have two variables – air pressure and muscle activity – that act on the songbird’s vocal organ to regulate their song’s pitch. We found that the muscle activity is the key variable,” says Tobias Riede, first author of the new study set for online publication Tuesday in the Public Library of Science journal PLoS ONE.

Zebra finch males sing multisyllable songs with many notes. Males use song to defend their territory from competitors and attract mates. Songbirds that evolve more complex songs stand out in the crowd of potential Romeos.

“The amount of information conveyed in the song is greater and maybe more precise if you have a wider range of frequencies,” says Riede. “It also could be important for the male if the greater variability of his song’s pitch is better for attracting females.”

Something similar happens in classrooms: “If you are a teacher talking with a constant, monotonous voice, your audiences will be less likely to be focused for 45 or 60 minutes. But if you play with your pitch and volume, your audience will be more likely to listen.”

Songbird behavior also is relevant because “songbirds, like humans, must have tutors – parents – in order to learn what they sing or say,” Riede says. “That’s a feature only found in songbirds, humans and a few other mammals,” such as dolphins, whales and bats. (Songbird calls, unlike songs, are innate and not learned.)

Studying how muscles and other physical attributes allow birds to vary their song pitch helps scientists understand how birds learn to sing, he says.

Riede – a research associate at the National Center for Voice and Speech administered by the University of Utah – conducted the study with Utah researchers Franz Goller, a professor of biology, and John H. Fisher, an electronics engineer in the Department of Physiology. The study was funded by the National Institutes of Health.

Singing and the Single Songbird

In many species of animals, males and females are different in size – a characteristic called “sexual dimorphism.” Zebra finches, native to Australia, are used commonly in research. These small birds display sexual dimorphism in their vocal systems. Previous studies showed that the parts of the brain that control vocalization are larger, hold more nerve cells and are organized differently in males than in females.

In finches, the vocal organ is the syrinx. In humans, it is the larynx or voice box. The syrinx is tiny, measuring roughly one-eighth inch on each side. Previous studies also found that the vocal muscles, which control the syrinx, are twice the size in male zebra finches as in females, says Riede.

In the new study, Riede started by examining the cartilage scaffold that supports the syrinx, and the oscillating, sound-generating “labia” within the syrinx. The labia, made of soft tissue, are similar to the vocal folds in the human larynx. Both kinds of structure oscillate when pressurized air moves through them, producing sound.

The songbird syrinx is located where the trachea or windpipe splits into two bronchi that carry air to the lungs. There are two sets of labia – one set on each bronchus.

The researchers learned that the scaffold is bigger and the labia are shaped differently in male zebra finches compared with the female zebra finch syrinx.

“That makes sense,” says Riede. “A male needs a more robust scaffold to produce its song, particularly high-frequency notes for which the labia must be tensioned very tight by the vocal muscles pulling the scaffold, almost like the string of an instrument.”

But what factor lets the male zebra finch control its song frequency or pitch (perceived frequency) over almost the entire higher half of the piano keyboard?

Is the critical factor vocal muscle control of the labia in the syrinx, or the pressure of air flowing from the birds’ reservoir-like air sacs and through their lungs and syrinx?

So the scientists set out to study the relationship between the aerodynamic power – lung air pressure – that drives the sound, and the finches’ “fundamental frequency,” the basic rate at which the labia oscillate when they make sound. The fundamental frequency – along with resonance due to the size of the bird’s windpipe, throat, mouth and beak – contributes to what humans perceive as pitch in birdsong.

First, the scientists recorded sounds from six males and six females for two weeks. Then, each bird had a tube implanted under anesthesia into one of four air sacs that direct air through their lungs and syrinx. Each tube contained a sensor to measure air pressure. The birds were outfitted with tiny backpacks to carry transmitting equipment. A wireless recording system designed by Fisher allowed the birds to sing and fly freely while their air sac and thus lung pressure were measured. Their calls and songs again were recorded.

Next, the researchers operated on the anesthetized birds, cutting small nerves that control the vocal or syrinx muscles. Again, the birds could sing and fly freely as their calls and songs were recorded. But this time, they sounded different.

With the muscles unable to adjust tension of the sound-producing labia, the fundamental frequency of all the birds fell to about the same level. Their low-frequency calls become a bit lower in pitch. Males couldn’t produce high frequencies in their songs.

“The large muscles in males are the key variable. Air pressure plays only a small role in regulating frequency,” says Riede, who suspects the same of other songbirds. “They still were able to use the full air-pressure range they used before, but they were not able to put full tension on the labia anymore” and couldn’t reach higher pitches.

The Evolution of Complex Song

Birds that use muscles and some air pressure to control song pitch have “an evolutionary advantage over birds that do it only by pressure” because they impart more information by singing over a wide range of pitch, and because they can better adapt to changing environments, Riede says. For example, in a noisy environment, birds with wider frequency ranges have an advantage attracting mates because they can be heard over the noise.

Songbirds and a different group of birds, suboscines, have different designs of their syrinx. Goller previously studied kiskadees, which are suboscines, and found that air pressure, not muscle power, was the key factor regulating their frequency range.

The evolution from a passive, air-pressure-controlled syrinx to active, muscle-driven pitch control also apparently evolved in other animals. “It seems there is a similar evolutionary step in the larynx from reptiles to mammals,” says Riede. “The regulation of pitch by muscles is present in mammals but probably not, for example, in reptiles.”

Riede says evolution of vocal behavior in birds may help explain why birds have been able to evolve into some 10,000 species. More than half those species sing, he adds.

He says that use of muscles to control labia tension in the bird syrinx “is comparable to the mechanism in the human voice.”

In early mammals, development of wider frequency ranges could have been advantageous, says Riede, perhaps by allowing them to vocalize in frequencies reptiles couldn’t hear or by letting those who lived near streams be heard over the noise.