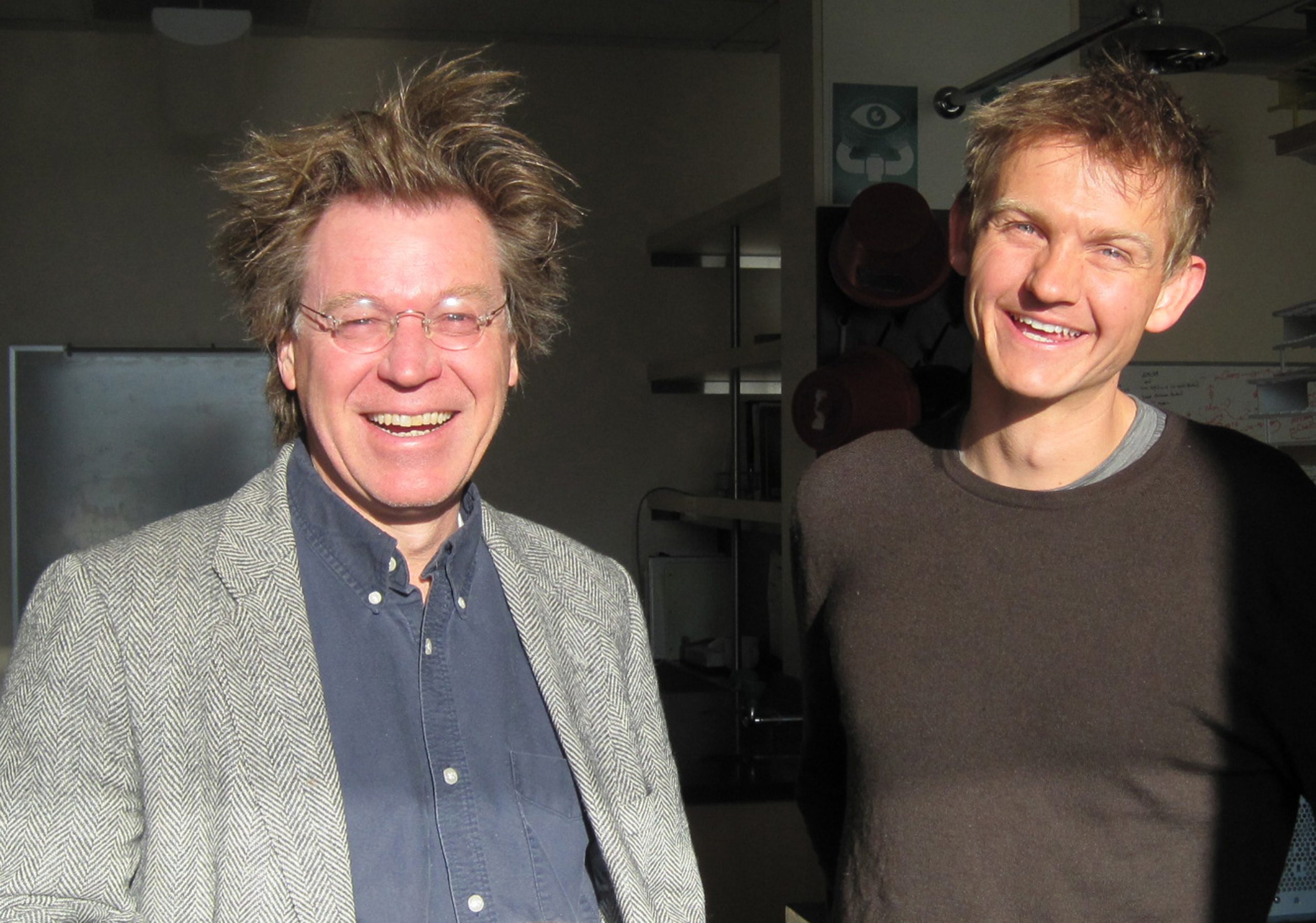 Jan. 10, 2008 – Muscles usually contract when a neurotransmitter molecule is released from nerve cells onto muscle cells. But University of Utah scientists discovered that bare subatomic protons can act like larger, more complex neurotransmitters, making gut muscles contract in tiny round worms so the worms can poop.

“There are relatively few molecules that serve as neurotransmitters to trigger electrical changes in cells. Protons are the only new members of this group in nearly 20 years,” says biology Professor Erik Jorgensen, scientific director of the Brain Institute at the University of Utah and senior author of the study in the Jan. 11 issue of the journal Cell.

While conventional neurotransmitters such as serotonin, dopamine and GABA are molecules made of many atoms, the new study revealed a surprise: Protons – which are single hydrogen atoms stripped of their electrons – are pumped out of a round worm’s gut by one kind of protein and then bind to receptor proteins on neighboring muscles, making the muscles contract so the worm defecates.

Not only did the researchers show protons can act like neurotransmitters, they identified the genes and proteins involved in the process in round worms, which are about 1 millimeter (a 25th of an inch) long and also are known as nematodes.

Previous research indicated the brains of humans and mice also have proton pumps and receptors to move protons between cells. The new study raises the possibility those protons may be transmitting nerve signals in the brain, says Jorgensen and study co-author Wayne Davis, a research assistant professor of biology.

“This is the first time we have found protons acting as transmitters,” Davis says. “It could be that these processes occur in humans. There are proton pumps present in intestinal cells and in the brain of humans and mice. Some of the pumps are thought to make acid for the gut to digest food. But why are proton pumps in the brain?”

Jorgensen adds: “Mice lacking the proton receptor cannot learn. It may be that the proton pump and receptor are required for learning,” and thus protons may act like neurotransmitters in the brain.

A Discovery from Constipated Worms
Atoms are made of nuclei that contain positively charged protons and uncharged neutrons, orbited by negatively charged electrons. So protons are among the smallest components of matter.

Previously recognized neurotransmitters such as serotonin (known for its role in preventing depression) and dopamine (involved in addiction to cocaine and other drugs) are more than 100 times larger than protons. That makes protons “the world’s smallest transmitter,” says Jorgensen, also a Howard Hughes Medical Institute investigator.

Acids burn because they contain high concentrations of protons, which already were known to help the stomach digest food.

The new study shows that at least in some circumstances, protons also may be used by cells to communicate. “Normally you think of proton concentration increasing to digest food,” Davis says. “Now we see the cell is using these protons to communicate. The protons are acting like a word in a language that cells use to talk to each other.”

When the study began, nobody thought a new transmitter would be identified. Instead, the researchers were trying to understand how worms poop. Why? “Eating, moving, having sex and pooping are common things that all animals do,” says Davis.

Nematodes, or Caenorhabditis elegans, have about 1,000 cells and are simple animals studied by researchers worldwide. Nematodes have many of the same tissues – nerves, muscle and intestine – that are found in humans, and most of the same genes, making the worm a model for studying human biology.

Defecation in round worms is surprisingly complex. The animal has muscle contractions every 50 seconds that result in expulsion of intestinal contents. The 50-second cycle is an example of a biological clock, like those that regulate wake-sleep cycles and many other behaviors in animals.

“We were interested in teasing apart the components required for [defecation] clock function,” says Nix. “To do that we searched for mutations that affected the clock.”

By exposing worms to chemicals that altered their DNA, the researchers found mutant worms that couldn’t defecate or had trouble doing so. “The worms are constantly eating, so if they don’t poop regularly, they become very constipated,” says Nix.

In the round worm’s tail, muscles surround the tube-shaped intestine, and there is a fluid-filled space between the intestine and the surrounding muscles. The muscles contract to help the worm defecate. The researchers identified two different gene mutations that prevented such contractions.

Proteins and Protons Propel Pooping Process
One gene, named pbo-4 (for posterior body contraction), produces a protein that pumps protons out of the intestine, acting “like a revolving door where sodium is allowed in [the gut] while protons go out [of the gut] into the fluid-filled space that is very close to the surrounding muscle,” says Davis.

The second gene, pbo-5, makes a receptor protein on the muscles that surround the gut. After the protons are released from the intestine, they bind to the receptor protein.

The researchers knew protons were being released from the gut because they could see their effects through a microscope.

They bred worms with a green fluorescent protein that loses it color when many protons are present. The adult worms had the green protein in the fluid-filled space between the intestine and the surrounding muscle – a space that Ernstrom says “is approximately 1,000 times smaller than the width of a hair.”

The scientists were able to show protons were pumped from the intestinal wall and to the surrounding muscle because, under a microscope, the fluid-filled space became less green. In mutant worms lacking the proton pump, the green remained unchanged, showing that protons were not released from the gut into the space.

“To prove that it is the protons triggering the contraction, we want to supply the protons ourselves,” says Davis. “A fine needle filled with protons was used to inject protons in the space between the muscle and gut. We can bypass the gut and fool the muscle into thinking the gut is releasing protons, and the muscle contracts.”

The study was funded by the National Institutes of Health and the Howard Hughes Medical Institute.