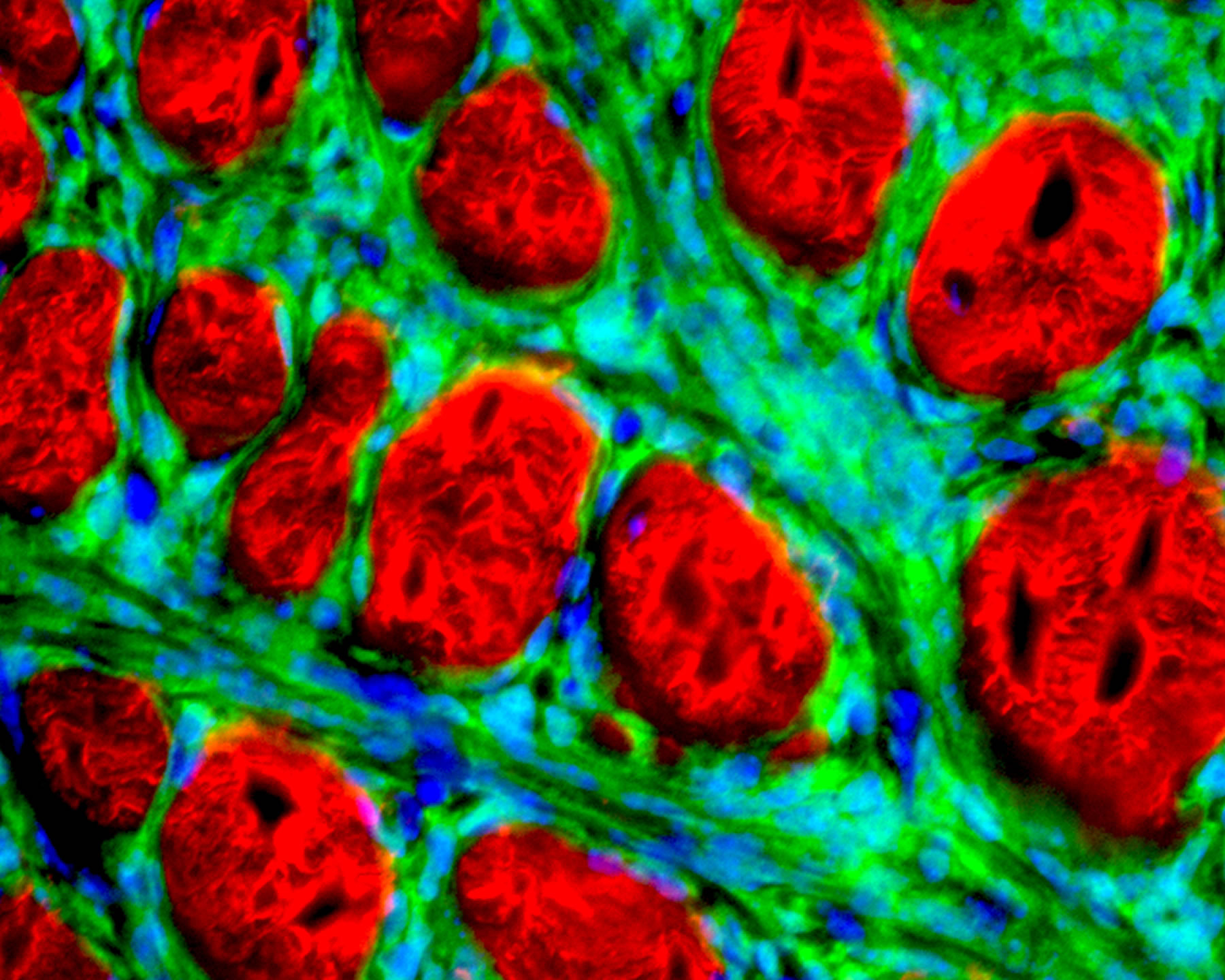 April 9, 2007 — University of Utah geneticists have engineered mice that can develop synovial sarcoma – a significant early step toward developing new treatments for the aggressive, deadly cancer that most often kills teenagers and young adults.

The genetically engineered, cancer-stricken mice were used to determine that synovial sarcoma develops in muscle cell precursors known as myoblasts, the researchers report in the April issue of the journal Cancer Cell, which features the study on its cover.

The cancer once was thought to arise in synovium, the membrane lining joints like the knee and elbow. That idea fell from favor in recent years, and until now, scientists have not known in which cells the cancer originated.

“The only way to develop a therapy that is specific for this cancer is to understand how it works, and the mouse gives you that possibility,” says the study’s leader, Mario R. Capecchi, professor and co-chair of human genetics at the University of Utah School of Medicine and an investigator with the Howard Hughes Medical Institute.

But as is the case with many basic research advances, Capecchi says a treatment for synovial sarcoma based on the new finding remains at least a decade away. Nevertheless, there also is a wider promise.

“First you can design and evaluate new treatments for this specific cancer and, second, you can design therapy for sarcomas in general” because they share many common features with synovial sarcoma, says the study’s first author, Malay Haldar, a human genetics graduate student who works in Capecchi’s laboratory.

Other authors of the University of Utah study are oncologist Stephen L. Lessnick, an assistant professor of pediatrics; Jeffrey D. Hancock, a fellow in pediatric hematology-oncology; and physician Cheryl Coffin, professor and head of pediatric pathology.

Soft-tissue sarcomas are a group of cancers that develop in any part of the body in soft tissues like fat, nerve, muscle, deep skin tissue, blood vessels or fibrous tissues around joints. They are different than osteosarcomas, which grow in bone.

Synovial sarcoma accounts for 7 percent to 10 percent of soft-tissue sarcomas, and usually develops in the arms or legs, particularly near the knees or ankles but also near the hips or shoulders. It also can occur on the torso or neck. It often metastasizes, spreading to the lungs, lymph nodes and bone marrow.

Even though it most often strikes young adults and adolescents, the most famous synovial sarcoma patient probably was actor Robert Ulrich – star of such TV shows as “Spenser for Hire,” “Vega$” and “Soap” – who died of the cancer at age 55 in 2004.

Haldar says there are about 900 new cases of synovial sarcoma each year in the United States. Five-year survival rates vary wildly in different reports, but as few as 25 percent of patients survive five years. Many synovial sarcomas already have spread by the time they are diagnosed, and about 80 percent of those patients die, Capecchi says.

Surgery is the most common treatment to remove a synovial sarcoma that has not spread; chemotherapy and radiation are considered less successful.

All synovial sarcomas (but not other sarcomas) contain what is known as a SYT-SSX fusion gene, a mutant gene created by “translocation,” which occurs when two chromosomes break due to sunlight, oxygen radical chemicals or other causes of DNA damage. Part of one chromosome combines with part of the other.

In synovial sarcoma, the SYT gene on chromosome 18 breaks and part of it combines with part of a broken SSX gene from the X chromosome, either SSX1 or SSX2. The SYT-SSX1 fusion gene results in synovial sarcoma that progresses more quickly and is deadlier, but the study involved SYT-SSX2 because that gene was the first Haldar was able to extract from a human tumor, which was difficult to obtain.

A Mouse with Human Cancer

To learn where synovial sarcoma originates, Capecchi, Haldar and colleagues genetically engineered mice so that the researchers could activate the SYT-SSX2 fusion gene in various muscle cells or their precursors. They suspected some sort of muscle cell or precursor cell was where synovial sarcoma originates because “these tumors arise near joints, and the other thing you have near joints is muscle,” Capecchi says.

The researchers used an enzyme named Cre to activate the human cancer-causing SYT-SSX2 fusion gene in the precursor and muscle cells. Cre “is a switch that allows us to turn the fusion gene on and off when and where we want it,” says Capecchi.

In less mature muscle cell precursors, the SYT-SSX2 gene disrupted normal development of mouse embryos, and they died, but there was no cancer.

When the cancer gene was activated in mature muscle cells, cancer did not appear, but there was myopathy or muscle damage. Capecchi says that may spur research to learn if SYT-SSX genes play a role in any of the numerous forms of myopathy.

The researchers discovered that when the SYT-SSX2 fusion gene was expressed or activated in myoblasts, the cells became cancerous 100 percent of the time. Myoblasts are not stem cells, which can become any kind of tissue, but are precursor cells that are committed to becoming muscle cells.

“What’s surprising here is that the fusion gene itself is sufficient to start the cancer process so that every mouse gets the cancer,” Capecchi says.

The study also indicated that myoblasts become cancerous with help from some favorable, yet-unidentified factor in nearby joint cartilage.

Based on the findings, Capecchi believes myoblasts are the likely source of synovial sarcoma in humans. “Usually what we learn in mice is applicable to humans, but we have to prove it,” although such experiments could not be conducted ethically in people, he says.

Nevertheless, the tumors in mice with the SYT-SSX fusion gene “strongly resemble human synovial sarcoma” in appearance, tumor architecture and proteins produced by genes in the cancer cells, Capecchi says.

“They look the same and they also are expressing the same set of genes. It says the human tumor and the mouse tumor are similar.” Capecchi says that is why mice with synovial sarcoma can serve as a model for humans when testing possible new treatments.

Chromosome translocations probably create fusion genes quite often, but if the SYT-SSX fusion gene forms too early or too late in muscle cell development, cancer does not develop. “You have to hit the right place in the right time to get the tumor,” Capecchi says.

The new study shows the SYT-SSX fusion gene is needed to initiate synovial sarcoma. Capecchi says he plans to study whether the gene must continue working for the tumor to keep growing and eventually spread. If that proves true, the SYT-SSX gene itself would be a target for possible new drugs to treat synovial sarcoma.

But other genes that are overactive in synovial sarcoma tumors were identified in the new study, and they also may be potential targets for anticancer medicines, he adds.