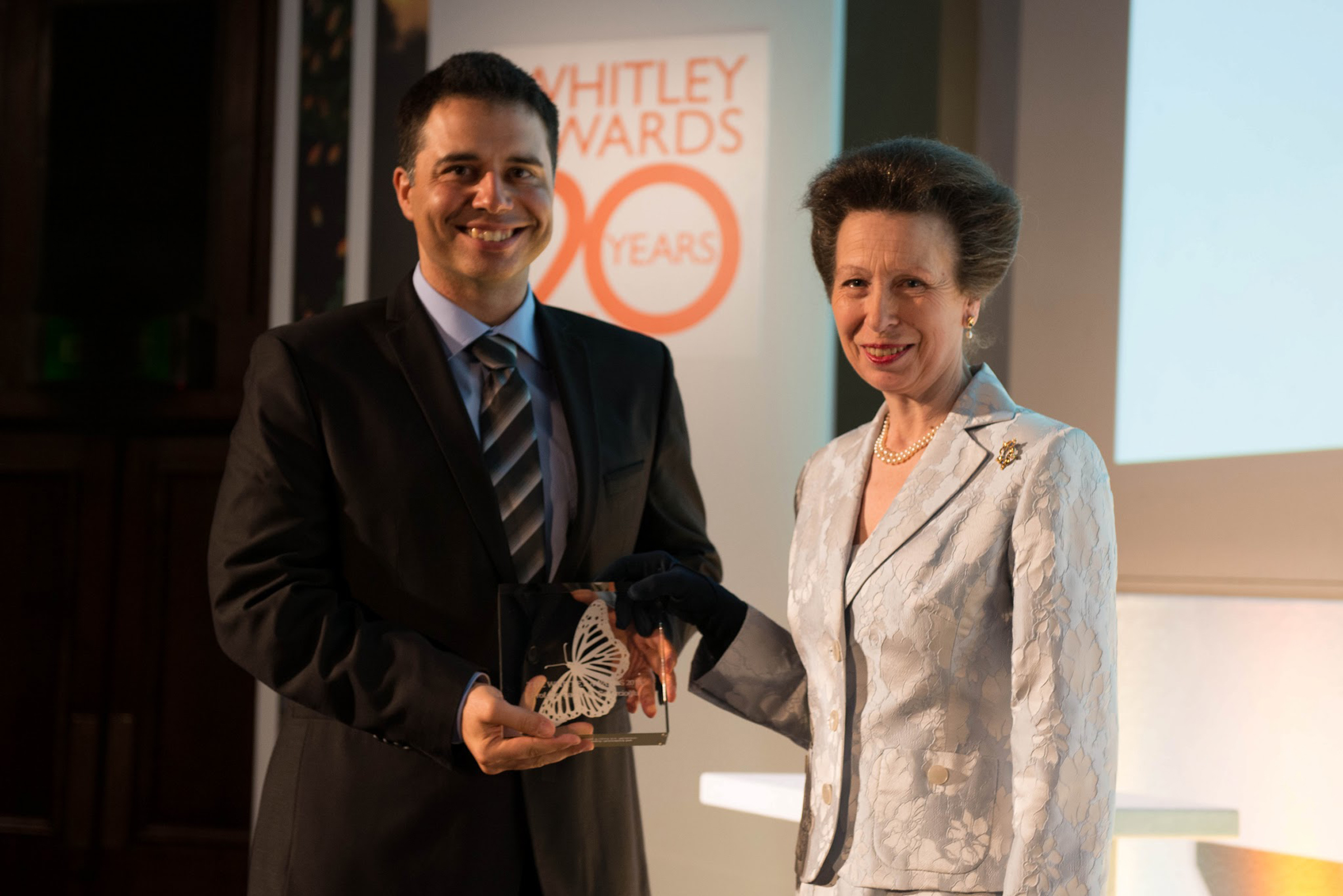 May 3, 2013 – For the second time in five years, the United Kingdom’s Princess Anne handed the prestigious Whitley Gold Award for conservation to Çağan Şekercioğlu. The University of Utah biologist gifted the princess with mulberry molasses and dried apricots from wetlands threatened by dam construction in his native Turkey.

Şekercioğlu, 37, an ornithologist and conservation biologist, is the first person to win the Whitley Gold Award twice from the Whitley Fund for Nature. He previously won in 2008 while working at Stanford University.

Şekercioğlu and seven winners of the 2013 Whitley Awards (the non-gold variety) accepted their honors Thursday night, May 2 during a ceremony at the Royal Geographic Society in London.

The ceremony with Princess Anne was brief, but during a reception with the award winners, Şekercioğlu said the princess “remembered me from the 2008 Whitley Gold Award and from her Buckingham Palace birthday party in 2010, and said, ‘Hi, we meet again. Congratulations.’”

“I gave her mulberry molasses and dried apricots from Turkey’s Aras River wetlands that the government is planning to drown under a dam,” he said. “They are threatened by a dam and we started the www.savearas.org campaign to save them. I told Princess Anne, ‘This is the best mulberry molasses in Turkey, but all these mulberry trees may be gone if we cannot save the Aras River bird paradise.’”

“We talked about dam projects and how they destroy rivers around the world,” Şekercioğlu said. “I explained how the apricots and mulberry molasses were straight from the Aras bird paradise, from the orchard of Aunt Zeynep, who sometimes cooks for us and whose house we have our guests stay in as a homestay. Princess Anne said, ‘Sounds like a great bed and breakfast,’ and said something about molasses and apricots being great for breakfast.”

Şekercioğlu, who moved to Utah in 2010, first won the Whitley Gold Award in 2008 for his work to safeguard bird-rich wetlands around northeast Turkey’s Kuyucuk Lake, home to 40,000 birds from 227 species. He won the new award for convincing Turkey’s government to create that nation’s first wildlife corridor for large carnivores such as wolves, brown bears and Caucasian lynx.

A Whitley Fund for Nature news release with details about Şekercioğlu’s work is at:
http://whitleyaward.org/2013/05/whitley-gold-award-donated-by-the-friends-of-whitley-fund-for-nature-winner-cagan-sekercioglu-turkey/

Details on Şekercioğlu’s campaign to save Turkey’s Aras River wetlands are at:
http://www.savearas.org/