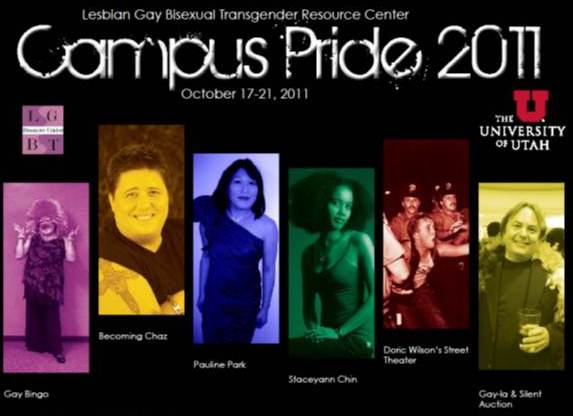 The center, located on the fourth floor of the Olpin Union Building, underwent a remodel over the summer to provide a larger, more expansive space for the many students who use it as a meeting place, hangout spot and informational hub. A“Grand Re-Opening” of the center at 3 p.m. Monday Oct. 17 will launch the week of festivities.

On Wednesday, Oct. 19, nationally-renowned gender rights activist Pauline Park will give the week’s keynote address, “Transgender Inclusion in Academia,” in the Union Ballroom. Later that day, Broadway performer Staceyann Chin will perform at the Babcock Theatre at 6 p.m.

The week will culminate with the annual Gay-La celebration dinner and silent auction Friday, Oct. 21 at 6:00 p.m. at the IJ & Jeanné Wagner Jewish Community Center, 2 North Medical Drive. Proceeds from the event will go to support programs at the LGBT Resource Center. Pride Week events also include screenings of the documentaries, “La Mission” and “Becoming Chaz,” panel discussions, Safe Zone Trainings and the popular Gay Bingo with Ruby Ridge & Friends.

All events during Pride Week are open to the public. For a full schedule and more information about the University of Utah Pride Week celebration, or to purchase tickets to the Gay-La dinner and silent auction, call 801-587-7973 or visit www.sa.utah.edu/lgbt.

Pauline Park is a gender rights activist who has written widely on LGBT issues. She is the chair and co-founder of the New York Association for Gender Rights Advocacy, a statewide transgender advocacy organization and is president of the board of directors of Queens Pride House, which she co-founded in 1997. In 2005 she became the first openly transgendered grand marshal of the New York City Pride March. She was the subject of “Envisioning Justice: The Journey of a Transgendered Woman,” a documentary about her life and work by documentarian Larry Tung, which premiered at the New York LGBT Film Festival (NewFest) in 2008.

Staceyann Chin is widely known as co-writer and original performer in the Tony award winning, Russell Simmons Def Poetry Jam on Broadway. She has performed at the Nuyorican Poets’ Café, one-woman shows Off-Broadway and conducted writing workshops in Sweden, South Africa, and Australia. Chin’s three, one-woman shows – “Hands Afire,” “Unspeakable Things” and “Border/Clash” – all opened to rave reviews at the Culture Project in New York City. A Jamaican national, Chin was featured on the “Oprah Winfrey Show,” where she spoke candidly about her experiences of growing up on the island and the dire consequences of coming out.

Pride Week at the University of Utah celebrates the contributions of LGBT students, faculty and alumni who enrich the culture of the campus and community. Together, we work to create an educational environment that fosters greater understanding and respect for all people.