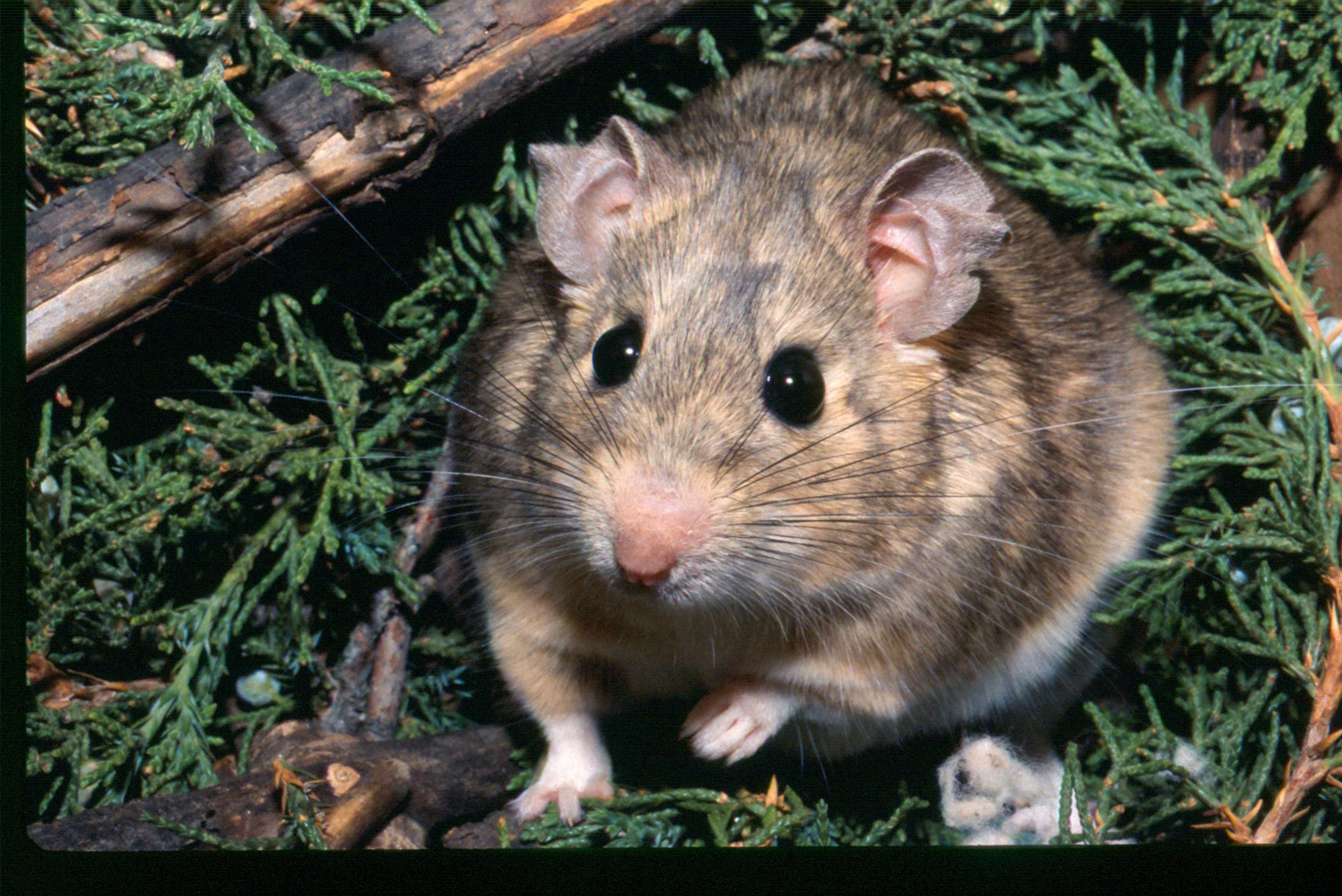 April 6, 2009 — As the U.S. Southwest grew warmer from 18,700 to 10,000 years ago, juniper trees vanished from what is now the Mojave Desert, robbing packrats of their favorite food. Now, University of Utah biologists have narrowed the hunt for detoxification genes that let the rodents eat toxic creosote bushes that replaced juniper.

“It was either eat it or move out,” says biology Professor Denise Dearing, senior author of the study, published online Tuesday, April 7 in the journal Molecular Ecology.

During the study, eight packrats – also known as woodrats – were captured from each of two western regions: the Mojave Desert and the cooler Great Basin. Rats from both areas were fed rabbit chow mixed either with creosote or juniper. The scientists then scanned the rodents’ genetic blueprints to look for active genes known as “biotransformation genes” because they produce liver enzymes to detoxify the poisons in creosote and the less-toxic juniper.

“We found 24 genes in woodrats from the Mojave Desert that could be key in allowing them to consume leaves from creosote bushes,” she says. “The leaves are coated with a toxic resin that can comprise up to 24 percent of the dry weight of the plant.”

Dearing says she conducted the study because “we don’t really understand how wild animals process their diets, and how herbivores can feed on really toxic diets. If we can understand it, we may be able to understand how they will deal with climate change.”

For example, “the toxins in creosote could respond to increases in [atmospheric] carbon dioxide,” which causes global warming, she adds. “The plants may make more toxins under elevated CO2 conditions because these toxins are built from carbon atoms.”

Dearing says once the actual creosote-detoxification genes are pinpointed among the 24 candidates identified by the new study, those genes someday might be used to modify cattle, sheep or other grazing animals so they could eat creosote.

“The Mojave is huge, and there aren’t many things that eat creosote,” she says.

Dearing conducted the study with Jael Malenke, a postdoctoral fellow in biology at the University of Utah, and Elodie Magnanou, who held the same position until March 2008 and now is at Pierre and Marie Curie University in France.

The study was funded by the National Science Foundation.

‘A Tale of Two Poisons’

Human plant consumption is healthy, thanks to agriculture, which breeds toxins out of plants we eat, Dearing says. People also adapted genetically – like the woodrats – to certain changes in their diets. There are extra genes for starch-digesting enzymes in people with high-starch diets (potatoes, rice, grains), such as Japanese and Europeans.

“Eating for [non-human] herbivores is really dangerous,” Dearing says. “Most plants make toxins to prevent from being eaten.”

She says little is known about how plant-eating vertebrate animals disarm plant defenses. Until the advent of genetic techniques to scan an animal’s genome, or genetic blueprint, “we could only look at one, two or three enzymes at a time. Much more work has been done on insects because they are pests and eat a lot of the plants we eat.”

Wood creosote is a resin that comes from creosote bushes or high-temperature treatment of certain other woods, and once was used in laxatives, cough medicine and disinfectants. It is different than the more commonly known coal tar creosote, which is made of petrochemicals and is the world’s most widely used wood preservative, applied to power poles, railroad ties and bridge timbers.

Even with detoxification genes, creosote bush is so toxic the packrats can eat only so much. When they eat it exclusively, in winter, they actually lose weight. They gain weight in the spring when they also eat annual plants and grasses, yucca and other plants. Juniper also is toxic, but not as much as creosote bush.

Before creosote invaded the Southwest from South America, woodrats ate juniper throughout what is now the Great Basin of Utah and Nevada and the Mojave Desert of southwestern Utah, southern Nevada and inland southeastern California.

But things were changing as the last Ice Age waned. “As the glaciers were receding, creosote bush was invading,” says Dearing. “The Southwestern deserts were being formed as the land was becoming hotter and drier, and creosote bush replaced juniper trees in those areas.”

Woodrats also are known as packrats because they build yard-wide, 2-foot-tall “middens” using twigs, branches, pottery shards and other debris. The middens are typically above ground – under juniper trees in the Great Basin and yucca in the Mojave.

Because ancient middens are preserved, scientists have analyzed their contents, which included juniper pollen, showing packrats throughout the Southwest ate juniper before the climate warmed. Creosote pollen shows the bushes had spread through the Mojave by 10,000 years ago.

“I see this as a tale of two poisons or a tale of two diets – two populations of the same species that feed on very different staple foods: creosote and juniper,” says Dearing. “It’s like suddenly having your food coated with a different poison than you are used to. It’s interesting to see the response of these animals to a natural climate change event where they were forced to change their diet and adapt to a new type of toxin.”

Dearing says that as creosote invaded, some woodrats already had genes to let them eat creosote or there was a mutation in existing detoxification genes that allowed creosote consumption. Over time, Mojave woodrats with those genes were more likely to survive on creosote, while those in the Great Basin stuck to juniper.

In the new study, Dearing and colleagues used microarrays designed to scan laboratory rat genes – a glass slide containing tiny fragments of some 40,000 genes. The fragments bind to their counterparts in a sample of genetic material – in this study, an extract from woodrat liver.

“We never have been able to survey this number of detoxification genes at once,” Dearing says. “Prior to the advent of these microarrays, there haven’t been techniques where we could look at detox genes comprehensively.”

The microarray analysis shows which genes in the woodrats have been “expressed” or activated to produce enzymes that make toxins in creosote and juniper water soluble and thus easily excreted by the rodents.

Eight woodrats from each region were fed diets in which rabbit chow was treated either with creosote resin or with finely ground juniper leaves. Then the microarrays were used to determine which genes had been activated on each diet in each group of packrats.

With the 24 candidate genes, “we now have to check every one of these genes to see which are important in detoxification of creosote,” says Dearing.