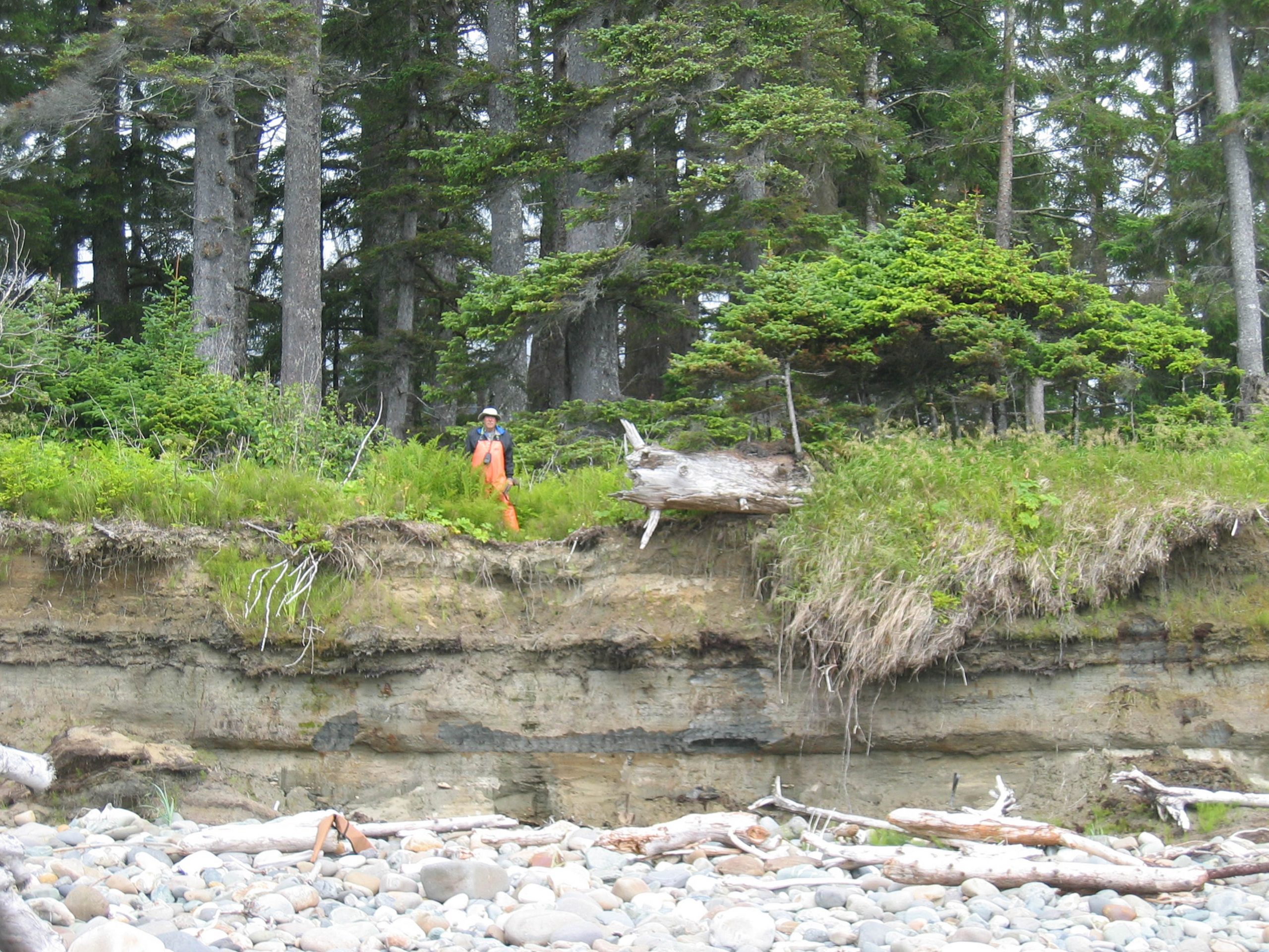 July 20, 2009 — A study co-authored by University of Utah geologist Ron Bruhn discovered that gigantic earthquakes in Alaska 1,500 and 900 years ago ruptured multiple fault segments, suggesting those quakes and related tsunamis were worse than the 1964 Good Friday earthquake in Alaska — the second largest quake ever recorded.

Below is a news release on the study issued by Great Britain’s Durham University, the home base of study coauthor Ian Shennan.

Bruhn is away from Utah this summer but news media may contact him on his cell phone, listed below.

“The tsunami originating because of the magnitude-9.2 great Alaskan earthquake of 1964 is the most devastating seismic sea wave to impact the northwestern coast of the U.S. in historical time. … We have found geological evidence indicating that about 900 and 1,500 years ago, two great earthquakes that ruptured the same fault as in 1964 occurred, but that these ruptures continued along the plate tectonic boundary much farther east than in 1964.”

“The area of the ruptures was about 15 percent greater than that in 1964, generating even greater magnitude earthquakes. But perhaps as or more important, the ruptures spread eastward and southward beneath the wide continental shelf into the eastern Gulf of Alaska. This indicates the potential to generate even a larger tsunami or ‘seismic induced sea wave’ than generated in 1964.”

“The 1964 tsunami spread southward along the coast of British Columbia, Washington, Oregon and into northern California, causing damage and even deaths as far south as Crescent City, Calif. Our work suggests that the northeastern end of the Aleutian megathrust has greater earthquake magnitude and tsunami potential than previously thought because the 1964 event did not rupture the full extent of the subduction interface or fault system.”

The potential for a huge Pacific Ocean tsunami on the West Coast of North America may be greater than previously thought, according to a study of geological evidence along the Gulf of Alaska coast.

The research suggests that future tsunamis could reach a scale far beyond that suffered in the tsunami generated by the great 1964 Alaskan earthquake. Official figures put the number of deaths caused by the earthquake at around 130: 114 in Alaska and 16 in Oregon and California.

While the popular conception is that all but nine of the deaths were due to tsunamis, the authors of the new study note that the true tsunami — the wave caused by regional, quake-related seafloor movement — killed 35 people, including those in Oregon and California. The more than 80 other deaths in Alaska were due to huge, localized waves and other effects caused by underwater landslides.

The 1964 Alaskan earthquake was the second biggest recorded in history, measuring 9.2 on the “moment magnitude” scale that most accurately measures the energy released by major and great quakes. It triggered a series of massive waves with run up heights of as much as 41.7 feet in the Gulf of Alaska region and 170 feet in the Shoup Bay submarine slide in Valdez Arm.

The study suggests that rupture of an even larger area than the 1964 rupture zone could create an even bigger tsunami. Warning systems are in place on the West Coast of North America, but the findings suggest a need for a review of evacuation plans in the region.

The research team from Durham University in the United Kingdom, the University of Utah and Plafker Geohazard Consultants, gauged the extent of earthquakes over the last 2,000 years by studying subsoil samples and sediment sequences at sites along the Alaskan coast. The team radiocarbon-dated peat layers and sediments, and analysed the distribution of mud, sand and peat within them. The results suggest that earthquakes in the region may rupture even larger segments of the coast and sea floor than was previously thought.

The study was published in the academic journal Quaternary Science Reviews and funded by the National Science Foundation, National Aeronautics and Space Administration and the U.S. Geological Survey. It shows that the potential impact in terms of tsunami generation, could be significantly greater if both the 500-mile-long 1964 segment and the 155-mile-long adjacent Yakataga segment to the east were to rupture simultaneously.

The study’s lead author, Ian Shennan, a professor at Durham University’s Geography Department, said: “Our radiocarbon-dated samples suggest that previous earthquakes were 15 percent per cent bigger in terms of the area affected than the 1964 event. This historical evidence of widespread, simultaneous plate rupturing within the Alaskan region has significant implications for the tsunami potential of the Gulf of Alaska and the Pacific region as a whole.

“Peat layers provide a clear picture of what’s happened to the Earth. Our data indicate that two major earthquakes have struck Alaska in the last 1,500 years [specifically, about 900 and 1,500 years ago] and our findings show that a bigger earthquake and a more destructive tsunami than the 1964 event are possible in the future. The region has been hit by large, single-event earthquakes and tsunamis before, and our evidence indicates that multiple and more extensive ruptures can happen.”

Tsunamis can be created by the rapid displacement of water when the sea floor lifts and/or falls due to crustal movements that accompany very large earthquakes. The shallow nature of the sea floor off the coast of Alaska could increase the destructive potential of a tsunami wave in the Pacific.

Earthquake behavior is difficult to predict in this region which is a transition zone between two of the world’s most active plate boundary faults; the Fairweather fault, and the Aleutian subduction zone. In 1899 and 1979, large earthquakes occurred in the region but did not trigger a tsunami because the rupturing was localized beneath the land instead of the sea floor.

Study coauthor Ron Bruhn, a professor ofgeology and geophysics at the University of Utah, said: “If the larger earthquake that is suggested by our work hits the region, the size of the potential tsunami could be significantly larger than in 1964 because a multirupture quake would displace the shallow continental shelf of the Yakutat microplate.

“In the case of a multirupture event, the energy imparted to the tsunami will be larger but spread out over a longer strike distance. Except for the small communities at the tsunami source in Alaska, the longer length will have more of an effect on areas farther from the source such as southeastern Alaska, British Columbia, and the U.S. West Coast from Washington to California.”

Warning systems have been in place on the U.S. western seaboard and Hawaii since the 1946 Aleutian Islands tsunami. Improvements were made following the 2004 earthquake under the Indian Ocean that triggered the most deadly tsunami in recorded history, killing more than 230,000 people.

Shennan said: “Earthquakes can hit at any time of the day or night, and that’s a big challenge for emergency planners. A tsunami in this region could cause damage and threaten life from Alaska to California and beyond; in 1964, the effects of the tsunami waves were felt as far away as southern California and were recorded on tide gauges throughout the Pacific Ocean.”

The study’s third author, George Plafker, ofPlafker Geohazard Consultants, said: “A large-scale earthquake will not necessarily create a large wave. Tsunami height is a function of bathymetry, and the amount of slip and dip of the faults that take up the displacement, and all these factors can vary greatly along the strike.

“Tsunamis will occur in the future. There are issues in warning and evacuating large numbers of people in coastal communities quickly and safely. The U.S. has excellent warning systems in place but awareness is vital.”

Research paper (includes map of single and multi-segment ruptures): Multi-segment earthquakes and tsunami potential of the Aleutian megathrust is available by clicking here.