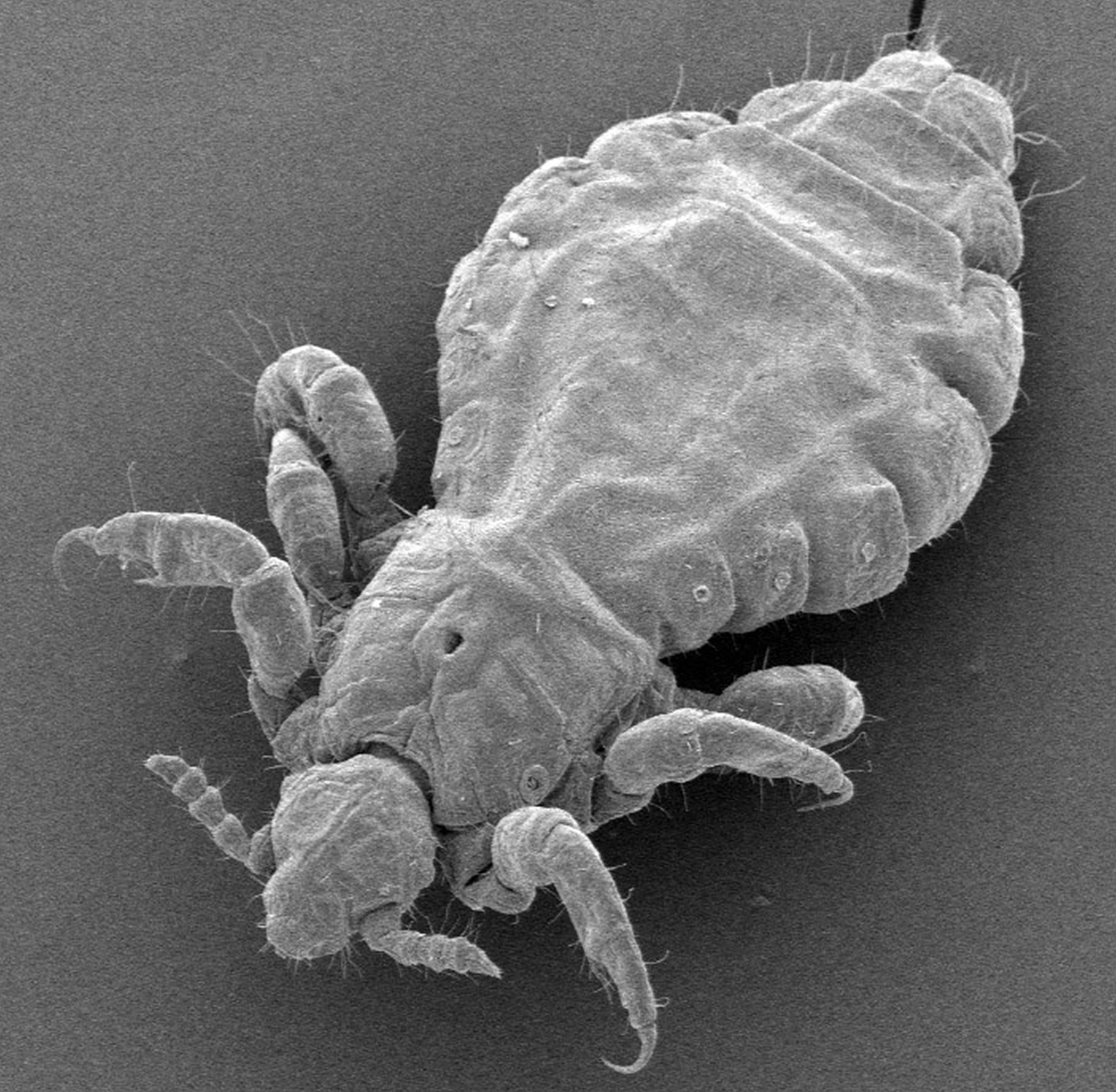 Oct. 4, 2004 — A University of Utah study showing how lice evolved with the people they infested reveals that a now-extinct species of early human came into direct contact with our species about 25,000 years ago and spread the parasites to our ancestors.

The study found modern humans have two genetically distinct types of head lice. One type is found worldwide and evolved on the ancestors of our species, Homo sapiens. The second type is found only in the Americas, evolved on another early human species (possibly Homo erectus) and jumped to Homo sapiens during fights, sex, sharing of clothes or perhaps cannibalism.

“We’ve discovered the ‘smoking louse’ that reveals direct contact between two early species of humans,” probably in Asia about 25,000 to 30,000 years ago, says study leader Dale Clayton, a professor of biology at the University of Utah. “Kids today have head lice that evolved on two species of cavemen. One species led to us. The other species went extinct.”

Alan Rogers, a co-author of the study and professor of anthropology at the University of Utah, says: “The record of our past is written in our parasites.”

The analysis of lice genes also confirmed two other key developments in human evolution. First, it verified studies showing how and when various species branched off the family tree of primates and humans. Second, it confirmed the “out of Africa” theory that the population of Homo sapiens mushroomed after a small band of the early humans left Africa sometime between 150,000 and 50,000 years ago.

The study will be published online Oct. 5 in the Public Library of Science journal PLoS Biology. The study’s first author is former University of Utah postdoctoral fellow David L. Reed, now assistant curator of mammals at the University of Florida’s Florida Museum of Natural History. Other authors are Vincent Smith of Scotland’s University of Glasgow, and Shaless Hammond, who worked in Clayton’s lab as a high school student.

Did Modern Humans Date Other Species – or Kill Them?

Transmission of the second type of lice from a now-extinct human species to Homo sapiens may have happened during mating, so Reed plans a study of pubic or crab lice – which only spread sexually – to confirm or disprove that possibility. Clayton and Rogers say it’s also possible our ancestors got the second kind of head lice by fighting with or cannibalizing another human species – or by sharing or stealing their clothing.

Clayton says evidence of contact between two species of humans is surprising because “Homo erectus has long been thought to have gone extinct hundreds of thousands of years ago,” although recent studies suggested Homo sapiens might have had contact with Homo erectus in Asia 50,000 years ago.

Reed says: “Not only did modern humans live contemporaneously with close cousins such as Neanderthals, but also with more archaic hominids such as Homo erectus, a species that we have not shared a common ancestor with for over a million years. It is amazing to know that we had physical contact with another species of human. We either battled with them, or lived with them or even mated with them. Regardless, we touched them, and that is pretty dramatic to think about.”

Reed wonders if contact with our species proved fatal.

“When scientists first determined that we (Homo sapiens) were contemporaneous with Neanderthals (Homo neanderthalensis) in Europe, it was suspicious that our contact with them immediately preceded their extinction,” Reed says. “Our study has provided evidence that we had contact with Homo erectus in Asia just prior to the extinction of that species as well. Did we cause the extinction of two other species of humans?

Our genes reveal the evolutionary history only of modern humans. Fossil evidence is scant for now-extinct species of early humans. Because lice evolved in concert with the humans they infested, lice “have recorded events in human evolutionary history in their DNA,” Reed says.

The researchers analyzed the physical appearance and genetic material (mitochondrial DNA) of modern human head lice, Pediculus humanus, to construct a family tree for lice showing when various species branched off from each other. Genes of modern lice also were used to reconstruct their population histories over time.

The researchers found the family tree of the lice closely mirrors the previously published family tree of humans and their primate ancestors. That was consistent with the well-known phenomenon that any single species or lineage of lice (like other parasites) tends to stick only to one species of host and rarely jumps to other hosts.

Scientists already knew that early ancestors of our species, Homo sapiens, diverged from other archaic humans about 1.2 million years ago. (There is semantic debate over whether those archaic humans should be called Homo erectus, or whether the name should be reserved for their more recent descendants.) The new study showed two almost identical-looking but genetically different strains of head lice diverged 1.18 million years ago. That indicates each of the two kinds of head lice infested a different species of early human as the human species diverged.

Genes from both types of head lice are found on people today, suggesting that after infesting Homo erectus or another archaic human species for 1 million years, the second louse type jumped from that soon-to-be-extinct species and onto Homo sapiens.

“In order for the archaic human lice to still exist on modern humans, archaic and modern humans had to coexist in time and space,” Clayton says.

What Lice Say About Theories of Human Evolution

Some of the findings conflict with two major theories of human evolution – the “replacement model” and “multiregional model” and instead fit best with a third theory known as the “diffusion wave model.”

(1) The replacement model says that after primitive human ancestors first left Africa about 2 million years ago, a second wave spread out from Africa sometime after 150,000 years ago and certainly by 50,000 years ago, and then replaced other now-extinct species of early humans in Africa, Asia and Europe without breeding with them.

Clayton says that model doesn’t fit the louse data because if Homo sapiens from Africa replaced archaic humans elsewhere without interacting with them, the type of lice on archaic humans would have gone extinct with their hosts instead of jumping to modern humans.

(2) The multiregional model says early humans from Africa and elsewhere in the world mated with other each other, so Homo sapiens gradually evolved in many regions worldwide. But if so much interbreeding occurred, the two groups of lice probably would not have remained genetically distinct for the last 1.18 million years, Rogers says.

(3) The diffusion wave model falls between the other two theories. Like the replacement theory, it says modern humans arose in Africa and spread across the world, Rogers says. Like the multiregional theory, it says those early humans mated with humans elsewhere. The diffusion wave theory adds a new twist, namely, that the genes of humans spreading from Africa came to dominate the modern human genetic blueprint because when they mated with archaic humans, the children were less fit.

“As they come out of Africa, they replace other populations while interbreeding with them,” Clayton says.

The findings in lice are most consistent with the diffusion wave hypothesis, which allows some interbreeding among various forms of early humans but also says the genes of early humans who left Africa came to dominate Homo sapiens, he adds.

The study also supports the controversial view that there was a “bottleneck” or reduction in the global Homo sapiens population to only about 10,000 people about 100,000 to 50,000 years ago. Rogers and others have proposed the bottleneck may have occurred because of a mass die-off of early humans due to a globally catastrophic volcanic eruption. Others believe the population bottleneck seen in human genes happened because only a small group of human ancestors left Africa in the second wave 150,000 to 50,000 years ago, then reproduced to cause a sudden population expansion.

The new study used the mutation rate in lice and comparisons of genetic differences among lice to find a similar population bottleneck in the group of head lice that infested early Homo sapiens, but no such bottleneck in the population of the lice on the archaic human species. That means archaic humans didn’t go through the same population shrinkage and thus must have spread their lice to Homo sapiens sometime after 50,000 years ago. Rogers speculates contact occurred 25,000 or 30,000 years ago.

The findings provide independent confirmation of the second “out of Africa” event because genetic analysis shows the population of lice – like their Homo sapiens hosts – also dramatically expanded after the bottleneck.